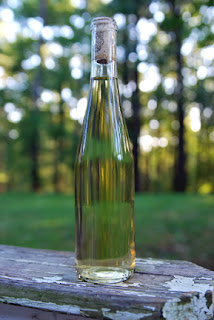 I don’t know how many times since I started making my own fermented beverages (2003) people have asked me if I was going to go commercial. I’ve toyed with the idea, I still often daydream about it, but I’ve never convinced myself that I am really that serious about it that I would make the jump to being a commercial producer. Despite being a driven individual I do have a sense that some things in this universe reveal and work themselves out in their own time, and I firmly believe this is one of those things.

Short of commercial aspirations, my motivations continue to be to learn about the art of fermentation, make tasty “house” beverages, and pay homage to my New England roots by applying fermentation to preserve the bounty of the harvest. Each year since I began I’ve experimented with different mediums, flavors and techniques to keep things exciting and to keep the learning rolling. Six years back I made my first mead, honey fermented into a wine like beverage, and while it came out good and went on to win a medal, nothing about mead really grabbed me then so I didn’t make another one until 2011.

In December of 2010 I walked through the front door of Moonlight Meadery for the very first time. I immediately met Michael Fairbother the owner and meadmaker. Michael was busy at the tasting bar for the grand opening in their new commercial space. Michael carefully explained what mead is, the different styles and his personal history with mead-making to the assembled. On the back of the tasting bar was an impressive lineup of different meads, their product line has grown quite a bit since, ranging from dry to sweet, and unflavored to those infused with fruits and spices. As I tasted each new flavor my mind was racing. How are these different styles made? Is honey a canvas waiting for an artist to release its secrets? Could I successfully make more mead? 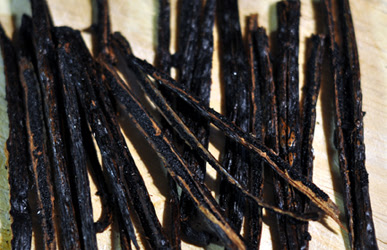 ( Vanilla beans ready for my mead. )

Madagascar, a mead flavored with vanilla, really caught my attention. Real vanilla flavor can be an intoxicating experience. It is decidedly savory and earthy, and when blended with the slight sweetness of the mead it is allowed to express an inherent warmth and a gentle bitterness.

I left Moonlight Meadery that day with neurons firing all over the place. I wasn’t immediately sure of what to make of the experience, but I did know that I needed to educate myself a little bit more on mead. Tune in next week for post with an overview of mead leading up to mead being the topic for #winechat on October 3rd.

A few months later inspiration hit. Having recently returned from a West Coast trip that involved several beer tastings I had orange flavor on my mind. I enjoyed several Wit beers with varying degrees of orange flavor, including a sublime offering from Santa Barbara Brewing. Orange and vanilla, what a killer combination! When I was a kid I was allergic to chocolate so in the hot weather a creamsicle was, and still often is, more my style. I figured if I used orange and vanilla in a fermented beverage it would be a like an adult creamsicle, oh how delightful! 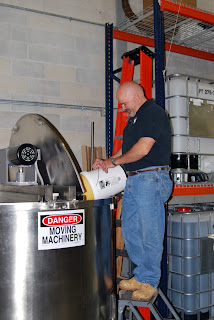 The recipe for my first mead in five years was decided (and the final product can be in the top photo). The process went smoothly, you can find the original recipe and some of the details at the WineMaker Magazine blog, and the result was beyond my personal expectations. A little orange, a little vanilla and whiffs of wildflower honey. Only slightly sweet, my new mead came off as complex and was immensely drinkable. As competition time rolled around I happily entered my creation hoping to get some useful feedback on where I could go with it. Boy was a surprised went it took first place in its category! The feedback was overwhelmingly positive from friends, both those who are knowledgeable about mead AND those who just love my fermented creations. This mead has gone on to take additional competition accolades, a very humbling result indeed.

I knew I could make it better though. And I planned to do just that in 2012. Before I set about planning my attack on the second batch I got an email that would serve to take this whole experience higher. Michael Fairborther, whom I have gotten to know both through the Brew Free or Die home-brewing club and my love of the products he creates, was interested in the recipe. But it gets better. He wanted to make a commercial version of my recipe in collaboration with me! And, wait for it, I would get to write a short paragraph to go on the side of the bottle as well as give the product a name! I was in shock. 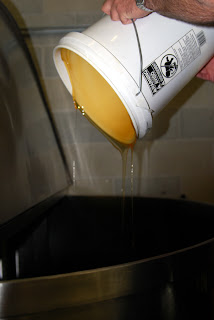 Everyone who knows me knows that I make the beverages I do first and foremost because I want to drink them. I’m pragmatic about my craft though. I’m not the best brewer or winemaker out there, and I’ve purposely kept my process low-tech and simple which hasn’t always been the best decision. I’ve made my share of crappy products and I try my darnedest to keep on top of the various batches of stuff I have going on so nothing goes wrong, or at least terribly wrong.

So it took me a bit to wrap my head around the fact that a successful commercial producer wanted to collaborate with me. If this person thought my recipe was likely to make a commercially viable product I had to think beyond my own personal goals and see this as a vote of confidence that my inspirations and efforts were bearing grander results.

I decided to name the mead Summer Love. I choose the summer theme primarily because of my initial inspirations (creamsicles) and added love to marry with Moonlight’s own theme of Romance By The Glass. The idea that a product born from a recipe of my own would soon be available commercially was exciting to say the least. 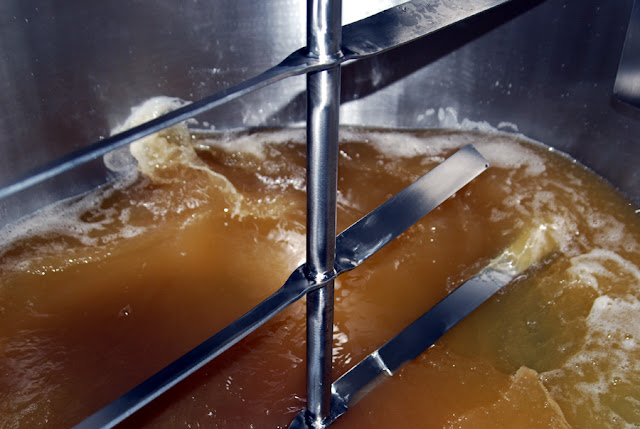 ( The mixer was a bit under-utilized for such a small batch, but it sure beats hand mixing! )

Time went by and I set about making my second batch, which is going to be better based on my pre-bottling tastings, and then the call came in. Honey was available and the desire to make a pilot batch was at hand. We finalized the details of the recipe based on the batch size, 40 gallons, and picked a date to make the new mead. As an aside, the name “Summer Love” has had unintended humorous consequences in Tweets and Facebook messages. Saying you are making summer love with somebody is a door wide open for jokes. Laugh freely, we do, it only adds to the story that this new beverage has around it! 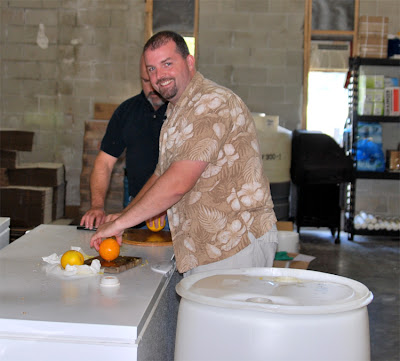 ( Chopping oranges for our creation. I didn't get a pic of me mopping the floor. I should have! )

I can’t really romanticize the process of making the mead, because I already knew how to make mead and a 40 gallon batch isn’t really a stretch in terms of equipment and process from my own enterprise. But, I had a blast doing something I love in a different way with people who are even more passionate about it than I. That's that's real life and a story worth telling! ( Me, Michael and Rick. Thanks for the fun day guys! )

I've spiced the pictures from the day throughout this post and they tell the story better than words. I very much enjoyed being able to spend the time with Michael and Rick bringing this new beverage to life. I was on site to work and I did anything and everything I could to help, including mopping the floor. 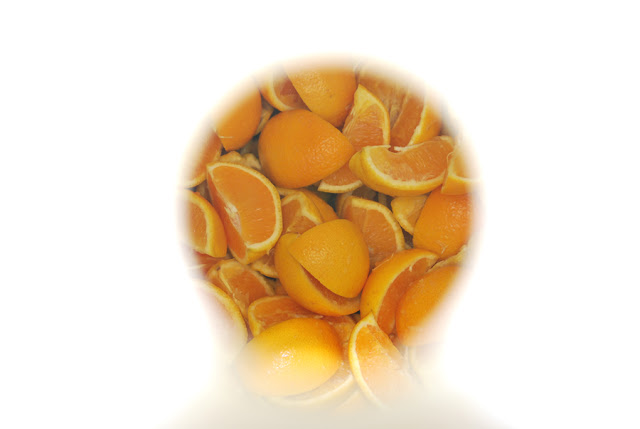 ( Oranges through the port hole of the fermentation vessel. A rare artsy shot from me! )

Hopefully Summer Love will be finished and in the bottle for the holidays. The last report was that the fermentation was complete and it would soon get dosed with vanilla and be allowed to settle and age. I will definitely be letting everyone know when Summer Love is available so we can buy it all up and enjoy something new and different from Moonlight Meadery and Ancient Fire Wines!

Next Monday I will be posting an overview of mead, including a little history, notes on different styles and additional details of my mead-making projects from 2011 and 2012. If you would like to learn more about mead, and from Michael Fairbrother directly, join Moonlight Meadery, Marie Payton and the crew from #winechat on October 3rd at 9PM on Twitter.