I met a new foodie friend last night who was talking about the food product his family makes and how the nostalgia around the product should be part of future branding changes. An excellent idea for sure.

Nostalgia is not generally a sentiment I personally project. I typically live for today and tomorrow. This has always been true to some degree, I was always looking and thinking around the next turn and often forgetting the last step I had taken. This has certainly been magnified since my cancer diagnosis and treatment in 2003 but only for the better. That doesn’t mean the past doesn’t influence me, it just means I don’t carry the past close or very consciously.

Back to the story about food on television which does require a trip down memory lane. I’m starting in the mid 90’s, which is arbitrary AND not the beginning, instead it was the tipping point for Margot and I and our food obsessed lifestyle.
From the moment we got the Food Network on cable we were glued to it. We watched Door Knock Dinners (Gordon Elliot), Food 911, East Meets West (Ming Tsai), Grillin’ & Chillin’ (Bobby Flay), Essence of Emeril and many others. This was only a few years after the network launch so these were the NEW shows and ultimately some of the rising stars of the network. Along the way we have been avid watchers of Good Eats (Alton Brown), Iron Chef (original for laughs, new one for content), 30 Minute Meals & $40 a Day with Rachael Ray, Emeril Live!, Boy Meets Grill & Throwdown (Flay), Ace of Cakes (Duff), Alton Brown’s Feasting on Asphalt & Waves, Diners, Drive–ins & Dives (Guy Fieri), Unwrapped, biographies, holiday specials, and the list goes on.

Ming Tsai inspired us to take a course on cooking Dim Sum at the Cambridge Culinary Institute, something we have used several times since. Emeril’s restaurant NOLA was on our itinerary on a trip to New Orleans in 1999. Margot and I have always eaten well with the inspiration we have gotten from these shows, sometimes too well. 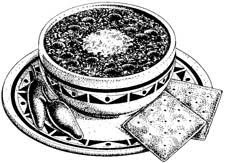 Farther back I remember watching re-runs of The French Chef with Julia Child and catching Yan Can Cook with Martin Yan, both on the local PBS channel in Connecticut where I grew up. Reality Food TV was in the kitchen at my home where Mom did a great job getting me interested in food and cooking. If only I had filmed it!!

I believe I can safely say that food related TV is the number one type of TV that has penetrated my eyeballs up to this point in my life. That isn’t likely to change.

Tripping over the Travel Channel (majority owned by the same company that owns Food TV) we also discovered No Reservations with Anthony Bourdain. This show was a real eye-opener for us showcasing foods from exotic locations we had never dreamed of. We like him too, because like us he says what he thinks and lives in the moment. We have watched Man vs. Food a bit and some other the Travel Channel’s food related specials. It can get to be too much some weeks!

About two years ago we got the Fine Living Network and discovered the show Three Sheets, a study of beverages and drinking cultures around the world. Thank you Zane for taking one for the whole team, I learned a lot!

The Fine Living Network (owned by the same company that owns the Food Network) recently re-branded itself as the Cooking Channel. Margot and I are once again hooked. Sitting down and flipping on the new network feels like the old days with new shows and new ideas. We still have some core shows we watch on Food TV, but we aren’t much for the reality competition shows. The Cooking Channel with that exact change in format rescues us from that depression. Already I have filled up the DVR with tapings of Drink Up, The Thirsty Traveler, Indian Food Made Easy and Foodography. I even caught the tail end of an episode of The Galloping Gourmet yesterday. I vaguely recall seeing that show before, and what a personality Graham Kerr is! The word is that this channel will have new programs from some of the Food Network elite, like Emeril and Rachael Ray. While that will most likely be a good thing, I am hoping for a healthy mix of new faces and their influences to show up in my living room.

Yesterday afternoon while taking a quick walk on the treadmill I caught the last half of the "Summer Cocktail Party" episode of Boy Meets Grill. In this episode Bobby Flay hosted Ted Allen for some grilling and good times. After the last two days of stuffed steak in collaboration with The Manly Housewife I couldn’t help but think that that was two of us on the screen sharing our love of food and good company with the world. It is truly great to be able to do something you love and share it with other people who are passionate about the same things.

One of the newest Food Network shows we have enjoyed is titled Spice & Easy. In one segment the host, Janet Johnston, made a spiced soda from star anise, pink peppercorns, allspice berries, citrus peel, thyme, sugar and club soda. Pretty cool! We tried it and it is excellent. Check it out at http://www.foodnetwork.com/recipes/savory-spiced-soda-recipe/index.html

Are you addicted to food on television? Leave a comment with your favorite show, recipe, chef or memories you have of food on TV. Is there something you don’t like or thought was a terrible idea, share it! Let’s all walk down this exciting path through the food and television memories most of us have!

I had to turn off my tv because I could spend my entire afternoons watching food network. OF course LOVE 3 sheets (maybe not the episode when he drinks the bug/lizard fermented alcohol), bourdain in any shape or form and then there was a show when Daniel Boulund has people over for dinner and they just drink and talk. No favorites but I would love to live in Michael Chiarello's house.

there are so many food shows on tv now, that I find myself still just watching the classics...Like the Barefoot Contessa, Giada , and anythng with Julia Child. I like some of the new foodie stars, but some of them just bother me..lol...oh well

I love watching Julia Child and I have seen several others here and there...
Great post by the way!

My mom would seldom hate me for watching food network almost everyday. She can't watch even news!

I don't watch Food TV network, as much as I used too. Every now and then I watch Throwdown with Bobby Flay or Diners Drive Inns and Dives with Guy Fieri or sometimes, Giada at Home, but I like her most in Everyday Italian.
Like Chef Dennis' comment here, some foodies stars just bother me too.

This is going to be cliche' but Julia Child, i would watch her with utter amazement and awe, never ever thinking that i would be able to make anything that she did.
Then the Food Network hit. I was attached to the television all day.
Now look at us all!!!
great blog!