How Foodies Celebrate a Wedding Anniversary

Thirteen years ago Margot and I were married. For the last four years celebrating our anniversary directly coincided with our Relay For Life involvement. This meant it was either on the day of the event or on one of the nights leading up to it where we are turning in our donations or packing up gear. Simply stated, in those years we spent more time preparing for Relay than celebrating our life together on our anniversary. As a cancer survivor who enjoys each day I have in the bonus round this wasn’t horrible, but still kind of a drag. Although, two years ago when our anniversary was the second day of Relay I did bring Margot flowers right after midnight. We both walked the track in the early morning with a smile, and then had deftly prepared egg, ham and cheese sandwiches from the Relay snack bar! When we heard that this year’s Relay was going to be the 25th and 26th of June we were rejoicing. We would get to do something for our anniversary AND get to participate in Relay, and separately. Oh, the joy! 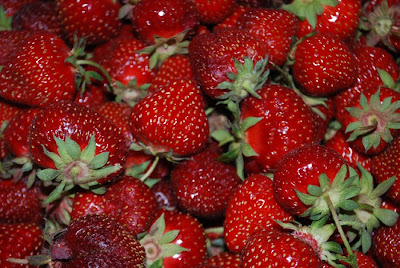 (they have no idea what I plan to do with them...)
Margot remarked about how romantic it was for me to get her up at 7 AM on Saturday so we could go pick 45 of the 80 pounds of strawberries we needed for this year’s award winning (7 medals to date) wine. The picking, cleaning and processing was not romantic, but the fact that the berries will be used to make wine that we both love and have been hugely successful with is a nice romantic vision.

Backing up for a minute I’ll note that Margot loves Indian food and I whipped up some new Indian dishes on Friday night after watching some recent episodes of Indian Food Made Easy on The Cooking Channel. I prepared homemade paneer skewers with pepper and onion and served it alongside a Bengali style Dal and Naan bread. The links to the recipes I used are below. I’ll write more later this week on our ongoing adventures with Indian cuisine.

For dessert I made the Pomegranate Gelato brought to us by the Merry Gourmet earlier in the week. I think it is fitting that she was using a dormant wedding present to make hers, and I own the same device, which I was using to celebrate my anniversary. AND, we both got married in June of 1997. How is that for coincidence! I’ll be posting a comment on her blog once this goes up so she can see what she inspired. The gelato was creamy in that way it should be, making the difference to ice cream very apparent. It had a wonderful fruit flavor with a healthy dose of citrus. Below is the modified ingrediant list I used based on what I had available in my kitchen. The preparation was otherwise the same as the recipe linked to above.

For breakfast on Saturday morning I combined some of the paneer from the night before with a recipe for a caprese style frittata that I saw in the Cookin’ Canuck blog. It was light and fluffy with a nice mix of flavors from the tomato, basil and cheese. Along with some three cheese semolina toast from the grocery store bakery it was a good start to a fun day! 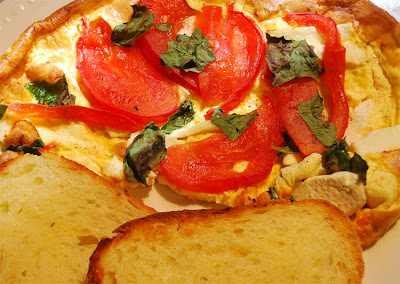 (caprese style frittata)
After the strawberry fest, we went for a nice hike around what used to be Benson’s Animal Farm in Hudson, NH. The town of Hudson and many volunteers have revitalized the defunct park into walking trails and picnic areas that are worth a visit. The ghost park was cool to see. Something about seeing human footprints stuck in time fascinates me. A big thank you to Melissa K for the tip on the trails. 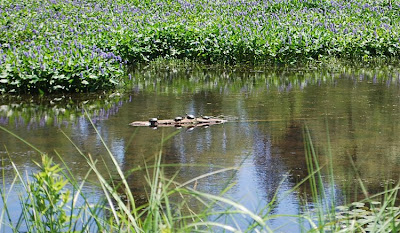 (there are wild animals at Benson's, not just the same ones from days past!)
One thing Margot had planned ahead of time was to have some wine-themed movies around to watch. We did end up seeing Sideways again (the last time was in the theater when it first came out) which was a hoot. I like Merlot, Pinot Noir and California Chardonnays with secondary fermentations and oak. Take that Miles! We also watched Bottle Shock, a more recent film about the California upset at the much written about 1976 French and American wine tasting competition. For a movie based on a true story it was very well done, funny and informative (to a degree) for wine enthusiasts. We couldn’t find A Walk In The Clouds on Net-Flix so we missed out on another viewing of a movie that Margot is still surprised I actually like. It is a about a wine-making family, I don’t need much!

On Saturday night we went out for Chinese food at Super Wok in Londonderry. We hadn’t been there in years and some advance research suggested that new management and a new kitchen philosophy would show up in the food. And so it did. We arrived a little after 7 PM to an empty dining room. We were promptly seated and taken well care of. We ordered a Pu Pu platter, General Gao’s Chicken and Crab Rangoon which recreates our classic menu for these types of restaurants. A bit of nostalgia I guess to celebrate our anniversary. All of the food was very well prepared, hot and tasted as you would hope it would, clean and with a minimum of oil. This turned out to be a real treat for us and is sure to draw us back again soon.

On Sunday we went out for lunch to the Republic Café in Manchester, NH. Margot wrote about the experience yesterday at http://ancientfirewineblog.blogspot.com/2010/06/republic-bistro-cafe-manchester-nh.html. I will say that the leisurely lunch afforded us the opportunity to talk about some of our recent food adventures and plans for new ones.

Along with and in between the weekend’s activities we did tend to a few of our new batches of wines and cracked open a few bottles of our own to celebrate. I was reminded of one of the wonderful reasons I make my own wine, you have lots of choices for special occasions.

That’s how a couple of foodies from southern New Hampshire celebrate a wedding anniversary.

That is a beautiful story! Very sweet and romantic and fitting with your lives and passions.

What a great story! My husband and I will celebrate 12 years in September and boy time flies! Love the sorbet - will have to make that one. Not sure if you have seen "Bottle Shock" but it is a great wine movie.

I love your post. Happy Anniversary to both of you.

Congratulations, Jason and Margot. Many of us get to the "bonus round" in very different ways, and as you say, there so much to be grateful for in this life. I'm glad to have "met" you both this year. Many happy returns.

It sounds as though you had a wonderful anniversary celebration and that you made a beautiful meal for your wife.

Very very romantic! I cannot believe you went to where Bensons used to be, i haven't heard that name in eons!! trails? Do tell!
Love the caprese frittata.
Sooo, about that wine ;)

Hi Jason, Congratulations to you and Margot and many happy returns.