The BostonBrunchers Land a KO with KO Catering & Pies

I was one of the lucky winners of 7 spots for brunch at KO Catering & Pies this past Saturday. There were several exciting aspects to this occasion for me including meeting new-to-me Boston food bloggers and getting to eat food from KO again.

KO has a small space designed for take-out on A street in South Boston. The kitchen space also functions as their base for catering and a truck that will be opening in 2011.

Our host Kara greeted us all as we arrived. KO had prepared a table for us to enjoy our brunch at with favors (Tim Tams!) for each of us to take home. We are invited to order anything off of the “Brekky” menu, which was complimentary for our event, with several special treats planned as well. We’ll get back to the food in a moment. 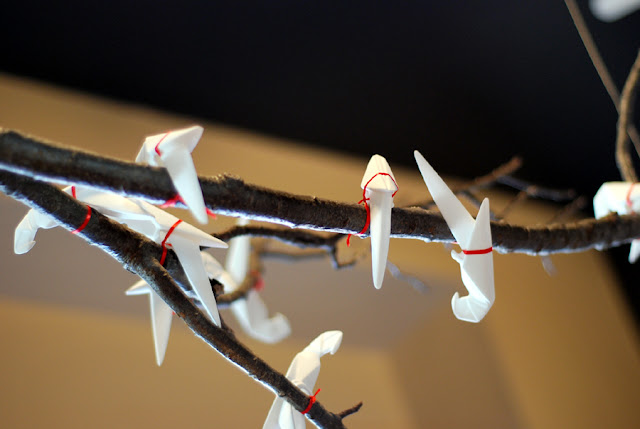 This week I met my first Boston-area food bloggers. Only being in the city three days a week for work affords fewer opportunities than I would like. Connecting with a community of folks dedicating their time to food and beverage topics like I do is a key step in broadening my experiences, sharing my own and keeping the blog rolling. At this event I met Katie, Athena, Daisy, Rachel, Elizabeth, Kimmy, and our BostonBrunchers host Renee.

You can’t go wrong with a gang like this! The conversation ranged from what Vegemite is to whether you would trade a dishwasher for a washer & dryer in a typically small Boston apartment to dogs snoring at night to where to get a great burger in town. That’s a lot of ground to cover. Thank you to Renee for organizing and it was so exciting to meet everyone, something that seemed to be shared by all.

Kara indicated that our first special treat would be Vegemite on sourdough toast. I knew of Vegemite, a yeast extract spread, but had never had it. Some research ahead of time yielded the knowledge that Vegemite was originally made from spent brewer’s yeast and blended with spices to produce what has become a staple of Australians. I was prepared that it would be very salty and that stereotypically Americans don’t like it. Interesting. 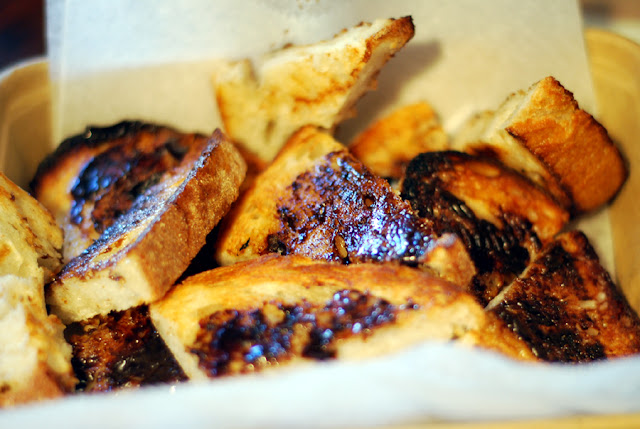 ( looks can be deceiving, but not this time. ) 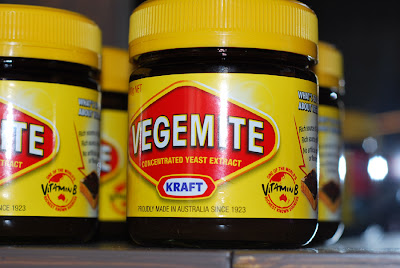 The most straigtforward way I can describe it is that it tastes like very salty beef gravy. With some butter on sourdough toast it is excellent, and I can’t really see where any dislike would come from; except maybe the saltiness.

Elizabeth ordered the granola and passed it around to share. Kara indicated that they make it on site. It was very sweet and crunchy with what looked like dried cranberries, apples and bananas in it. I could see eating this for breakfast with some vanilla yogurt. 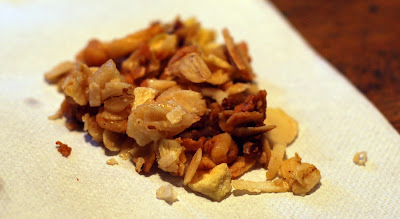 I was last to order and at that point the menu had been covered pretty well, except for the Croque Monsieur. Feeling like we shouldn’t leave a man behind I ordered it. Smoked ham and provolone on sourdough bread grilled to a golden brown. The ham was very flavorful and the cheese was melted all over the place ensuring everything in one bite. As some of my readers well know I have a weakness for cheese and bread so getting some more of the sourdough bread was alright by me!! 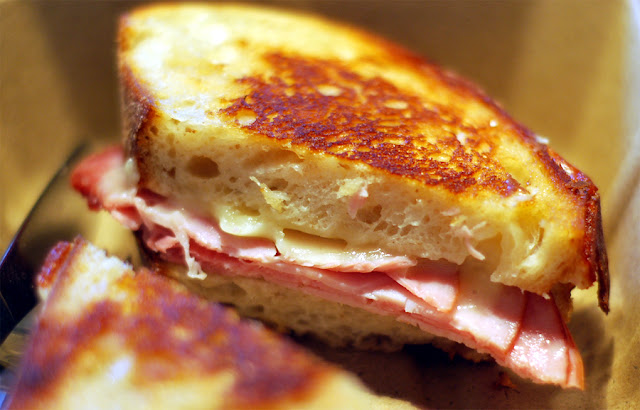 I took some pics of a few other dishes as they came around. The cold food after photo shoot food blogger joke created some good laughs. 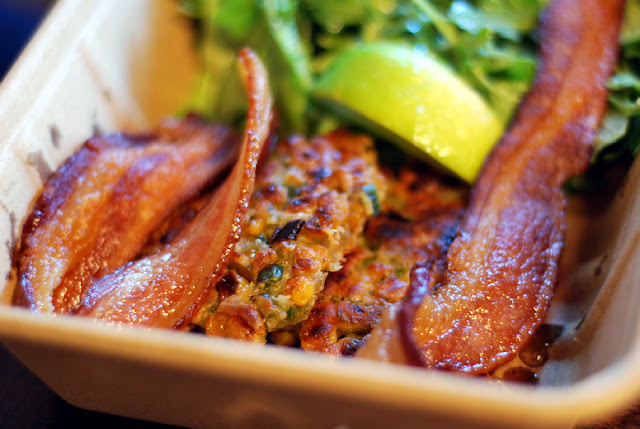 The final special treat was the sausage rolls. When Margot and I had the KO pies at the Wine Riot in October I don’t recall seeing the sausage rolls on the menu. When I first took a look at the shop menu in anticipation of the brunch I knew I had to try some one way or another. First the photo. 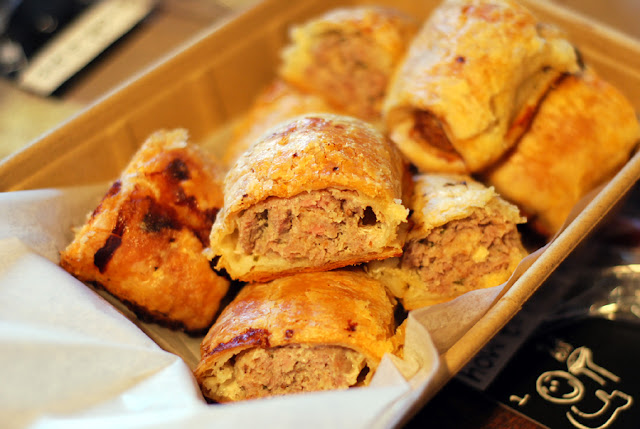 ( that will keep you coming back! )

Kara explained that they source the sausage from a local polish butcher and add their own secret blend of herbs and spices wrapping it all in their flaky crust. I hadn’t yet heard anything that would change my mind. The texture of the sausage was wonderful, so soft and yielding. The spice blend was balanced nicely and the finish with the crust surely made me happy.
A final act of sampling was set in motion with the order (Elizabeth again who has a self-professed sweet tooth) of one serving of the Sticky Date Pudding with Butterscotch Sauce and Vanilla Ice Cream. I had one small bit of this and it was amazing. I might come back for just this sometime! It had lots of flavors going on and was warm and sweet. A great way to finish a fantastic meal. 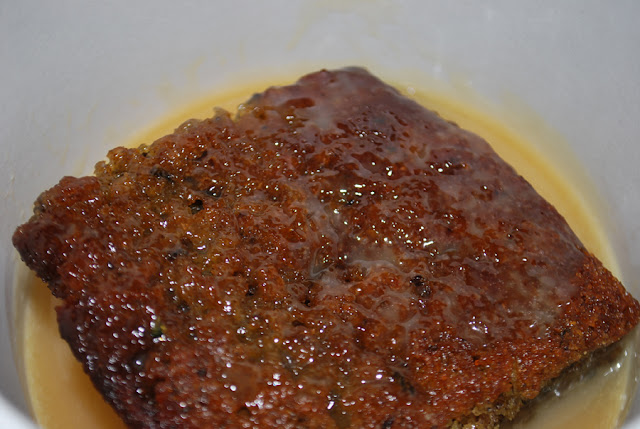 ( it looks so good and it follows through! )

Australians definitely have a sense of humor. As evidence I offer the caption below the clock showing the local time hanging on the wall. Pie time!! 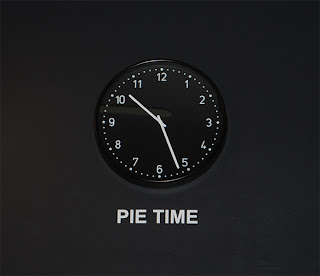 There was a flurry of activity at the register before we all headed off to our respective next destinations. I ordered four pies and two sausage rolls to bring home for future enjoyment. I felt like I need a security guard to keep my treasures safe!

I took a few shots of treats waiting in the warmer. If this doesn’t make you hungry you might want to check your pulse. 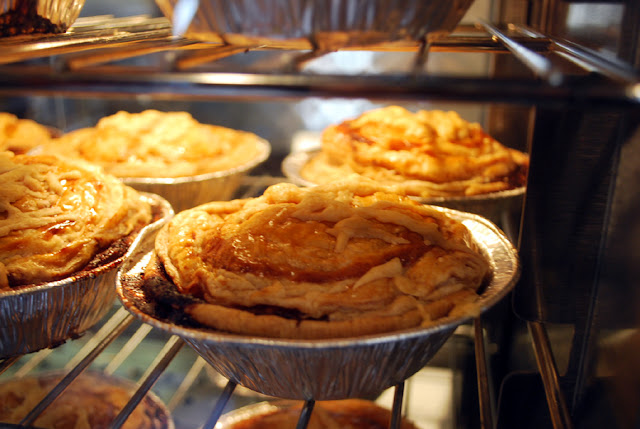 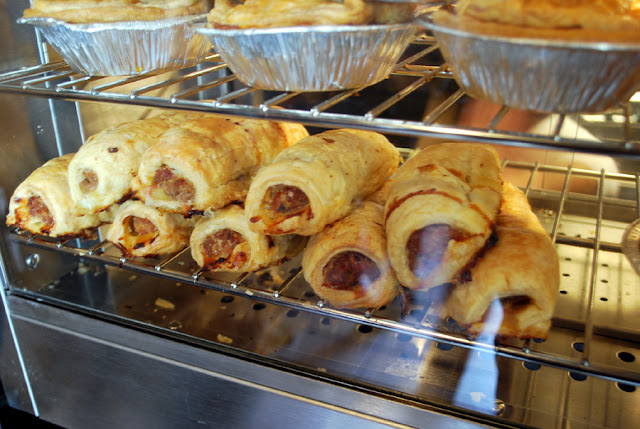 I am looking forward to future opportunities to go out with the Boston Brunchers. Monthly events are being planned and the mix of faces at each event will likely change so there should be something new for everyone in the coming months. You can follow the group on Facebook and Twitter to keep up with what is going on and when the next chance to win a spot will be.

A huge thank you is must for KO Catering & Pies. Both Kara and Sam took great care of us on Saturday morning. Much thanks also goes out to Renee for organizing the event. She was talking about logos and the web site for the group during brunch. Hardcore! 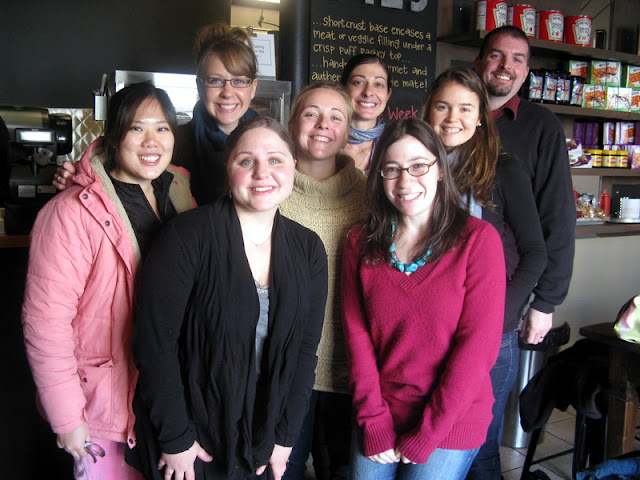 ( the BostonBrunchers at KO. photo thanks to Kimmy. )

You see lots of smiles and from the wrap-up above I am confident this should be no surprise. I enjoyed my time with the Boston Brunchers and hope some of my readers will check out KO Catering & Pies when they have the chance.


Disclosure of Material Connection: I received one or more of the products or services mentioned above for free in the hope that I would mention it on my blog. Regardless, I only recommend products or services I use personally and believe will be good for my readers. I am disclosing this in accordance with the Federal Trade Commission’s 16 CFR, Part 255: “Guides Concerning the Use of Endorsements and Testimonials in Advertising.”
Posted by Jason Phelps at 8:45 AM

great write up Jason! you take fantastic pictures. it was wonderful to meet you. hope the party and your winter beers were a success!

Great write-up! So happy to finally meet you. We must do it more often! I'm glad you grabbed the picture, I totally blanked on sending it along. I have holiday brain! :-)

It looks like you guys had a really great time! I've added KO to my list of restaurants to try. The corn fritters with bacon and avocado look especially good to me... and there's no way I would shy away from extra sourdough either!

Great meeting you and hope to see you around soon!

You got such gorgeous photos! It's Sunday morning and I'm totally craving it all right now. A return visit is totally in order for the sticky date pudding. Great meeting you!