Southern New Hampshire has lots of beverage action these days. I caught two events this past week, a bubbly tasting at The Drinkery and the grand opening of the new space for Moonlight Meadery.

I realized I had a broken camera lens this week and my backup point-and-shoot and other lenses weren’t doing it for me. Lighting also challenged me. While I am learning a lot as a take each new batch of photos, it sure can be frustrating!

A Bubbly Tasting at the Drinkery

Joan at The Drinkery has been lining up events to showcase her inventory and provide opportunities for local makers and distributors to engage her patrons. This past week she lined up five different bubbly’s just in time for holiday entertaining. 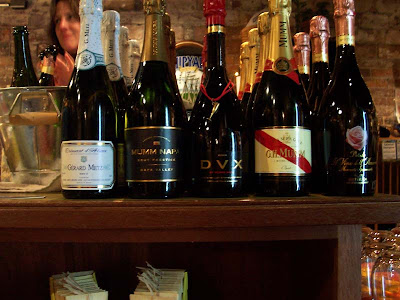 Mumm Napa Brut Prestige
This was the only of the lineup I had had before and I never turn down an opportunity to taste some bubbly! This sparkler has flavors of sour green apple with lots of small bubbles.

There was a flavor here that I could place. I conjectured quince and Joan had some quince spread handy for me to compare the flavor with. It wasn’t conclusive. Several of the tasters, myself included, agreed there was some bitter almond in the finish. I had never had a cremant before and I am naively assuming the differences from other sparklers are due to style.

This sparkling wine was a real treat. The aromas coming off this glass were truly intriguing. One sip and I realized I was tasting something unique. Fruit flavors were in wonderful balance with vanilla. I also found flavors of buttered toast that I often associate with oaked Chardonnay that I never expected to be there.

This was the only Champagne in the lineup and had well balanced flavors of herbs and citrus. The level of dryness made with think it should be an Extra Brut, but that may have been due to fatigued taste buds.

A wonderfully sweet sparkling wine to finish the tasting with. A very perfumed nose and lots of peach flavors made me smile.

Any of these sparklers would serve you well for holiday celebrations. If you live in the Londonderry, NH area and need any of these items be sure and pay Joan a visit at The Drinkery.

I don’t have a lot of experience with mead so it is with much excitement that I can say a new meadery has opened 3 minutes from my house!

Michael Fairbrother is the proprietor of this new business and based on the information on the web site he has over 15 years of mead-making experience. I also know that he has been a long-time member of Brew Free or Die (BFD) a New Hampshire based home brewing club. Getting to know the members of BFD is on my 2011 agenda.

I popped in during the grand opening of the new space and tasted a couple of meads.

Michael suggested that I try their Sensual, a traditional mead. I found it dry and refreshing with a some nuttiness and a bit of alcohol in the finish. I had heard he makes a pretty mean blueberry mead, named Wild, which reminded me of a light, dry red wine. I am betting it could be paired similarly to a Chianti or a Beaujolais. To cap off my short visit Michael suggested the Desire, made with black currants. I have made black currant influenced wines in the past so I was very excited to try another variation. It smelled like sautéing fruit with plenty of sweetness to go around. This style of mead was the Northeast Regional Homebrew (hosted by BFD) Best in Show winner for 2009. Seems well deserved.


I took home bottles of Desire and Madagascar for future enjoyment. A gift, because he can’t legally sell it yet, of a bottle of a braggit a honey brew made in a Russian Imperial Stout style was included with my purchase. I have already enjoyed this and have to say that the blend of beer and mead ingredients makes for a wonderfully unique experience, one a might have to attempt to recreate.

I also asked Michael if I could contact him in the new year to talk about what he went through to launch his business, something Margot and I have been thinking about for a number of years now.
Check out the Moonlight Meadery web site for the mead lineup, location, hours and special events.