Do We Need an Excuse To Drink Red Wine?

The easy answer is no. As long as it is good, of course.
Last weekend I tried a couple of reds I hadn’t had before that were worthy of reviews. The Chianti was specifically selected to test the go-to pizza pairing for many sommeliers. We also paired the pizza up with our 2008 Montelpulciano. That particular wine ended up being very understated and simple, but not totally off the mark for the table versions of it that are commonly found in abundance in the central and southern Italy. 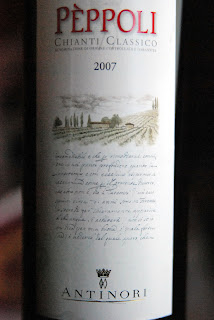 I haven’t had many Chianti’s that wowed me. Most people I know would believe that to be a fool’s quest. I don’t buy it. I am sure that there are finer versions of Chianti to be had, and that they are produced with the kind of care that so many other revered styles are. The Antinori Peppoli was definitely one of the best ones I have had, but I still feel there is room to grow from here. I found the aroma to be pretty even between red fruits and oak/earth. The flavors of ripe red raspberries, vanilla and bitter dark chocolate were carried along a moderate to long finish. The tannins were pronounced but soft in nature, not creating a significant teeth cleansing sensation. The wine paired well with both a supreme pizza that contained several meats and vegetables, and a mushroom and onion version. The mushrooms were specifically accentuated up against the earthy, oak flavors in the wine. I’d drink this wine again, but I do consider it as a place to continue to search from.

I have struggled to find a consistency in the fruit flavors in this wine. The nose is very light and while the color is good, taken together it is a pretty unremarkable wine. My lack of knowledge (of the grape and the typically outcome) at the time I made it prevented me from taking the choice to blend a little bit of Sangiovese and Merlot into it to add complexity. It is drinkable, but not exciting. It did do an admirable job with the pizza however. It handled both pizzas well, but didn’t work any magic on either; something appropriate when the folks eating and drinking weren’t really interested in being mindful of the pairings. I won’t ever make this exact wine to be sure, and when I want to make something Italian again, experimentation with Sangiovese and a Super-Tuscan style is most likely. 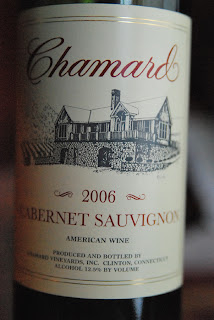 In 2010 Margot and some of her girlfriends visited Chamard Vineyards in Clinton, CT for a tasting of their wines. Having experienced CT wines previously Margot was prepared for their generous acidity and their distinctions from wines made elsewhere from the same grapes. Of all of the wines tasted Margot decided the Cabernet was the best. Her friend Julie agreed and I got the prize of a whole bottle to enjoy. I picked up aromas of raspberries and leafy greens in the nose. The flavors of plum and blackberry came with the expected dose of acidity and subtle wood influence. This was a very pleasing wine and raised my curiosity to try their other wines despite Margot insisting this was the very best one they tried.

Great post :) I recently discovered wine .. shame huh!! I am more of a vodka/beer gurl .. but better late than never right ? and now all i drink is red wine :)

I certainly don't need an excuse to drink red wine.

The problem with being a Canadian is that our liquor prices are so controlled that the bottles I would recommend might not be good recommendations or priced outside of Canada. Boo!!

I don't need an excuse to drink any wine :D

I don't think we need an excuse to drink wine, or any other beverage for that matter. However, your Chianti tastings can take quite a while to find one to drink without an excuse. I'm not a fan to the dismay of my S/O who would prefer Chianti. I've tasted so many with over-powering tannins for my palate - not to mention that our foods are not complimentary. This is the perfect example of drinking what you like (for my S/O) and enjoy!