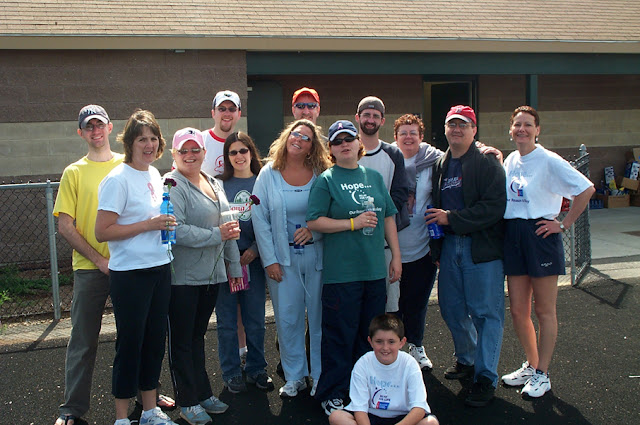 ( Our first Relay For Life team, June 2004. )
In February 2003 I was diagnosed with testicular cancer. Through swift action on my part (calling the doctor) and a great team of doctors and nurses I underwent surgery, radiation therapy and got well in about 5 months. This event started two things that continue to do this day that I am immensely proud of. The first was a renewed commitment to fundraising and volunteer work, and the second was making my own beer and wine.

If you have poked around my blog for a bit you've gotten a sense of my adventures with home brewing and home winemaking. Margot asked me if picking up a hobby would be better than working all the time now that I was well and desirous of appreciating my second chance at life. I agreed, and the rest is history.

I have roots in community service, volunteering and fundraising. I am an Eagle Scout and was an active volunteer and fundraiser with the Boy Scouts, my hometown church and local organizations for many years before I went to college. In college I joined a fraternity that had a commitment to community service, something that resonated with me based on my background. After college my volunteering waned in favor of my career, but I donated to charities as much as I could during that time. After having cancer I found that my roots in giving back were re-invigorated. I wanted, no, I needed to give back. I needed to be an example for others of the hope we all must have to fight cancer. 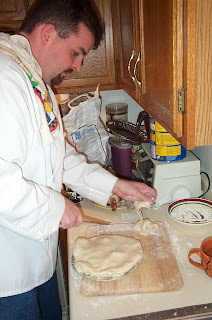 In June of 2003, only two months out of treatment, my wife and I participated in a walk for prostate cancer on Father’s Day. Later that year we linked up with the Lance Armstrong Peleton Project and made 100 apple pies by hand (see me hard at work to the left) to raise money to fight cancer. Margot and I also attended our first Making Strides Against Breast Cancer walk, and event sponsored by the American Cancer Society. That event was in Boston and five minutes after I got home from it I went looking for a similar event in New Hampshire. I found the local Strides event in Manchester,NH would be held the very next weekend and promptly volunteered to help setup and cleanup. At that event I was introduced to the event chairperson for the Manchester Relay For Life, an event I had heard of through my mother’s research during my treatment. Without thinking about it, and getting in trouble for it when I got home, I volunteered to be the survivorship committee chairperson for the Relay that would be held in June of 2004. For that event my wife and I also formed a team of fundraisers and walkers, Survivors Rule! The team is composed of family and friends who all look forward to our annual events.

Food related events have been key to our fundraising. We have hosted a chocolate party, made chocolate baskets, held wine tastings and made pies several additional times, all to fight cancer. Wine tastings have become a flagship event for us, something that as a winemaker I can wholly embrace.

While our involvement with the Lance Armstrong Foundation didn’t continue as their events program has evolved, we have developed a strong relationship with the local American Cancer Society office participating in both Relay and Strides in every year since 2004. I have had the honor of being a speaker at many events, have participated in advocacy work with local politicians and made so many friends through involvement in these activites. I often look back and wonder how in the world this all happened. 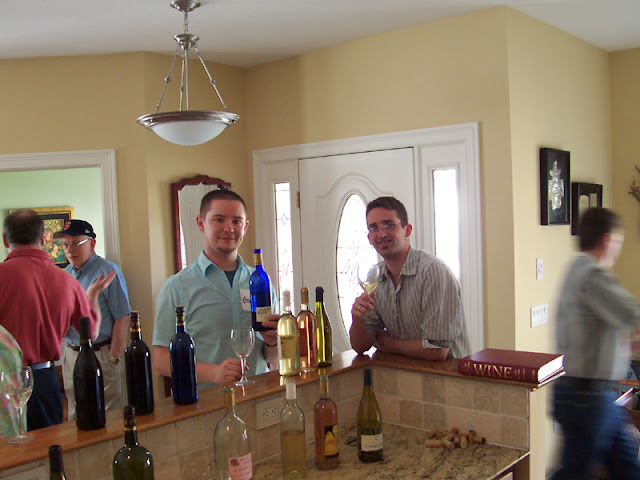 ( My brother, on the right, and his friend Geoff at one of our wine tastings. ) 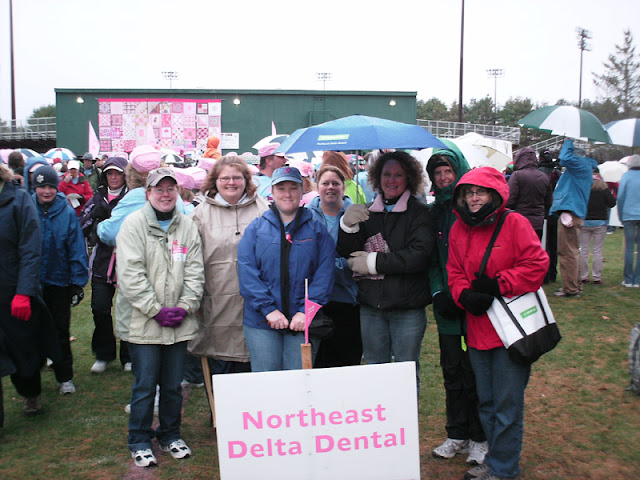 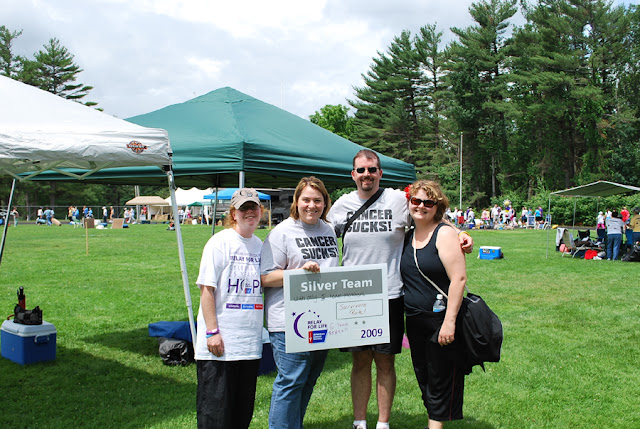 ( Tired & sore having completed another Relay For Life! ) 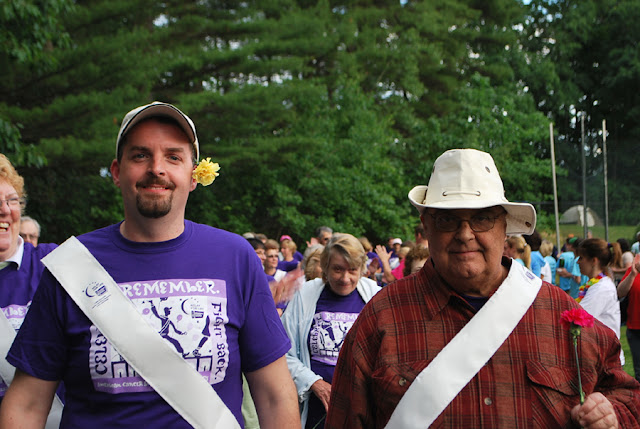 ( Me and Margot's uncle Gerry, also a cancer survivor. )
One of the most astonishing things that has come from all of this is how much money we have raised. Since 2003 the Survivors Rule! team has raised over $72,000!!! I always tell people who ask about this that if you had told me 8 years ago that I would be saying that now I would have likely fallen out of a chair laughing at your insane blabber. Our team has been the top fundraising team at our local Relay in 4 of the last 5 years and is the most successful (in $$ raised) in the event’s history. I get choked up just thinking about how much our support has helped and how many people we have reduce suffering for.

In late 2010 Sarah from the OC 2 Seattle blog put out a call for food bloggers who use their blog to support local charities. I responded with made the caveat that I hadn’t really used my blog to promote my events, but had used my culinary and winemaking skills to raise money and give back. It did occur to me that since changing my blog format in April of 2010 that I may have missed an opportunity. You can see what Sarah ultimately wrote about my team’s exploits in her blog.
Sarah shared her surprise as to how a relatively small group of people had accomplished so much and in such a short time. She could tell I was quite proud of the accomplishments and had an eye to a new year for fundraising and giving back in 2011. She suggested that I consider harnessing Social Media (Twitter in particular) to add virtual attendance to wine tasting events and broaden my call for support. I have to thank her for pointing this out to me, for some reason I hadn’t yet made the link.

In March and April, the dates are not yet set, we will be doing just that, hosting wine tastings and connecting with folks around the world to help us in our fight. As we get closer I will be sharing lots of additional information about the American Cancer Society, it’s events, mission and how you can get involved. 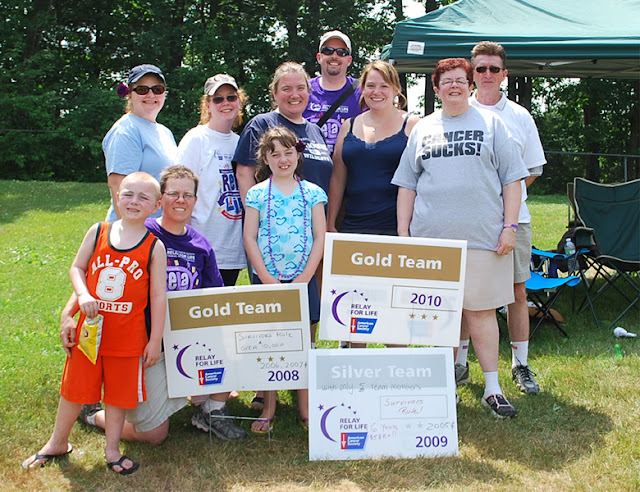 ( Last year's Relay team right before closing. Proud aren't we!! )
Our team is back for Relay again this year and our online fundraising site is up and running. If you would like to donate to get us going for another fantastic year you can use the link below. The donations go directly to the American Cancer Society as we raise funds in advance of our event in June. Thank you so much for you support.

A few years into our activities I coined a battle cry for my team. I use it all the time to remind people just what it is that we are doing. I’ll close with that today.

“We are here, we are fighting, and we will win! WE MUST HAVE HOPE.”

Congratulations to you for every accomplishment. Your mission is clear, continued success in every phase of your journey.

You are an inspiration!
Joanne

lovely way to help for a good cause Congratulations

Good for you! I think this post was inspiring and wonderful.

Congratulations on being a testicular cancer survivor and all of your accomplishments in fundraising and efforts in raising cancer awareness. Maybe someday we can hit you up to produce a home brew for the Testicular Cancer Society.

Congrats and cheers to a new year and breaking all prior fundraising records!

Congratulations on being a cancer survivor and bravo to you for giving back! Thank you for sharing this with us...very inspiring!

Thanks everyone. This has become a passion and I look forward to each new year for the new friends, new events and new heights!

Nicely done, Jason! You are amazing!!