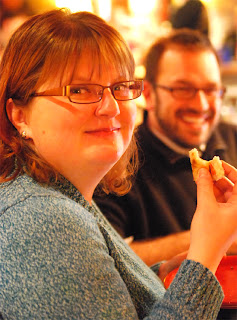 I'm back! Margot here with a pizza review.

We have all heard the saying “When pizza is good it is really good. When it is bad it is still pretty good.” I definitely prescribed to this motto back in the college days. Because after 1am anything tasted good! Now I like to think that I have a more discerning (and sober) palette when it comes to this food favorite. This is not to mean that I have become a pizza snob, or pizza purist. I am not a zealot about any particular type being better than another (Some famous battles: Deep Dish vs. Thin Crust and in NH Greek vs. Italian). I like all types of pizza and I am always looking for a new slice to try.

This Thursday brought a unique pizza opportunity. Meeting some friends at the Portland Pie Co in Manchester, NH for some Shipyard beer and slices and all for a good cause, the local chapters of Big Brothers Big Sisters. I had heard good things about Portland Pie from some Manchester locals. The location in Manchester is the first one in New Hampshire and it opened its doors in June 2010.

Portland Pie Co started 13 years ago in Portland, Maine as a take out and delivery joint. They added two additional locations in Scarborough and Westbrook before their recent expansion into New Hampshire. Their theme has expanded as well with their new and updated locations offering seating in a pub like atmosphere, with a full bar.

Jason and I were both happy to see they offer a daily rotating variety by the slice. This allowed us to sample three different pizzas (and it let Jay get one more slice of his favorite at the end of the night!). It was not easy to make a selection because all of them looked (and smelled) delicious. We settled on three varieties reviewed below. 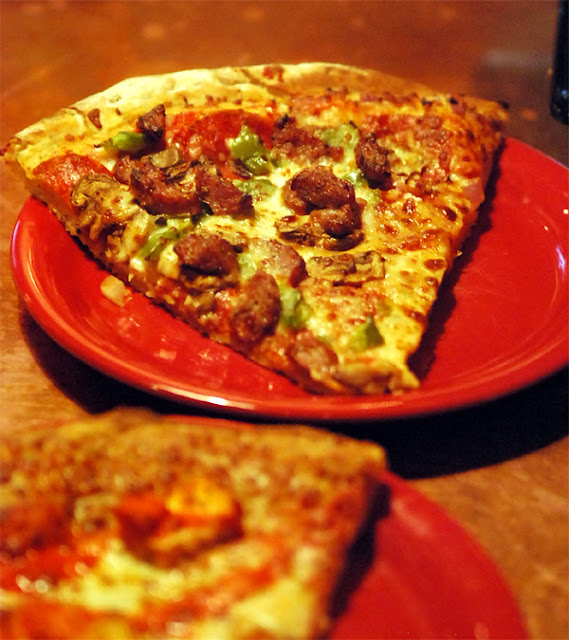 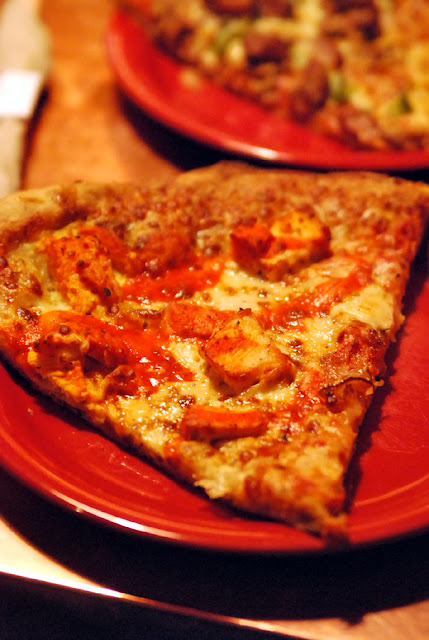 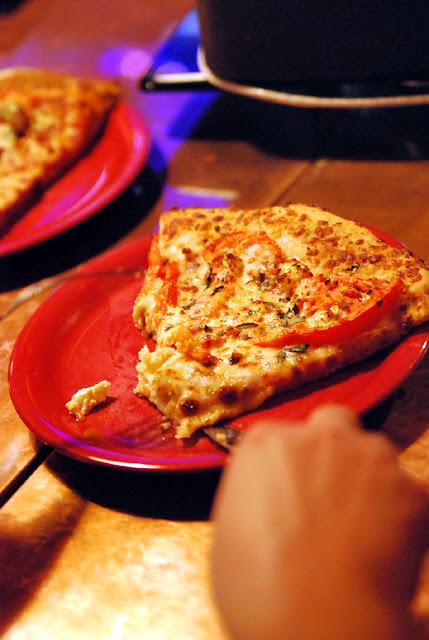 Great Diamond – White Pizza with a base of Fresh Garlic and Olive Oil topped with Vine Ripe Tomatoes, Feta and Three Cheese Blend. It is finished with a sprinkle of fresh basil when taken out of the oven.

Before getting into the review of the individual pizzas let me explain the crust. Surprisingly even though the slices came out of a warmer behind the bar the crust was still perfectly cooked. Not exactly a thin or a thick crust, but somewhere in between. When biting into each slice you got a pleasant crunch on the bottom of the crust followed by a nice chewiness. Even though it was kept under a warmer the crust was not dried out at all. The crust ends were delightfully crunchy on the outside with a chewy soft inside. Portland Pie managed to give the big crust end lover enough to chew on and satisfy, without making the non-end eater feel they were losing out on half a slice. 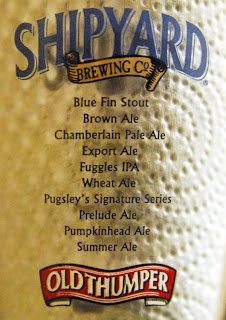 Jason here, to talk about the beer. Shipyard Brewing, also from Portland, ME, was also on hand to support the fundraiser and release the 2011 batch of their Brown Ale at the pub. I talked to Jim Belisle from Shipyard about the history, and the future, of their Brown Ale. A few years ago Shipyard held a contest to pick a brew to release for Spring-time drinking. They recognized that there wasn’t a beer profile for the New England Spring and they should fix that. The Brown Ale was the first winner of the contest and has been brewed seasonally since. In 2011 the Brown Ale was switched from a seasonal beer to an all-year-round beer paving the way for a new Spring beer in 2012. I found the Brown Ale to be on the light end for the style, having a nutty, smoky quality and a noticeable influence of hops, especially towards the end. I also tried the Shipyard Fuggles IPA and Sea Dog Blueberry beers. The Fuggles definitely puts the hops up front with flavors of pine. It is light in intensity with a clean acid finish. The Blueberry was much better than I expected. Fruit beers can be a let down, but this one smelled and tasted like a blueberry muffin! This shouldn’t be a surprise hailing from Maine where blueberries are a seasonal delight. The beer is brewed with real blueberries instead of extract, which makes all the difference. My impression of the beer is of a wheat beer base with generous blueberry influence and just a little hops to cleanup. I didn’t specifically consider the beers with the pizza, but I am going to bet the Fuggles IPA and the Nor’Easter pizza would have made a good match. We both won pint glasses and hats in the raffle. Pretty cool to go home with swag as well as a full stomach!

All three slices had a great balance of toppings. For me good fresh toppings can make the pizza, but they can also overwhelm if heaped on to high. The toppings at Portland pie gave you enough to have some flavor in every bite but still allowed you to taste both the cheese and the crust. The red sauce on the Moosehead had a wonderful fresh tomato flavor and was thankfully not over-seasoned. It appears that they went to some lengths to bring out the tomato flavor rather than bury it. Jay and I both agreed that the sausage had a pronounced fennel flavor, and Jay even thought there was some fennel seed on the pizza. The sweetness of the sausage played well with the slight heat from the pepperoni. The mushrooms and the green pepper were perfectly cooked, and I was quite happy that the peppers still had some crunch. All of these things made the Mooshead my favorite of the three. 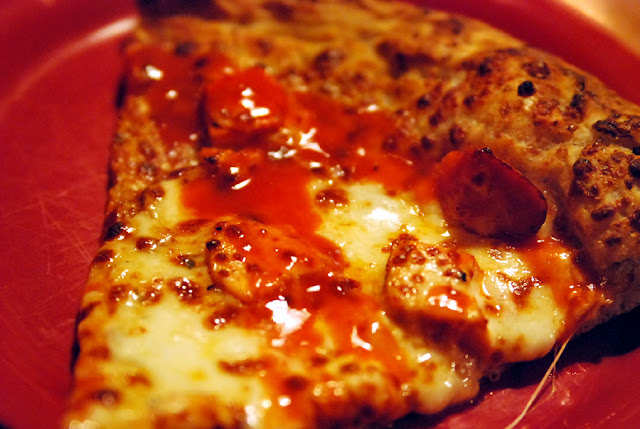 The Noreaster was easily Jay’s favorite causing him to order a second slice at the end of the night. I must note that I am not a person who can tolerate a lot of heat. The Frank’s Red Hot definitely presented a bit of a challenge for me. The chicken was well cooked and they somehow managed to not dry it out in the cooking process or in the warmer. The Three Cheese Blend was excellent, as it was on the Moosehead. Due to the aforementioned lack of heat tolerance I was not able to have too many bites of this slice. The blue cheese was definitely present, but be prepared as it does not do a lot to cut back on the heat.

The Great Diamond is wonderful for anyone who is more of a pizza purest. The tomatoes on this pizza were definitely fresh and of high quality. It was wonderful in the middle of our harsh winter to have a pizza that tasted like a bite of a summer garden. The best way to describe this pizza is clean and fresh. Adding the feta was a wonderful idea and its salty creamy texture made the brightness of the tomatoes and basil pop even more. Like the Moosehead, the balance of the toppings is what made this pizza. There was just enough feta to add some saltiness but not so much that it overwhelmed the more delicate flavors of the tomato and the basil.

I cannot end this post without mentioning the staff. Our group all sat at the bar and the service was excellent and very attentive. The staff was extremely friendly and genuinely gave you a sense that they liked their jobs and took pride in what they did. In a time when some servers act as though you are bothering them this needs to be commended!

Jay and I will be heading to Portland pie again! I would strongly recommend it to anyone that is looking not only for amazing pizza but for a local hangout where you can relax, have a few pints and feel welcome as soon as you walk in the door.

The night's meeting was amongst folks that have been acquainted through the Leadership Greater Manchester program. There were people from last year's class, of which I am one, and several from this year's class. At the end of the night when we went to settle up we found that the rest of the group, including Chris Wellington who was paying the final portion of the bill, had taken care of it. This was surprising and something we thanked all of them immensely for. Hopefully we will get our chance to repay the favor real soon.

So I've added this to the list of places I need to check out on one of these trips back home. Looks yummy! I really like the Sea Dog Blueberry Beer so I was happy it got a shout out. And they have expanded the Sea Dog Brew Pubs into Massachusetts now...one opened up near my office in Woburn and one is opening or already is in Charlestown I believe. And for readers who visit Kennebunkport, Maine you can check out the original home of Shipyard Brewing at Federal Jack's Brew Pub. They also make a line of soda and sometimes the root beer is available on tap. Kind of a fun place!
Jen D.

Not a day goes by without me drooling over pizza posts. Yours is right up there in terms of porniness.

Cant believe only one person commented on this LOL.