A Love Story, and How We Found Ourselves in Provence 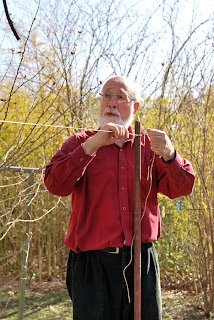 In the late 1990’s I met a friend of Margot’s uncle Gerry named Eloy. Gerry and Eloy both live in the Montreal area and have been friends for over 40 years. Gerry is a priest and Eloy met him as young teacher at the school where Gerry also taught. Eloy escaped Cuba at the age of 18 finding refuge in Canada with help from the order of priests Gerry belongs to. The rest is indeed history, but we have to take a walk through some of that history so you can understand the greatest love story I have ever been witness to.

In the mid-1980’s Gerry and Eloy took a trip to the Holy Land. On that trip Eloy met a woman named Francoise. They came to be fond of each other, but chose a friendship and long distance correspondence instead of something more. Francoise lived in Paris, France and Eloy in Broussard, Quebec. They met several more times on various trips and maintained a long distance friendship all the while. During that same time Eloy became an adopted member of Margot’s family and formed a strong bond with Helene, Margot’s mother. Eloy has always been treated as a family member and is often spoken of as another uncle by Margot and her siblings. I’ve come to know him as a friend in 20+ years, and more recently as a stalwart caregiver to Gerry as he continues to battle aggressive cancer. It is Eloy that drives Gerry back and forth to family holidays in the States, often staying at our home for the celebrations. Not long after Margot’s father passed away Gerry took Helene on her dream of a lifetime trip to France, and ultimately to stay with Francoise who had since moved to Provence. She raved about the place and often told Margot she should plan to get there one day. 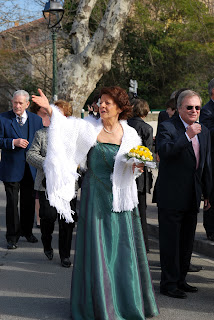 In 2010 Eloy and Francoise met up once again, but something was different this time. Both found themselves securely retired, having large extended families, no children and a vibrant zest for life. When I got an e-mail from Gerry stating quite plainly that Eloy and Francoise (who I did not know or know of at the time) were going to be married in 2011, I certainly was surprised. With the back story in hand I reflected on it as one of the greatest stories and definitely the greatest love story I had ever heard. I couldn’t have been happier for a man who I have watched do so much for others with the kind of selflessness and grace I am immensely envious of. But I would be happier in the details of this story as it unfolded.

About a month after the announcement was made we received an e-mail from Eloy that opened the invitation to attend the wedding to all of his family members, including us. Margot called to relate the news and in a surprise move my response was, “so we are going to go, right? At first all she said was “What!” She was shocked at the ease with I was making such a grand commitment. I am not generally that way. But I had my motivations. Eloy has been a great friend to Margot’s family and was at the center of a story that is likely to become a legend for them. The wedding was also in France, a place neither of us had yet travelled to and very much wanted to. And despite some of the stereotypes about weddings, they generally are an example of the best things this life has to offer. I knew I had to be in on this! 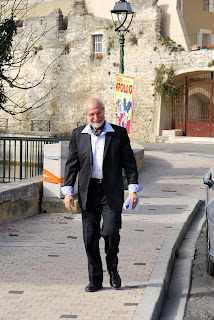 We responded to Eloy that we would indeed be attending and to keep us apprised of the details as they evolved. We soon found that we would be the only family representatives at the wedding. Unfortunately Gerry’s health would not permit the trip and others were not able for various and well understood reasons. Functioning as the family ambassadors made the trip a great honor for us. Joining two families is a big deal, and we would be projecting an image of new family to two others (remember the non-familial relation) at the same time being recipients of the same from both. I was actually nervous.

As the plans evolved the holidays rolled around and once again Gerry and Eloy came to visit for Christmas. But this visit was much more exciting. Francoise would be joining us and would be meeting Margot’s family for the first time! Our visit with them was fantastic. Margot and I got to play hosts in advance of them doing the same for us. We discussed the arrangements for the trip and were overjoyed when a place to stay at Francoise’s home was offered. We set about scheduling flights between Boston and Paris and the train between Paris and Avignon. About two weeks before the trip we confirmed our arrival details and waited with intense anticipation.

As you read in the first post, our trip was smooth but tiring. We arrived on Thursday, with a day and a half to go before the big day. We joined many other family and friends who were staying and/or bustling around making ready for the wedding. We offered to help in any way we could and ultimately helped clean the home for the after wedding social and helped setup the reception hall for the wedding celebration. 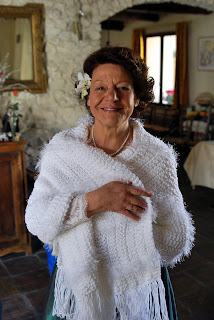 Before we left my mother had shipped us a gift to take Eloy and Francoise. My mother has also found enjoyment spending time with Eloy during many combined family holidays we have had. She knits and made a beautiful white shawl as part of a project with the ladies of her church. The prayer shawls are an example of the love of their church community and have been made for all manner of occasions where the love and support of a friends can feed the human spirit. We presented Francoise and Eloy with the shawl right before the wedding and found timing to be everything. Despite it being a warm, sunny Provencal winter day, Francoise had been concerned that she might get a chill outside but hadn’t determined a remedy. Her words were, “this is just what I needed”, and promptly donned it over her dress and went on about her final preparations. I called my mother a few minutes before the wedding began and I could tell that she was touched by this outcome. Her gift became part of the celebration. What an unexpected twist!

The hour came and we jumped in the car with friends of Francoise’s who shuttled us to the city center of Le Thor where both the civil confirmation and wedding mass would be held.

Up to this point I haven’t mentioned a key detail that provided both a source of frustration (for Margot and I) and a lot of laughs for everyone during our stay. We don’t speak French or Spanish, and both of which were being uttered in considerable quantities during our stay! In an upcoming post about the friends we made during our stay I’ll elaborate on this story a bit more and give a shout out to a few folks who were essential in helping us both learn, but also to communicate efficiently with the dozens of people we ultimately interacted with.

So we drove along with people we had met 3 minutes previously, all mutually unable to efficiently communicate with other. Awesome! It worked out great though. They were even looking for us after the mass to ensure we wouldn’t be left behind. 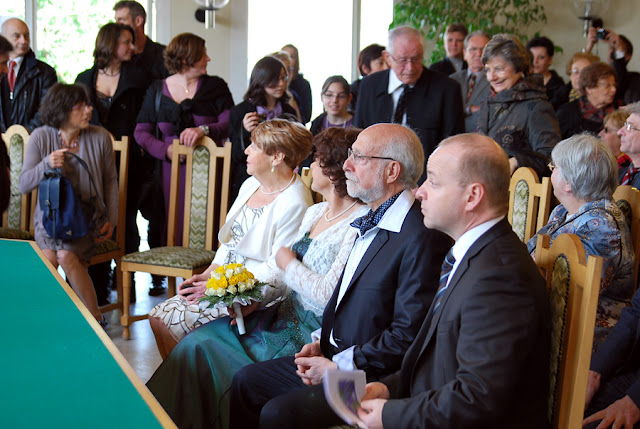 ( The laughing hadn't quite kicked in. )
The civil confirmation of the wedding by the Mayor of Le Thor was both serious and light. There were documents to be signed in between friendly jokes and the compulsory verbal declaration of intentions to be married and uphold that choice for as long as they should be living. Laughter permeated the entire assembly when the customary consideration of providing a loving and safe home for children was reached. Neither the bride nor groom had made that choice when it was most likely, and they with their assembled friends and family couldn’t help but make light of that ship having sailed off long ago. Something tells me this is real living, and only further confirms that the people in this story have remarkable joie de vivre.

The wedding mass was held in a 13th century cathedral with an assemblage of 7 priests comprised of both parish clergy and friends from France and abroad. It was a beautiful ceremony with joyful singing and recitation of readings and wedding prayers in multiple languages. Later we received an e-mail from Gerry indicating he celebrated mass at his parish back in Montreal at 9:30 AM so he could be joined in mass with his family 6 hours ahead in France. 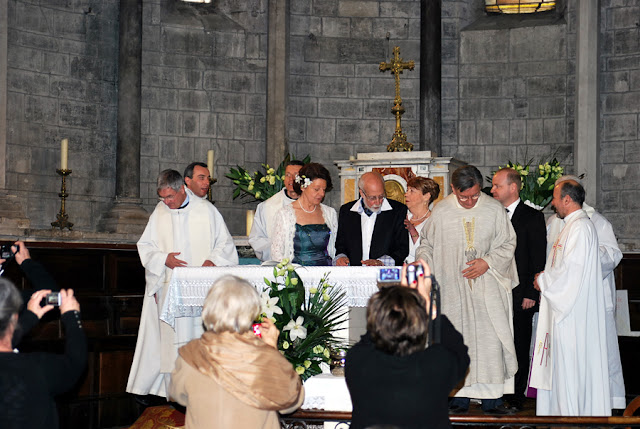 ( That is a quite group to officiate a wedding! ) 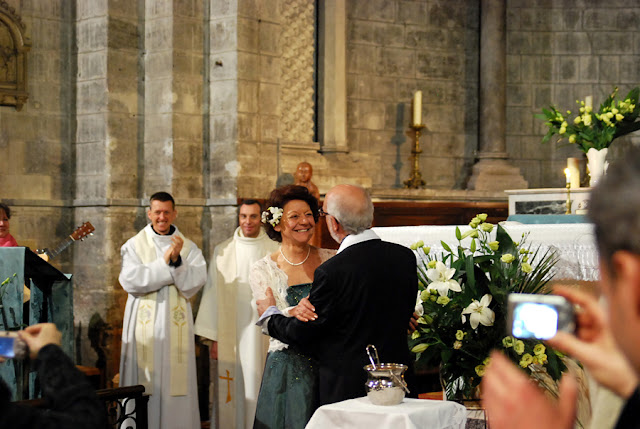 ( How could we have missed this? ) 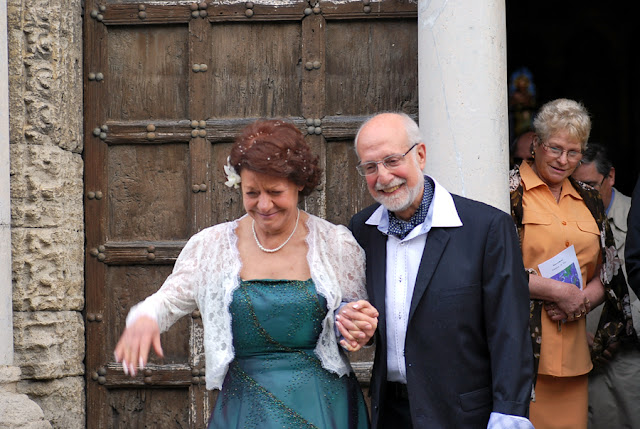 ( The kids peppered the happy couple with rice with joyful adandon! )
A contingent of nearly 200 people returned to Francoise’s home for a celebratory social with champagne, wine, food and lots of laughter. Two of Gerry’s friends got together with us for a picture to send along so Gerry could enjoy the event through us. 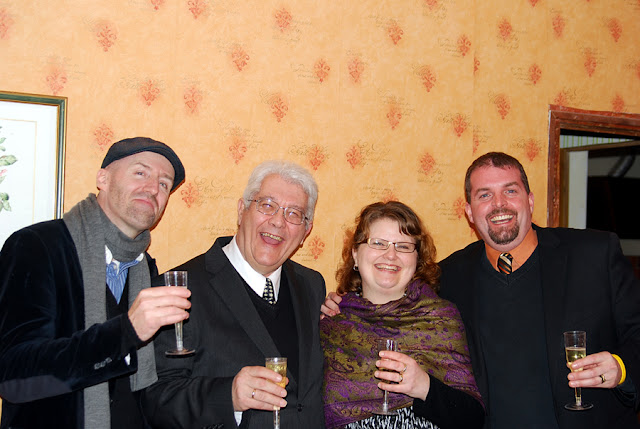 ( Marc, Yvon, Margot, Me )
The wedding reception was held at a hall a few towns over and was quite similar to many we have been to before. Francoise and Eloy thanked their family and friends for making the trip including special thanks to those who had travelled quite a distance to enjoy their special day. We felt so special. 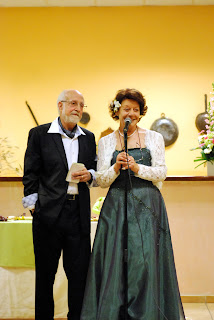 ( To Eloy & Francoise! )
The food was excellent, the people were fun and when we got to the skits and singing we were once again able to see how the family was celebrating this wonderful event. There was dancing to a wide array of French and American music (50/60’s classics are big there) and lots of toasting. When Tom Jones Sex Bomb came on Margot and I had to laugh. The mix of folks grooving on the dance floor to this particular song is a vision that will make us laugh for years to come! 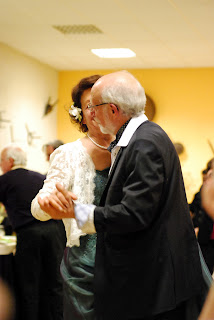 ( You can just feel the happiness and joy. ) 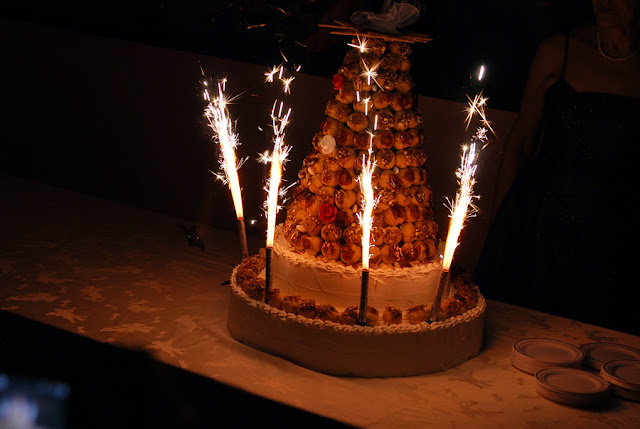 ( Fireworks are a great touch at a wedding reception. )
This story is early in its telling and I for one can’t wait to see more of it unfold.

Jason
Posted by Jason Phelps at 7:24 AM

Lovely! What a beautiful story and beautiful photos, and genuine happiness on everyone's faces!

The wonderful story continues. You are so lucky to have been able to participate in this great celebration and love story.

Ah - the love story behind the trip! They look sooooooooo happy. May everyone always have such smiles!