Our Family Meals in Provence 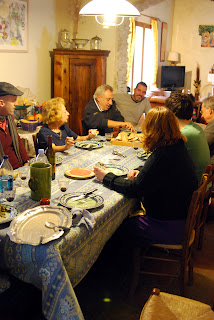 This past week has been filled with new and exciting experiences for Margot and me. Late last year we accepted an invitation to a wedding that would be held in Le Thor, France. It was with great affection and honor that we made our plans to travel to Europe for the very first time. The love story behind the people and the wedding will be featured in my next post.

We arrived in France early Thursday morning after what was briefly our longest direct flight ever (the flight home is longer), weary from our travels. The flight on Air France was most certainly a much improved air travel experience than our domestic carriers offer. With good-tasting hot food, wine and free entertainment on-board our flight was that much less uncomfortable. But I digress.

Our hosts live in Le Thor which is east of Avignon where we would travel to next by train. The TGV (high-speed train) is most certainly an excitement in itself. You have no idea just how fast you are going as you zip through the French countryside. The view is best from the upper cabin and alternates between farmland, vineyards, small towns, cities and the mountains in the distance.

Arriving just before noon we were promptly greeted by Eloy and Francoise, who were so happy to see us after their short visit with us at Christmas. We were whisked off to our vacation home for the week and to the very beginnings of the large group of family and friends we would be sharing our meals and social time with during our stay. 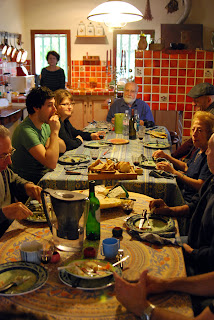 A couple notes for those that might be confused as they read my trip posts. We didn’t eat any restaurant meals and had limited involvement in preparing what we did eat. I also didn’t take a lot of food pictures. Both the size of and our unfamiliarity with the group of people just didn’t support it. The hospitality provided to us was beyond our expectations and with nearly 40 people to feed on one of the nights, preparations were going on behind the scenes, at other locations and while we were out of the house. I could say I was disappointed, but then again I did get to be on vacation! What I have to share are my impressions of what we ate, but more importantly of the community at the center of these family meals in Provence. I am going to break out a separate post on the wines I tasted while I was there.

Arriving just in time for lunch we made quick work of introductions while we set the table for our group of 11. Francoise had spent the morning preparing roast pork covered in an earthy mushroom sauce. And green beans. A couple things that you must quickly acclimate to in Provence (and I would imagine more broadly in France as well) are that bread is on the table at every meal and wine is available at both lunch and dinner. I would imagine folks that have to go back to work don’t over indulge, but when on vacation there is room for enjoyment! While there were plenty of remarks made about the food from those who were experiencing the local cuisine for the first time, the conversation centered around the occasion, where folks were from and the plans we would make to visit local sights.

If you have never experienced the famous cheese course after typical French meal you would have been in luck this past week. A tray full of cheese appeared after each lunch and all but the largest dinner gatherings. The eighty guests at the wedding were also lucky enough to indulge in their love of cheese! Goat cheese, blue cheese, Brie, Camembert, many different unnamed hard cheese and several styles of young soft cow’s milk cheeses all made appearances in different combinations. Oh, and more bread with the cheese course! I am a sucker for cheese so this ritual went a long way in securing plans to be back real soon.

Breakfast was the same each day, and at least in Provence is without much fanfare. That really isn’t a problem based on the other stuff we ended up eating the rest of day. Bread, butter, homemade jams and cereal were all available with milk, juice and coffee. A jar of Nutella appeared on the second morning and when paired with a hearty slice of Brioche, Margot found a winning breakfast.

For our first dinner we enjoyed Raclette, a Swiss tradition of melted cheese, potatoes, pickles and cured meats. We did use a modern Racelette grill (several actually) with individual melting dishes for each person. God, I love European sensibilities!

I was lucky enough to catch Francoise making Aioli that was to be paired up with steamed fish and veggies for lunch on the second day. She used the word reporter when I started taking pictures. That is pretty accurate in the broad sense I guess. 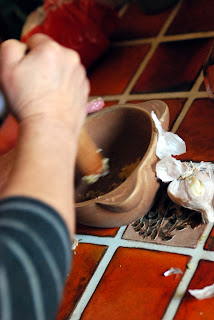 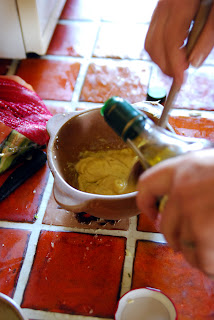 ( Adding the olive oil to the garlic and dijon mustard. ) 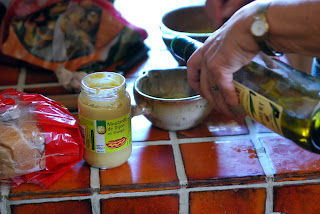 ( Looking for just the right balance. The hard part! ) 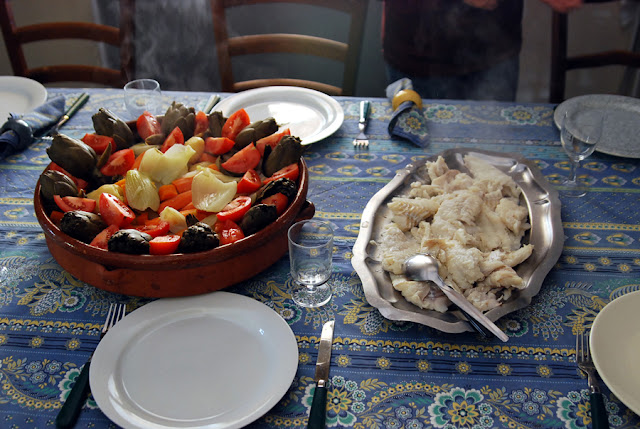 ( So simple, but so delicious! )
The food on Saturday (the day of the wedding) came in waves. Lunch, the wedding social and finally the wedding reception. Margot and I were looking forward to tapenade and weren’t at all disappointed when it appeared during the wedding social. There was also a savory cake that contained cheese, olives and ham that disappeared in record time. There were all sorts of appetizers, rice and pasta salads, zucchini tarts and probably some things we enjoyed but have already forgotten. 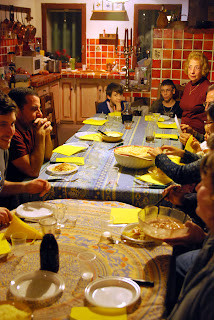 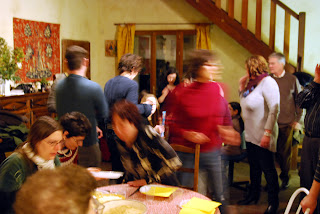 ( Marie-Claude was not really moving that fast, but she sure looked like it all week! ) 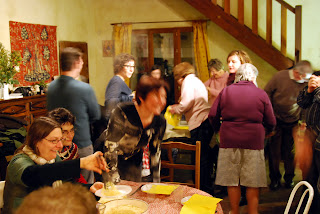 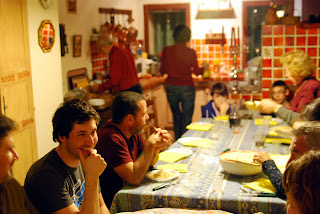 ( Smiles say it all! )
The wedding reception offered up a wonderful mix of foods. The first course included foie gras, an eggplant tourine and a fish tourine, the latter not being something I could eat more than one bite of.

The second course included a wonderfully marinated and gently cooked duck breast with an eggplant salad that contained onions, olives and capers; a Provencal classic. There was of course cheese and bread to follow the main course. There was wedding cake for dessert, but no ordinary wedding cake, rather a croquembouche! A croquembouche is a cone of caramelized sugar decorated with cream puffs. It was amazingly beautiful and so delicious. 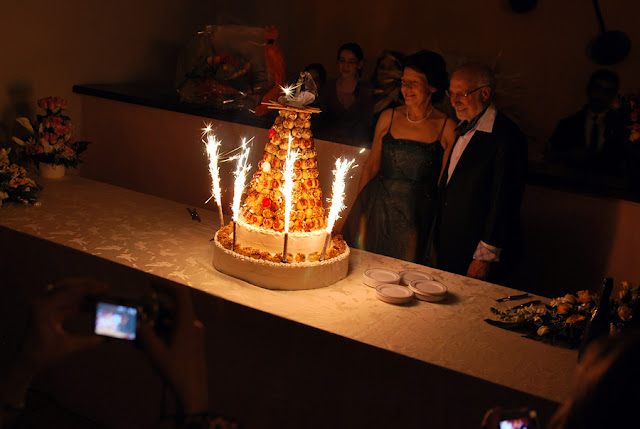 ( Was your wedding cake that cool? Mine wasn't! )
The remainder of the weekend’s meals were based around eating different combinations of leftovers from the days before with, wait for it, bread, cheese and wine. It never got tired and I am not quite sure where all the food was hiding!

And with all of those meals was the communion of a cast of characters that were coming together as family. You might have heard Annabella (Jose & Carla’s daughter) playing to the audience with here cute quips or Margot telling a family story or Marc talking about an adventure somewhere in the world, but one thing was quite obvious. The food brought the people together and gave us the time to get to know each other. As a food blogger I found this story to be a true joy to be part of.

What an EXCITING and great trip! My husband and I went to Europe for our honeymoon and rode a bunch of trains, one being the TGV - it was fantastic. I bet the food, wine and country side were all amazing. Thank you for sharing your wonderful adventure!

Jason, thanks for sharing your adventure with us! I'm glad you took a bit of time off from photo taking to enjoy the moment... I know for myself I need to put the camera down on occasion and actually participate. Lovely descriptions of your meals and treats along the way.
My husband and I visited Tahiti many, many years ago when we were a bit low on $$ and had no idea how expensive the food was. We lived for a week on bread, cheese and wine! It was everywhere, it was excellent and it was cheap. Best food ever!

So beautiful. The place, the people, the time, the food. The wedding couple is gorgeous. You writing leaves me with a certain aaaahh. Now that you have been to Provence, you'll have to tell me if I'm dreaming when I say that I think our place must be something like it. Looking forward to your visit in autumn!

What a fabulous trip and like Kim, I am pleased you took the time to live in the moment and not behind the camera - it's important to step back from that from time to time. Sounds like you had am amazing trip with good food and good friends - what more can one want?

How wonderful to go on this trip!! Eating homemade is the real experience - very fortunate. That cake is wonderful - blessings to the couple!

What a wonderful trip. To be included in a local family celebration is such an honor. You really get to experience authentic culture that you might not get on a regular vacation.