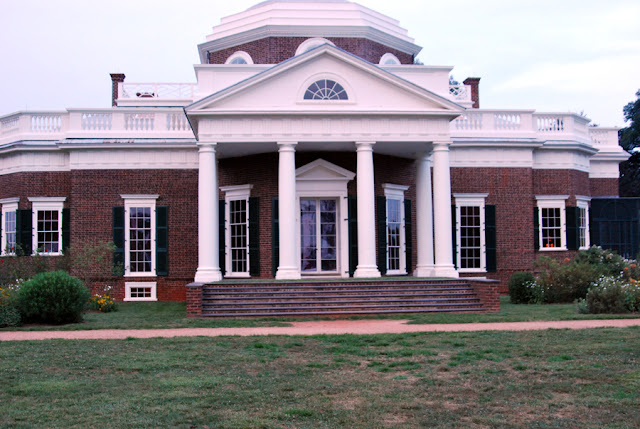 The 2011 installment of the North American Wine Bloggers Conference (#WBC11) was held in Charlottesville, Virginia this past weekend. There are so many ways to describe the experience, some I can relate to, and some I can’t. Whatever any particular person did experience the following things were at least the general expectations from the event in the lead up to it:
So how do I think it measured up? Pretty well I’d say. I’ve been to conferences on non-wine topics before and across the boards they all bear similarities making general comparisons and conclusions fair. 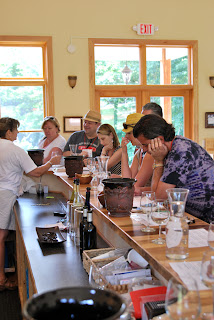 I did get to sample Virginia wines. I likely could have sampled more, but other conference attendees might suggest that I did my share and anything more might have been a risk! I did also sample wines poured by sponsors, non-Virginia participants in the speed tastings and the kind folks from Ohio, Missouri, Texas, Indiana and Maryland who brought examples of their states’ wines to share.
The Virginia wines were new to me so I can’t comment on progress made in the region over time. Having now sampled a nice cross section of them and been able tohear from some of the winemakers I certainly can saw a few things of note.
The picture to the right is of the first tasting group at our Ducard Vineyards visit. The tasting room is decorated in reclaimed wood and evokes images of the tasting rooms I am used to in NH & VT.
I heard it several times, Virginia does not have an ideal climate for grape growing but it offers a slice of opportunity and has some more optimal regions. As a result the grape growers and winemakers are working hard to manage where they find themselves. I hope hard work continues to pay off, and I look forward to going back in time and observing how the region has grown. 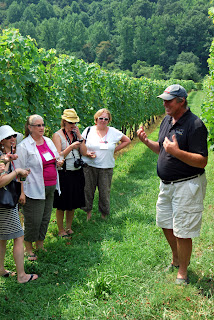 For whites I tasted Viognier, Chardonnay, Vermentino, Vidal and several white blends. For reds there were plenty of Carbernet Franc, Petit Verdot, Merlot, Nebbiolo and Meritage or other style red blends.
In only a few cases did I find anything I would classify as a flaw so my overall impression was that there are lots of wineries producing well made wines in Virginia. I’ve already written an article on my observations of the two emerging styles of Virginia Viognier and I also have plans for a post specifically considering the reds and I why I think the blends are the key to future success in the state.
The the left is Scott Elliff from Ducard Vineyards talking about the challenges of grape growing in Virginia and his approach to vine management.
I had plenty of opportunity to interact with others while on the ground in VA, but there is no way it was ever going to be enough for someone who could potentially meet each and every participant as a new connection. I did as much as I could do, and the connections I did make are the highlight of my attendance and something I will be able to use to share and learn. 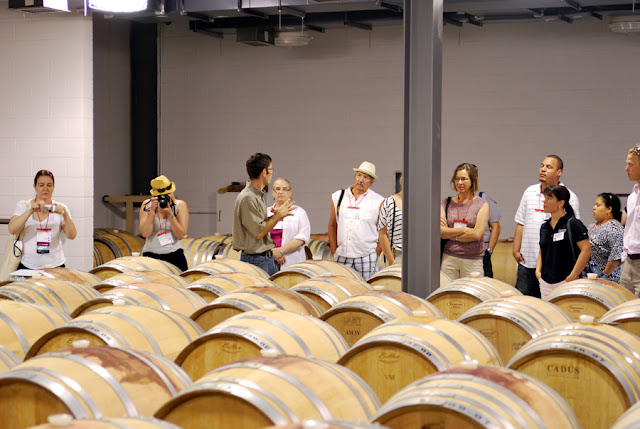 ( Frantz Ventre, winemaker at Sweely, talking about their aging process. )
The session schedule for the conference was interesting and lighter in focused and impactful content than I am used to from the annual WineMaker Magazine conference. That said, there was enough to make something valuable of it. I will be making suggestions for next year and potentially show interest in moderating and/or presenting.
The best session for me was the one kicking around the Drink Local topic. The panel and the audience had a vibrant conversation about what it means to drink local, why it doesn’t happen as much as it could and what could be done about improving this. You can read my post session notes in Drink Local Wine. This is a conversation that needs to continue and spark action in regions all over the country. I for one am already working connections with New England bloggers I met to see if we can’t start thinking and acting more like the folks we met from Virginia!
A notable session was the Aromas of Wine with Winebow breakout. The reason it was notable for me is that is represents a concept I have yet to act on with my friends at home. Using your sense of smell to create solid sensory memories of fruits & vegetables whose aromas are typically found in wine.  We were presented with a tray with small cups of different aromatic food items and given the opportunity to profile 6 wines (blind, 3 red & 3 white) and relate them to the aromas from the food items. Sheri Sauter Morano, MW was our guide and she was both informative and engaging. I am hoping to get my hands on her presentation as motivation to recreate this at home for friends. The tray of aromas can be found in the picture below. Pretty neat! 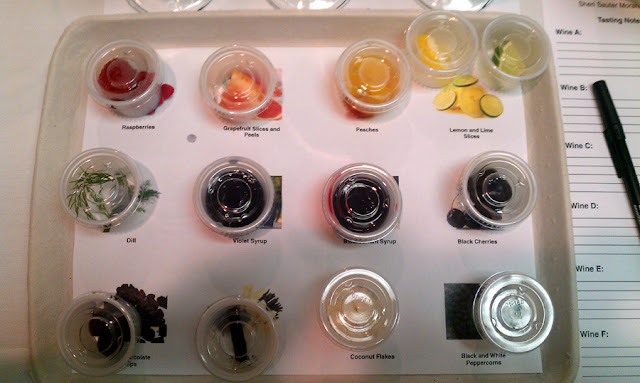 The keynote addresses were not a huge highlight for me. I was and am more interested in being inspired by what other people like me were doing in their own wine-focused lives. I am not particularly prone to idolatry and from the amount of tweets and posts using both of the presenters names I take it that a lot of people are, and are also using the name recognition to turn eyeballs their way. I actually has to ask who Eric Asimov was. That will tell you that I obviously focus elsewhere. Both Jancis Robinson & Eric Asimov did offer some useful tips but stayed in a safe and pretty obvious space with their thoughts. Two of the themes were to be original and to do your research, and I found that neither to be harnessed well by either. Eric’s word were a better fit for the audience, but could have been even more focused with some additional research into the group and its interests. Jancis seemed to flit from one topic to another and I couldn’t quite grasp what she was getting at. Take it for what you will. 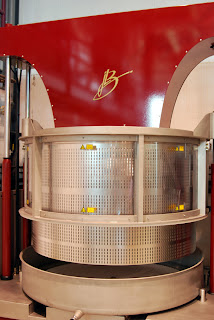 The Wine Blog Awards ended up being a bust for me (for a lot of folks based on my reading of other posts) and is something that could easily be scrapped or completely re-jiggered for some actual benefit. Nothing about the judging process, criteria or what the merits of the winners were was shared. Useless! My very focused suggestion here is that the awards should be based on actual participation in the conference (you have to come and get involved) and be judged and voted on by attendees while we are there. This would be a huge incentive for folks to network with each other and learn what was really out there for wine blogs so the hidden gems and the folks with personality and interesting thoughts might see some recognition. It could be aggressive to do, but we are some of the most technologically savvy, fast moving people in the world so suck it up and figure it out I say!
The picture to the left is the massive grape press at Sweely Estate Winery. I could do some damage with that!
When I got home I collected my action items from all the inspiration I gathered from the weekend and posted them asking for my new community to hold me to it. I want to be a better wine blogger, you are all part of it and I’ll be damned if I’m not going to make what I learned stick. Check out what wrote in Taking Action with What I Learned From #WBC11.
I’ll bring this to a close on the high note that many of use shared. We partied at night. No, seriously, we did. And many of my best conversations were over the glasses of wine that were being consumed and not dumped. Nothing like a little juice to get the juices flowing! Wine is about people and when the day was done the strongest ties amongst the people that I met were because we had no other place to be and no better wine to drink. We dug in to what was in front of us and let it take us where it would. There is no finer testament to the conference being a success than that! 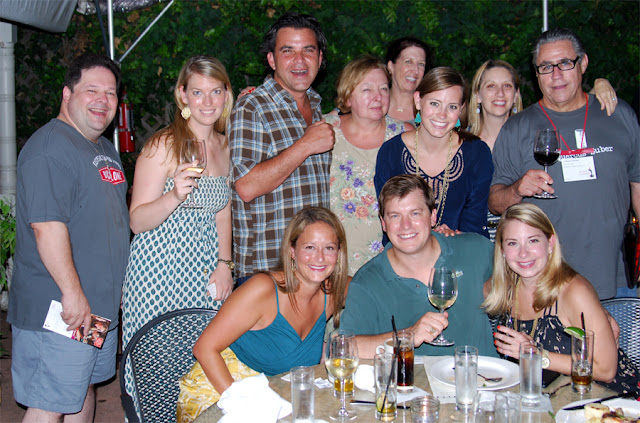 ( Some of the crew I mixed it up with. Hanging with locals who asked us if we were wine bloggers! )
Cheers!
Jason
Posted by Jason Phelps at 9:53 AM

Jason - Great to meet you, and I think you really nailed it: red blends are some of the most successful wines we have, and I think moving forward they will be the rock stars.

I'm also glad that I'm not the only one who didn't react "oh holy **** it's Eric Asimov!" Maybe it makes me a bad blogger, but I don't follow the big national/international voices because they don't discuss what I drink.

Hey Jason- Charlottesville Visitor's Bureau here; glad to see you had a good time in Charlottesville, and thanks for the comments on Virginia Viognier! Next time you're coming to town, feel free to make use of our website to find hotels, restaurants, and of course, wineries and breweries.