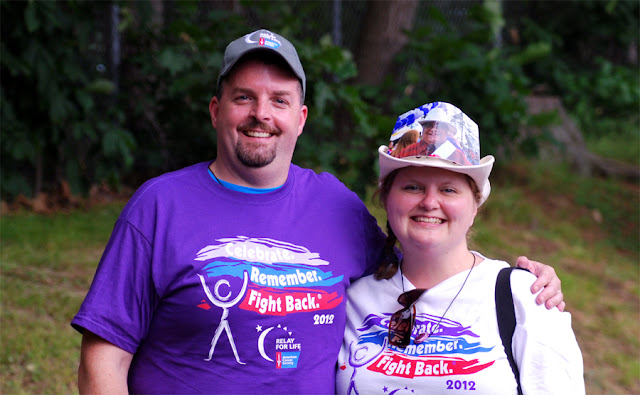 ( Thank you from Margot and I for all the support. We didn't do this, WE all did! )

I owe a lot of people thanks after my Relay For Life this weekend. And those of you who are receiving them, you know who you are, you are just going to have to sit back and take what is coming to you. I am nowhere near as awesome as the honors I have recently accepted might suggest, and I am certainly not even notable without acknowledging all the people who have helped me achieve them. This was always a team effort anyway.

The most urgent thanks go to my team members. Margot, Donna, Missi, Melissa, Jen, Derek, Shirley, Scott, Linda and Kathy, you guys rock. Past team members Bob, Tim, Abby, Alice, Celeste, Amy, Betsy, Ashley, Emillie, Geoff, Kevin, Caryn, Sam, Cyndi and Terri, this is for you as well. Family members of all of my teammates, thank you so much for allowing your loved ones to spend this time; it is worth more than you know. We all did this and we should be so proud of what our efforts have amounted to. 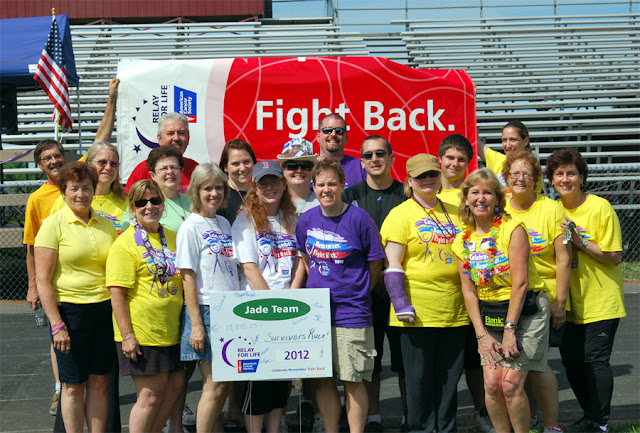 Team Survivors Rule! finished with its best year ever in terms of fundraising AND with an overall sense of joy with what we had done and the apparent example we have set. 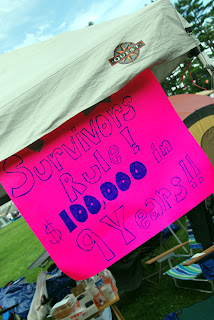 The big milestone looming in 2012 was when we would reach the $100,000 mark. We started this mission in 2003 and with less than ten years behind us, we’ve done it. We knew we did it on Friday afternoon. There were happy dances and high fives all around. We are going to get a banner that says “The Next $100,000 Will Be Easier” to symbolize the sweat that went into putting that mark on the world.

Taking the field (of battle if you will) we then had eyes on the $13,000 yearly goal we had set back in February. Could we hit that? Yes, yes we could. With final campaigning to people at Relay and beyond we eclipsed that mark in the early AM hours Saturday. Wow, the team-work and drive right to end was overwhelming!

I finished with a personal best, and my first year above $3000. To all my individual donors past and present, thank you so much for placing you hard earned dollars with me and the American Cancer Society. Those dollars are a direct pipeline to programs, services and research that is an “all-in” bet on hope. You are my hero and we are all heroes to so many people who will be helped by our efforts. 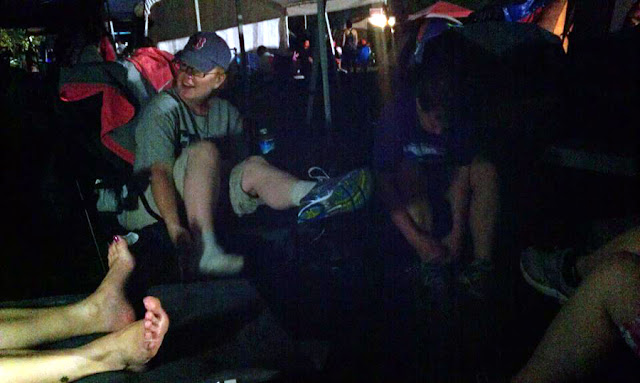 ( Rituals like team sock and shoe changes at 1AM really bring people together! )

The weather at Relay was reasonable, we did have a T-Storm around 9pm, and the team put many miles in on the way to our 10am finish. Several of us eclipsed marathon distance (26.2) miles again, personally having done this (and then some) eight years running.  Five of us banded together to run a final lap as a more potent example that we are here and fighting. Man was I tired! A few small blisters and a gentle reminder to drop a few pounds were the only lasting scars. 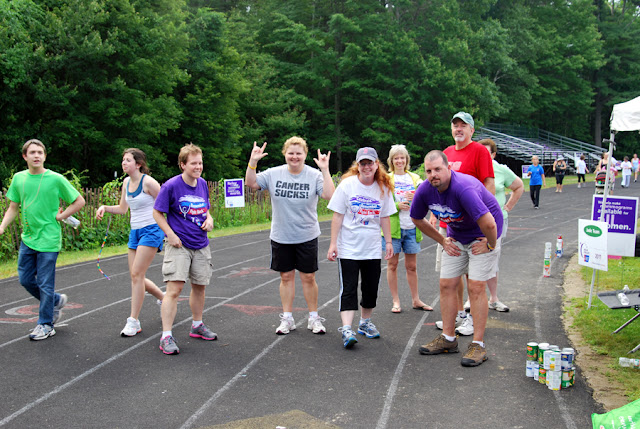 ( A few crazy team members before running a final lap! ) 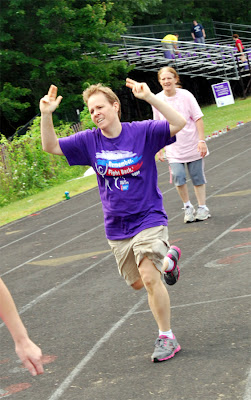 ( Which Jen brought home with lots of track in front the rest of us! ) 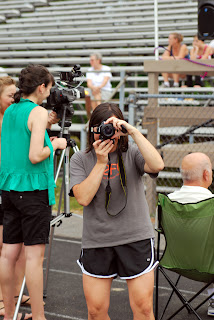 At the closing we clocked in at second place in both the team and the individual fundraising competitions. We’ve had firsts in both in the past, but this year there was another team that was hungry for the top spots and did the work needed to make it happen. Team Golden Brook and captain BJ Martin (in the pic on the right), you guys showed us all how it’s done!

At this point I was very much looking forward to heading home, showering and hitting the rack for a bit. I took a two our nap during Relay after realizing I was stumbling a bit on the track, but even so I was confident that nothing was going to feel as good as bed right about then. Or so I thought.

Special awards are also announced during the closing. I don’t generally consider my team in the running for these, the time commitment to be at all the meetings and network with so many fellow participants is challenging on my and my teammates’ schedules. Well maybe that’s not the whole story. Team Survivors Rule! was honored with the BJ Allgaier Spirit Award for 2012. This award is given to a team that exemplifies the spirit of Relay by setting a positive example, helping others and being an active part of the Relay community. 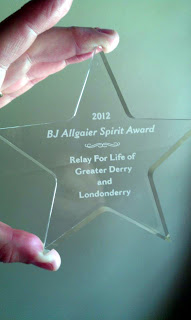 I was asked to speak on behalf of the team and I could barely get the words out. I spoke about how coming to the Derry/Londonderry Relay was an accident, we changed locations due to a family wedding in year two, and that we never left because the community we found was so supportive of doing incredible things. I also said that we are an example of what is possible and that everyone should feel like they could be us, and better yet we would help! I thanked everyone assembled for what they had helped us do.

The award is profound for me. BJ Allgaier was a mentor to me early in my Relay volunteer experience. She helped me, challenged me and asked me what I was prepared to do for my world. Cancer took her from us before she had finished her work. I am so much better off for having known her. To win an award named for her and her spirit is a unique joy.

So thank you to everyone who has donated, walked, hosted events, helped setup and/or cheered us on since 2003. We set out to make a difference and by all accounts we have succeeded in defining a role for ourselves in that. No one of us on the team does even our own little part alone. We all have support. Thank you all so much.