I'm going to end the year with the type of post that was the genesis for this blog, a cellar update. I shared a year in review, the Top 10 Ancient Fire Moments of 2012, last week and while that highlighted all types of adventures Ancient Fire, what's bubbling away or aging in the cellar is the passion and the heart of what I am all about.

There is definitely lots going on at Ancient Fire these days. I'm going review the home fermentation projects of just the last few months and also share hints at where we will be going in 2013. 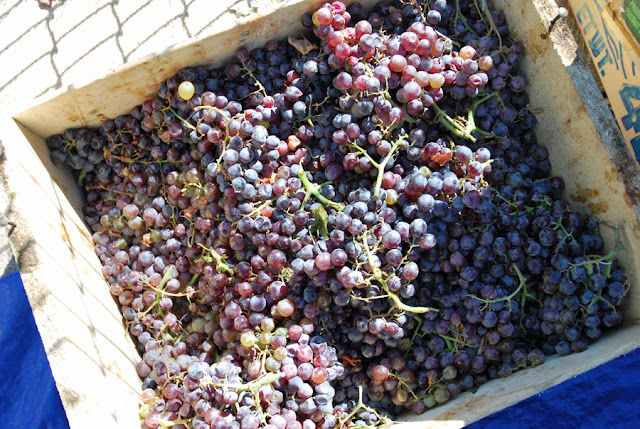 The Fall harvest netted two batches of local Concord grapes, Vermont blackberries and juice/grapes from the Central Valley in California. Several different fermentations were undertaken including my first pyment (grape/honey wine), a blend of French Colombard juice, Muscat grapes and orange blossom honey. The Concord grapes will be made into two Rosés, a red pyment and the leftovers were already made into a spiced holiday wine similar to a Swedish Glogg or German Gluewhein. I also fermented the remainder of my wildflower honey for use in meads, some of which will be infused with tea and other spices. A Syrah/Grenache (CA) blend will hopefully produce a straightforward dry red wine that I can enjoy with a range of foods in a year’s time. The remainder of the Colombard and Thompson seedless grapes were used to make a white blend that will be our house wine in 2013. The Central Valley Cabernet Franc is going to be used in both a red pyment with the remainder bottled on its own. 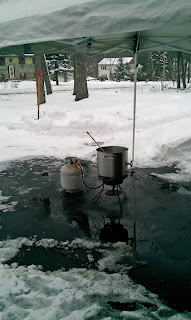 We didn’t brew any beer again after the Stout/Porter experiments and my fresh hopped ale at the end of the summer, but we have plenty of plans for new brews in 2013.

Two days ago I brewed two barleywines, my first ever, both of which should be in prime drinking form for Fall/Winter 2013. I brewed in the snow as you can see from the picture to the left. I'm the Postal Service of brewing I guess. These are big beers (lots of malt) and the blow-off tubes are already outgassing like mad.

In 2012 I already have plans for a Scotch Ale, an Imperial Pilsen style ale, a Belgian Dubbel, a Belgian Wit and a Weizenbock. I would also expect a new edition of our Lime Ale to be made just before the summer party season kicks in. Two braggots are also on the docket, one a Belgian/Saison style and the other with some form of black or dark brown ale as the base.

The most recent cellar enhancement project at  Ancient Fire was the installation of wine racks to store the growing cellar of commercial wines. The short video below captures the current inventory and shows off the new storage space.

All of the carboys (containers in the pool) are the conclusion of the 2012 production, including all of the libations described above. My cellar is more organized now which makes "shopping" in the basement all the more fun!

The only wine I plan to make in 2013 is strawberry, and only if the local crop is worthy. This decision is based on a couple of factors. First, I've got lots of wine inventory, both commercial and homemade to drink, and I'm saving my resources for a new special project late in the year. 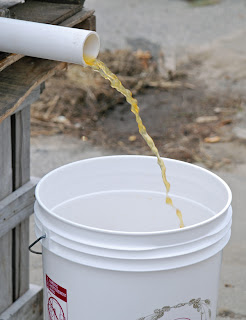 Ancient Fire cider is going to make a big comeback in 2013. I've made cider in five different years, but it has been a while (2009) since I made one I was happy with. The 2012 cider that was a blend of local sweet cider, pears and ginger smells like a chemical lab and is likely going to be dumped. I can't say what went wrong there, but I plan to get back on track with cider when the season comes around again next year. The picture to the right is fresh cider flowing out of a tote that my brewing club purchased in 2011. I made a couple decent ciders from it.

The rough vision is to source cider from several orchards including both dessert blends and traditional cider styles. Leading up to cider season I also hope to acquire several once-used whiskey barrels that will be used to age some of the cider. And don't be surprised if a cyser (apple/honey blend) also makes an appearance. Other ideas include a second attempt at an apple/pear blend, hopped cider and fruit/ apple blends. Definitely lots to look forward to!

In the meantime I've got lots of blending and bottling to do which why I've been furiously cleaning bottles this past week. The stack of bottles in my garage was the largest it had ever been, but thankfully it has almost been converted from dirty to clean or recycled bottles.  I've developed a special relationship with my dishwasher this week, let's hope it doesn't get tired of my willful (mis-) use of it and walk out on me!

Happy New Year to all. I hope everyone finds a delicious beverage in their glass tonight. Raise that glass high and make a joyful sound. We've earned it! Be safe and see you in 2013.

Jason
Posted by Jason Phelps at 7:00 AM