My Half Full Glass - Christmas Edition

Wine free shipping when you buy a case or more.


I'm sharing a special edition of My Half Full Glass this week. There was a fair bit of drinking at my house over the Christmas holiday. But I didn't do the majority of it. I know that is what some of you were thinking.

By the time the day after Christmas came we had entertained at least forty people, and they all enjoyed something different. When I overheard guests talking up something from the bar I made a point to take a taste it and find out what the buzz was all about.

I put together a whiskey bar for the first day of our holiday open house. It was a smash hit! I selected several Bourbons, two Scotches, a Canadian, an Irish and a Rye whiskey as base liquors. Next to those bottles I placed sweet vermouth, simple syrup, Drambuie, ginger ale, bitter and garnish.

Above the bar I listed the recipes for popular whiskey cocktails, specifically the Manhattan, Sazerac, Old Fashioned, Rob Roy and Rusty Nail. As guests arrived I let them know to serve themselves. I had expected it to be a fun way to make the bar work during a busy party, and I was right. Other than refilling the ice I never had to make the drinks or help guests navigate the bar. I wholeheartedly suggest this trick for your next party. I repeated the same format with gin the next day, but with a smaller crowd I didn't see as much activity. The only regret is that I didn't take any pictures of either bar. I guess you had to be there!

The opportunity to try the recently released Moonlight Meadery Summer Love side by side with my own version (a new attempt using the recipe that Moonlight also riffed on) came during our Christmas celebrations. I didn't taste them blind so the feedback can be assumed to contain some bias. To be fair I don't care which one people like more, both are a source of pride for me and when someone smiles drinking one of them, I win!

The overwhelming feedback focused on two key differences between these meads. The first is that the Moonlight version is a bit spicier and that bite came across as a sharp edge to some. Having used Tupelo honey, and not Orange Blossom as I did, an element of spiciness is to be expected.

The second difference, and the one that got the most attention, is that my version was perceived to be creamier and smoother. I again recognize this difference, but in this case don't know why and furthermore how I might reproduce it in another iteration. Food for thought.

Everyone who tried both meads found the experience interesting. For my friends who have been with me along this nearly ten year journey the existence of a commercial product that I had influence on is not a surprise, although it feels like a long time coming for my most faithful fans.

One of the Ancient Fire Top 10 Moments of 2012 was riffing on Bud Light Lime after finding refuge with one on the Kid Rock Cruise. This beer has officially exceeded any expectations I would ever have for homebrew. With just enough of a sour kick, this beer brings so much to tickle the palate. 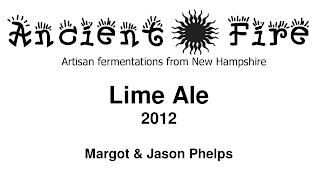 The base beer is a very simple wheat ale, and is ridiculously easy to make. I make can two of them in just over 3 hours. This is a great summer beer and will likely pop up on the late spring brewing schedule for just that season of enjoyment. Keep an eye for summer party invites, especially if I mention the lime ale.

My niece Ashley gets a mention this week. She loves my homemade wine. She specifically likes my fruit wines and this is huge for me, because I always hope they come so good that smiles are assured. These wines tend to be the freshest and most interesting wines I make primarily because the fruit is fresh and the composition is more elaborate than a typical grape wine. Ashley, thank you for being such a huge fan, it really does mean a lot! 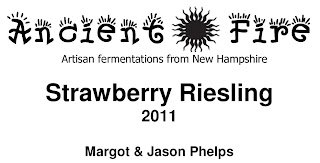 Over the Christmas holiday I opened no less than five bottles of my Strawberry Riesling wine made in 2011. This wine was a project hatched after talking to my mother about a similar wine she enjoyed on a vacation to I can't remember where. To make it I took half of a recipe for my flagship Strawberry wine and for the other half I used fresh Riesling juice. The result was a hugely drinkable, light, fruity wine that is medium to off-dry with moderate character.

As we sail into the New Year holiday I wish you all a happy and safe end to the year. It would be irresponsible not to mention that making arrangements for transportation, designated driver, cab, etc, is a must during those crazy New Year's celebrations. Have fun, be safe and get home to start the new year with maybe only a headache.

Jason
Posted by Jason Phelps at 11:50 AM