A few weeks ago I was invited to a Twitter chat with NASCAR driver Jeff Gordon and the team from Jeff Gordon Cellars to sample their newest (2008) Joie de Vivre red blend.  Straight off, this wine is delicious. It is big and full with a pleasing sweetness that was more pronounced in my experience for a dry, red, blend; but it works incredibly well. The breadth of dark, juicy fruits really shines in this wine. To me this is very much a drinking wine more so than a food pairing wine, but that is really just a statement on how well it drank on its own. The finish is gently sweet and the tannins are soft, chewy and well integrated.

Leading up to the tasting a number of us on Twitter were cracking NASCAR and car racing jokes to get everyone laughing. When Jeff Gordon arrived on the Twitter chat he was cracking some of his own, including a few about being a dad and having to steal away to chat about wine. That's real life!

The fruit for the wine is sourced from 3-5 different vineyards and the 2008 blend is made from Cabernet, Merlot and Syrah and aged in barrels (mostly 2-3 yr used) for 20 months. The online price for this wine directly from Jeff Gordon Cellars is $61, but you can get it for $55 if you order a case. Send me the other 11 bottles if you don't have room! Jeff Gordon Cellars also produce varietal Cabernet, Merlot, Pinot Noir and Chardonny, a Rosé of Syrah and the Joie de Vivre blend.

(The painted black bottle didn't have enough contrast with the gold lettering for me to get a good camera shot. )

I’ve never been to the Alsace region of France, but I do hope to get there someday. As a Riesling fan I have tried a few of the most well-known Alsatian producers' Rieslings with across the boards enjoyment. I've also found the Alsatian Gewurztraminers to be notable and that the Pinot Blanc made in the region is a great cocktail wine or an entre to a meal of wine pairings. So when I was invited to a Wines of Alsace dinner I immediately checked my calendar and was quite happy to find I was free.

The dinner was held at Cragie on Main, a well known and highly regarded restaurant located in Central Square in Cambridge, MA. Not having been there before I had no context for the food. Ultimately the menu prepared for the dinner was a made-for-us edition of their rotating sampler menu, so my ignorance did me no harm or good on this night. After realizing there were eight courses and ten wines however, I fully expected something exciting was afoot!

Dinner lasted over three hours and had several highlights making both a follow-up visit to Cragie on Main and an Alsatian wine acquisition sure things for me.

A Crémant, the Schoenhetiz Brut NV, was served with the first two amuse courses and after a few sips several of us also noticed the price, $14. This wine is a huge value at only $14!!! This is a beautiful bubbly made from a blend of Pinot Auxerrois and Pinot Blanc that comes off crisp, minerally with hints of sweet, baked breads and treats. Serve this wine as you would any Champagne or Sparkling Wine. 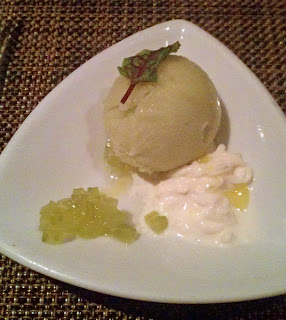 ( A celery/apple sorbet with a fresh pulled, local cheese. I would have
enjoyed this with the Crémant as well!)

I may have only had Alsatian Pinot Gris once or twice before and after thinking about when and where I didn't recall any lingering conclusions or wines of note. Not after this tasting! We were only served two Pinot Gris, but they both made an impact. First up was the Rolly Gassman 2004 Pinot Gris. The nose is overflowing with fruit, flowers, spices and a fullness to make it all sing. The wine is slightly sweet and made a fitting appearance with the pasta course that had a rich creamy sauce. 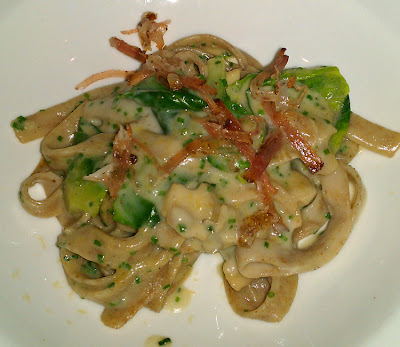 ( The pasta is a fantastic meal all on its own! )

The second Pinot Gris was the Charles Koehly 2001 'Altenberg Grand Cru' Vendages Tardives. This wine was served with a dessert of Whole Wheat Crepes, apples and a butternut ice cream. Slam dunk. Sadly we were told the story that the winemaker who was the sole heir to his family business had died two years prior to this wine's vintage. Very sad for the family and most certainly a loss for the wine world. This wine is concentrated and bit reductive, drinking like a Madeira for me, making for a great match with the dessert. The butternut ice cream has been put on a short list for a home project! 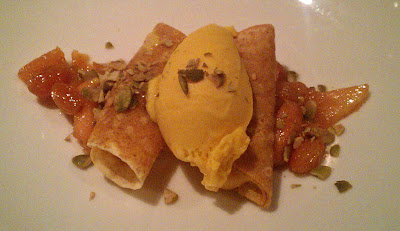 ( This dessert was really fantastic, and would be just so without wine. But why? )

The "Hengst Grand Cru" Zind-Humbrecht 2010 Gewurztraminer was outstanding for me because of the nose. The perfumed aromas of Muscat came to mind, but there was something a bit less wild connecting the fruit & flowers in the nose of this wine. Served with slow-roasted pheasant,the sweetness of this wine was well matched with the concentrated flavors of the confit on the pheasant. 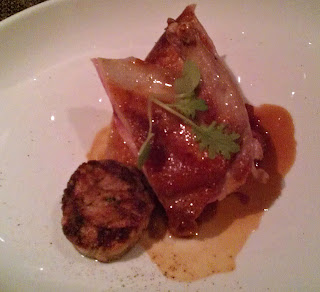 ( Pheasant. A terrible picture, I know. )

And of course we enjoyed several Rieslings, including one served from a magnum, which ended up being my favorite of three we tasted. The 2006 Trimbach "Cuvee Frederich Emile" from a magnum is drinking beautifully right now. This  medium-bodied Riesling is a bit creamy with lots of orange and citrus fruits in both the nose and mouth. The nose also has a spectrum of minerally and petrol aromas that are not so over the top to not feel at home at the beginning AND end of each sip.

The wine isn't sweet, but is also not dry enough to take away the sweetening effect when paired with something spicy, like Kampachi sashimi & pears with a miso dressing and pickled mustard seeds. 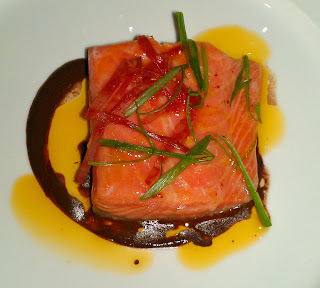 ( A Mi-Cuit Sea Trout which was paired with two Rieslings. )

One other notable wine was the Engelgarten Marcel Deiss 2007 white blend. A field blend of five grapes (Muscat, Riesling, Pinot Gris, Pinot Noir and Pinot Blanc) the wine has a beautiful orange laced nose with moderate sweetness through the whole taste. There is an exotic quality to the flavors in this wine, something magical which I believe is a perk of both the grapes used AND field blending, making this wine easily notable amongst peers made from single varieties. 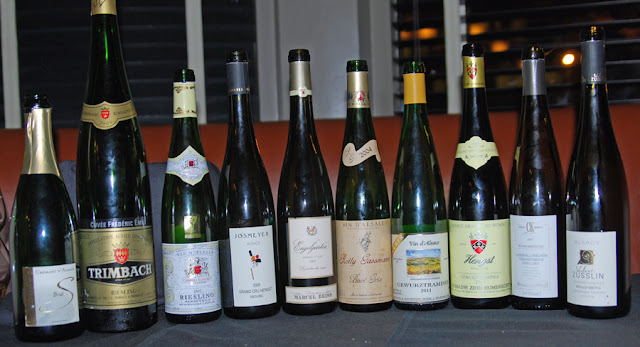 The whole dinner was a nicely woven mix of aromas, flavors and textures. Adding the conversation which ranged from Asian gangs and demons to the wines themselves, there were plenty of good times and smiles had by everyone who attended. Thank you's go out to Stephanie Teuwen and Louise Jordan with Wines of Alsace for hosting, Chris Lyons for inviting me to dinner and the staff at Cragie on Main for taking such good care of us. Tips of the hat go also go out to Richard Auffrey and Jacqueline Church for the great conversation and laughs!

With the exception of the Crémant the average suggested price on these wines is around $50. I believe the Frederich Emile Riesling and the Rolly Gassman Pinot Gris are both very much worthy of prices in this range. And don't forget the Schoenhetiz Brut NV Crémant for around $14 a bottle!

Disclosure of Material Connection: I received one or more of the products or services mentioned above for free in the hope that I would mention it on my blog. Regardless, I only recommend products or services I use personally and believe will be good for my readers. I am disclosing this in accordance with the Federal Trade Commission’s 16 CFR, Part 255: “Guides Concerning the Use of Endorsements and Testimonials in Advertising.”
Posted by Jason Phelps at 7:00 AM