Explore the many French wine varieties and enjoy.

Some notable sips from the last couple of weeks.

The Empire State Cellars Wine Club has really been delivering for me. I don't know the club curator (Lenn Thompson of the New YorkCork Report) well enough to think that we have the same tastes in wine, but based on the success of this particular bottle I think we are pretty close.

The Paumanok 2010 Grand Vintage Chardonnay is bottled using the Grand Vintage name which refers to the special nature of the wine as designated by the producer. Specifically, it is made using the free-run juice of the ripest batches of Chardonnay from the vintage and is fermented in new French oak.

The wine is elegant on the palate with a mild toasted and nutty profile and a creamy finish. The fruit isn't hidden with oak, rather the fruit flavors taste like something you would find in a pastry or other baked, sweet treat. The finish is dry (it is a tad round, but not sweet by my definition) and lingers a bit allowing the texture to be savored. I drank this wine on its own the first night, and quite happily, then fiddled around with a couple different dinner pairings, none of which were worth highlighting.

I met Sean Hopkins who owns the LobsterQ Restaurant in Hampstead, NH earlier this year. My foodie friend Richard Auffrey had connected with him previously and asked if I knew of the restaurant. I didn't, so we planned a visit to check out the joint. I enjoyed the food, people and atmosphere then and I have enjoyed the same several times since. But, let's fast forward a bit.

A few months ago Hopkins (should we call him Q or Mr. Q?) was tweeting about making a collaboration beer with Martha's Exchange in Nashua, NH. A smoked beer was the plan and Sean was hoping to smoke the grains at the restaurant to give the beer a firm LobsterQ profile.  I was intrigued and looked forward to the release so I could give it a whirl. 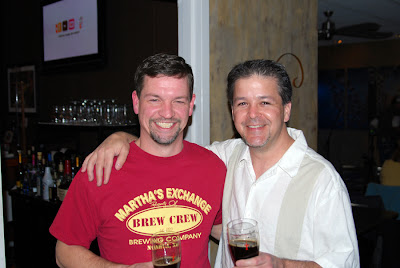 ( Greg Oullette, the brewer for Martha's and Sean Hopkins of LobsterQ. )

That time came, and to celebrate the release LobsterQ held a private event to debut the beer, named Martha Q's Low & Slow.  Low & Slow was paired with great people, food and music from two members of the Tom Dixon Band. The event was lively, fun and the only downside was that I had arrived home from vacation not even 24 hours earlier and was feeling a bit spent.

How about the beer? Martha Q's Low & Slow is a mellow smoked ale, one that folks who don't normally like smoked beers might enjoy. In a Facebook review for both Martha's & LobsterQ I said: " Martha Q's Low & Slow - slow cooked meats & sweet tobacco meet in a bar... damn fine smoked ale. mellow and hugely drinkable. Bravo!" The beer pairs well with BBQ, but I also found it melded nicely with fish & fries. The beer was made in a small run and is available on tap at both Martha's and LobsterQ while it lasts.

I'll Have Me A 'Gansett

I'm too young to say anything nostalgic about Narragansett beers. I've had the recent incarnation of several of their brews and have been pleasantly surprised.

I tried the Narragansett Bock last week and was excited for the mellow balance of sweet malts & grains. The finish is clean and crisp. This beer isn't anything special, not requiring you to savor or study it; and that I think is its virtue. It isn't tasteless, light colored swill but also isn't something uber-crafty that requires a PhD in beer to understand.