More From The Orchard 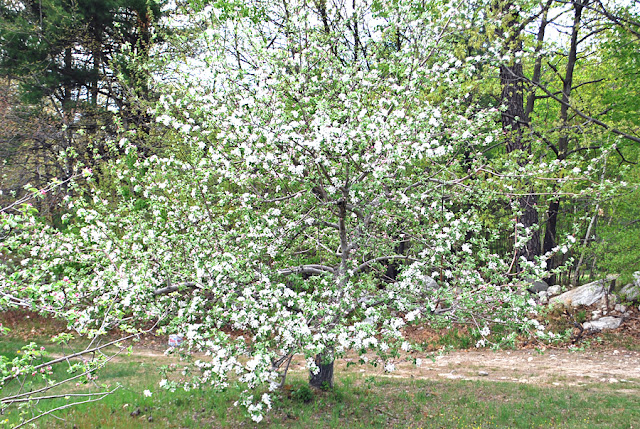 ( Apple blossoms right down the street from me in the Spring. )

Yesterday I offered up a bit of a primer on cider. A little bit of historical context, characteristics & regional variations, how it's made and producers you should know. It was a lot of information but I hadn't covered all the topics that I wanted to. Today I'm back with reviews of recent tastings, some tips on pairing cider with food and a little bit about my own experience making cider at home.

I try new ciders whenever and wherever I find them. I developed a taste for cider growing up in New England. Occasionally the fresh pressed cider from a local farm had gone a little hard and while I don't think I knew about the potential alcohol in it, I did like the tartness and minor carbonation. I never got to drink much of it, it was usually spirited away upon detection that it had gone "hard", but I enjoyed it nonetheless. When I did begin to drink alcohol, legally of course, I consumed cider frequently. For me it was a much better alternative to light beer when I had the funds to buy just for myself.

Samuel Smith Organic Hard Cider is medium dry with plenty of sweet & tart apple to go around this is a very enjoyable cider. There is a floral element to this that you will also see mentioned in quite a number of other reviews. Knowing what apple blossoms smell like, I have orchards on my street, I do agree that is what the aroma is most like. At 5% ABV this cider won't do a lot of damage in moderation. To me this is a classic commercial version of English cider.

The ciders from Angry Orchard are relatively new and until recently I hadn't tried all the varieties available in 12oz bottles.  I haven't yet tried Ice Man or Straw Man from the Cider House Collection. Both the Crisp and Traditional ciders are straightforward with the Traditional being the drier, sharper and more tart of the two. The Crisp tasted too juicy and fruity to me, but it isn't a bad cider to sit back and enjoy. The Ginger version is more interesting still, but I found the ginger flavor to be somewhat hidden by the apple aromas and sweetness. I found the Elderflower to have a skunky nose and it just wasn't a combination that I enjoyed well enough to want to drink it again.

Pours hazy and with an orange tint. The aromas are tart and sour which follows through in the mouth. The cider is funky, earthy, acetic, sour and much more interesting that I expected. The apple aromas and flavors are there but are very much masked by the Brett and sour elements. This reminds me of some of the sour Belgian ales and lambics I have had. The reviews at several of the craft beer sites for this cider were decidedly not positive. It left me wondering if the reviewers didn't know that Basque cider isn't like American cider.

I've been drinking Woodchuck ciders for as long as I can remember them being available (1991) but I had never had the ginger which has only been out less than a year. This is the best ginger flavor I have had in a cider, and something I hope to replicate in a cider of my own in the next season. The cider itself is dry so the ginger stands out with a potent spicy character and apples as the backdrop.

Bantam Cider Wunderkind is the best new cider I have had in some time. It pours pale straw in color and crystal clear. The tart apple and floral notes in the nose drew me in. Flavor wise this cider offers a spectrum and tart and sweet apple flavors and hints of ginger.  I would highly recommend this to anyone who can find it in or around Massachusetts where it is made. 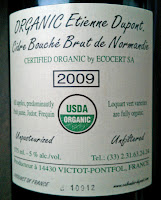 Ciders made in Normandy, like Etienne Dupont, are a real treat. In the traditional style there are unfiltered, barrel aged (fermented in part with native yeasts and sometimes Brett) and massively carbonated. This one was no slouch on any of those points. It poured and orange gold color and threw up apples, yeast funk and barnyard right away. In the mouth the cider apples reign and hints of spices come and go. There is some residual sweetness but it is kept in check by the acidity and carbonation. I bought a small bottle of this particular producer and now I know to buy the big one the next time.

Food & beverage pairing has become somewhat of a sport in the United State media, and I’m not sure that has been entirely beneficial. Matching food & beverages has an immense amount of subjective quality to it, and while most of the basic rules are valid, the focus on “perfect pairings” is driving people nuts.

Cider is an old beverage, a rustic beverage, and thus consumers of it anywhere there is a healthy cider-making tradition have tried it with absolutely every food-stuff available. This means there should be lots of experience pairing cider but it also serves to stoke the fires of subjective judgments of which regional foods & ciders go together best. We've lost a lot of the cider tradition in the US so our experience with it on the table isn't as tangible as it could be. It's coming back though. Let’s take a look at some of the basic rules in terms of cider & food pairing. No matter whether you are new to cider or not some of these suggestions will open up exciting possibilities for you to try. 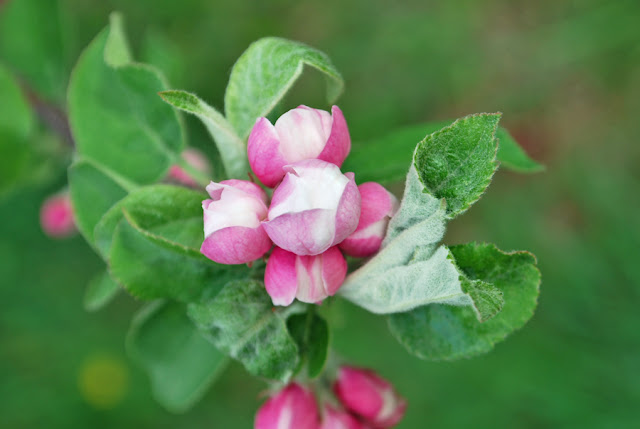 ( Up close with some apple blossoms. The smell is so wonderful! )

Dry, highly carbonated ciders can be paired much like Champagne and sparkling wine. The most significant difference is that the aromas and flavors are more focused around apples, but in versions that have balanced flavors it shouldn't cause pairing problems. So this means pairings with lots of different appetizers, especially fried ones, tapas, oysters and shellfish.

Cheese is the ultimate pairing tool for me, but I am a sucker for cheese! Cheddar, especially aged types, pairs well with cider. Dubliner, an Irish import, is particularly nice with both dry and medium dry ciders. Goat cheese pairs nicely as well, and even better with added fruit or a chutney. Funky cheeses can pair well with cider, and if you match some funk with funk (French & Spanish ciders) you might make magic! Blue cheese is a good match for sweeter ciders.

Poultry and cider can be paired very well, and I've often found cider to be the best match for something like Thanksgiving dinner and the convergence of all those textures and flavors. Roasted chicken with herbs and a medium dry to dry cider is a combination that I've enjoyed many times.

Desserts and any sweet treats containing apple can be paired with cider, and the basic rule of matching sweet with sweet does apply. Fresh baked apple pie with a glass of ice cider is a combination sure to please!

Making cider at home is a straightforward act. I recently wrote a post about "scrumpy" and I presented a countertop version of it that only takes a couple weeks to ferment and is consumed before the fermentation is complete and without any fining or filtering. Check out Adventures in Fermentation - Scrumpy to see how it's done.

Cider-making at home can be much more elaborate, and if you ask my wife she'll tell you I've gone there and will likely go even bigger the next time. I made my first hard cider in 2005. I have access to fresh pressed cider from several local farms so getting the ingredients has never been a problem.  I've made hard cider from varietal juice, Mutsu in particular, as well as the "house blends" from five area farms. The only consideration about the starting product that I have made up to this point is that it can only be UV treated, but NOT pasteurized. Living sweet cider makes the best hard cider. The results have spanned a broad range, from really tart, sour & dry to gently sweet with a beautiful nose of apples and apple blossoms. Duplicating the best outcomes has been hard because each new season of apples is different.

In 2009 I embarked on a big cider project. I was interested in making several different styles of cider from the same source. I started with 35 gallons of fresh cider. I used different yeasts and finished some of the ciders with homemade fruit syrups. All of the cider I made for this project was still. I had lost a fair bit of cider in 2007 to overcharged bottles and I was loathe to see that happen again. 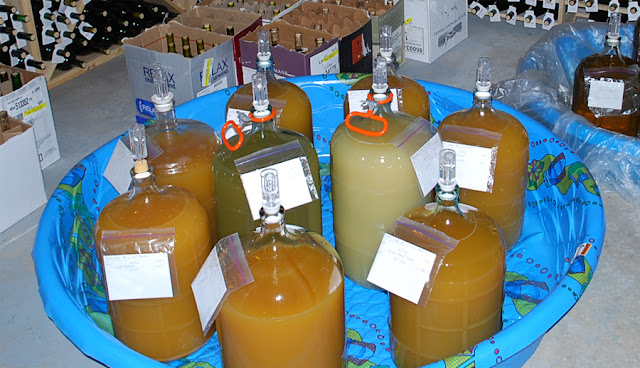 ( The seven carboys around the outer ring are from the 2009 project. )

The outcome was very educational. The unflavored cider made with the traditional cider yeast was good, but the least interesting. The ciders made with a Sweet Mead yeast were naturally a bit sweeter and had a more complex nose. The ciders made with cherry, strawberry and raspberry fruit syrups ranged in sweetness with the raspberry one tasting like raspberry/apple candy. The best outcome was the unflavored cider fermented with Rudesheimer yeast which is actually a yeast used to make German Riesling wines. The complexity of the cider was beyond all of my wildest imagination. I named it "Rudy" and coveted each bottle that I pulled from the cellar to enjoy. That cider went on to win a first place at a regional homebrew competition and the feedback from everyone who tried it was overwhelming. If there is ever a cider I would like to recreate, it would be this one. 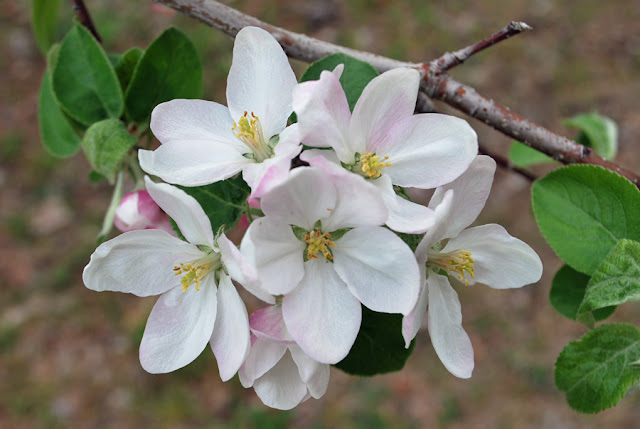 ( Open apple blossoms. They are nice, but boy do they create a lot of pollen in the neighborhood! )

With the exception of pressing the fruit myself everything else about cider-making at home has been the same as it would be for a commercial producer, albeit on a smaller scale. In 2013 I do plan to make a larger volume than I have made in the past. I plan to blend ciders from multiple sources, use several different yeasts and even barrel age some. I've also considered using cryo-extraction to create the base for an ice cider, but that has to wait until winter comes again in New Hampshire, something I am not thinking about at all right now! I will likely get the chance to crush and press my own apples this year too. One of my brew club friends has access to lots of fruit from a family orchard and with a little bit of elbow grease I hope to bring home my hand pressed cider and make something delicious with it.

Once again there is a lot of information here. To me cider is really exciting and sharing all of this information was an exciting task. I look forward to answering questions and sharing experiences during #winechat tonight.

So what I am going to be drinking tonight during the cider conversation #winechat? I have some homemade scrumpy that I will start off with then I am going to open a bottle from the Dooryard series made by Farnum Hill and maybe a bottle of Newtown Pippin from Original Sin Ciders.

Awesome reviews. I love cider and I always love to hear what people are saying about what's going on in that world. This helps a lot for when I see a new label pop up on my radar.

I'm a Strongbow girl through and through - not as sweet as some other ciders (I prefer dry, check it out!

Thanks for stopping by my blog! I enjoyed reading about the cider you have tried- Farnum Hill is on our list of places to go. Thanks again, I look forward to reading more!
Megan
brewwinefun.wordpress.com