Breakfast at the Gorge 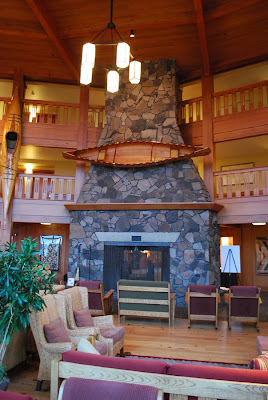 Ahhh Breakfast…going out to dinner is great, but give me a good breakfast over that any day. Starting my day usually with a fruit smoothie, or Special K cereal it is nice to take a break on vacation. Words like griddle, toast, and omelet or better yet……homefries, make me so happy. I suppose I get it from my Mom who lived for weekends when she could make her and my dad breakfast: eggs (his poached, hers were fried), toast and bacon. I mean, when the woman finally had her dream trip to France she went out and bought a fry pan, eggs and bacon because the host breakfast of fruit ,cheese and bread did not cut it. Now that is commitment!

One of the things that I most looked forward to when we recently stayed at the Skamania Lodge in Washington was the fact that they had a full restaurant on premises that served breakfast. Boy, I was not disappointed. On my own for breakfast and lunch each day (that Jay guy was in winemaking classes….) I got to plan my day. And plan I did, entirely around breakfast. I figured if I had a big breakfast a wee bit later in the morning I could skip lunch. It was well worth it.

If you are interested in checking out their dining options you can do so here http://www.skamania.com/columbia-gorge-dining.php

Day One: Meandered down to the restaurant which has breath taking views of the gorge. The smell hit me immediately. They had a good looking buffet but I was all about the Salmon Hash that I had seen on the menu. When it came I was not disappointed, you could tell it was all freshly made. Shredded potatoes (not those crappy frozen ones) julienned peppers and onions that we slightly crunchy and not greasy at all. This nest of flavor was topped with two poached eggs and a huge piece of fresh salmon. I was happy that the salmon was not over marinated or smothered with some sauce. It had a light, slightly spicy, dusting of flavor. Topped off with some freshly made sourdough toast and strawberry jam and I was a happy gal. Note: this illustrates one of my favorite things about breakfast over other meals, you can always blend salty and savory with sweet.

Day Two: Well, I’ll be honest this was the morning after I was at a Winemaker dinner with over 400 amateur winemakers who all brought some wine to share……I’ll leave my condition to your imagination. Moving a bit slow I decided that room service was best. This time I went all out, the Blue Dungeness Crab Omelet, served with homefries of course and a fresh fruit smoothie. Everything was good and hot. I would say though that the flavors were not quite as balanced as the Salmon Hash the day before. There was a lot of crab but even the quantity could not make up for the huge amount of cheddar cheese fighting for attention. It would have been better, I think, to have used a smaller amount of a more flavorful cheese, like goat or maybe even gorgonzola. This would have added some salty flavor without smothering the crab flavor. The smoothie was great and, let’s say, medicinal for my ailment.

On our last morning I finally had company and we decided to go to the restaurant and partake in their champagne buffet. The food was good, and there was A LOT! Pastries, and omelets, carving stations, desserts, an assortment of lunch items. Though I enjoyed all the food it was not quite as good as my made to order breakfasts were. I had Jay try the Salmon Hash after my wonderful experience and it was only OK. The salmon had been shredded rather than one large filet and the potatoes, peppers and onions a little limp, all of this as a result of being a “buffet”.

In the end, if you head to the Skamania Lodge, definitely get some breakfast. But, if you go to the buffet remember the golden rule: No matter how much it costs….it’s still a buffet, even if they are serving champagne.

Good read! Like the way you describe the dishes you enjoyed, can almost see them:)

Great story ! As a French, I rarely eat in the morningt, and I'd get the opposite problem of your Mum. The menus you describe would make great lunches for me.


Is this a huge fireplace or an elevator on the photo ?