We can often take our hometown for granted; we think that we know everything there is to know about it. When Jay and I started our journey into food and wine I would read articles about other towns and locales and lament that we should move there to be able to have access to some of these amazing restaurants and food experiences that I was reading about. Today I learned:

We went to The Republic Café on the recommendation of my friend Will, who has a wonderful blog about Manchester , www.fortressmanchester.com ,which among other topics features local businesses. The Republic Café describes itself as a place that is welcoming to all that is designed for not only eating but conversation and socializing. Their menu highlights “local, sustainable and organic products whenever possible.” After my experience today I can say that they have succeeded in achieving their goals.
The atmosphere was cozy but open, with obvious attention paid to mix a modern feel while having the exposed beam and brick pay homage to Manchester’s Mill Town roots. We were both happy to see that the kitchen was open allowing us as food dorks to sit and watch the action and, since everything appeared to made to order, there was a lot of action. The staff was fabulous, when they overheard us talking in detail about food and food experiences they were only too happy to converse with us about some of the restaurant’s other dishes. As Jay put it “we found our people”. Our server even gave recommendations on where to find some good local beef and bison for home cooking. 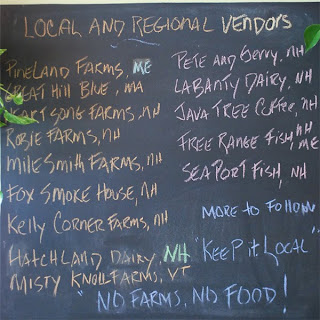 Ok, now on to the food, as I know that is what you are all waiting for, here is what we ordered:
Starter: Hummus Republic Style and a Basket of Fresh Foccacia. To drink Jay had Bonny Doon Vin Gris Cigre, a French style rose while I had a glass of Diana’s White Sangria.

The foccacia came to the table nice and hot with the fresh bread smell that we all love made us both smile. It was toasted so that the crust was crunchy but the inside stayed soft and welcoming. There was a bit of sweet onion on the crust which went very well with my sangria that was light and fruity without being too sweet. Jay mentioned that the slight sweetness of the onion made the tartness of his wine come out. The hummus was terrific, creamy with some texture throughout and a slight hint of heat. We both agreed that we could taste: dill, tomato, red pepper (this is where we think the heat came from), and some type of aged cheese. As we ate the hummus we immediately started coming up with ideas for variations on this recipe that we could make at home. As many of you will agree, often times the sign of a good dining experience is that it immediately sparks your own cooking creativity. This definitely happened at the Republic, numerous times. 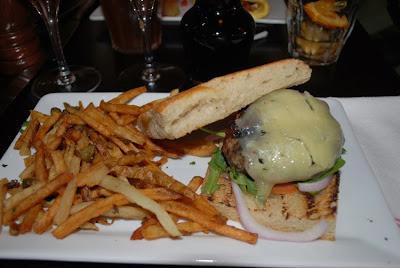 Main Meal: Jay order one of the specials of the day, a burger made from NH grass fed beef with Republic Frites. To accompany his meal he had the Agua de Piedia Malbec. Since they were still offering breakfast I opted for the Lamb Marguez Sausage omelet with peppers, onions and feta which was accompanied with homefries and a glass of iced tea.

You could smell Jay’s burger before it got to the table, and the great thing is that what you smelled, and tasted, was beef….not grease. Jay best described the beef by explaining that it tasted “clean”. There was no need for an overdose of salt or seasoning as the meat had such a wonderful flavor and it was allowed to be the star. The arugula on top was a perfect match and Jay said that they just “go together”. The Malbec was a great match too, peppery with an earthy taste and just a hint of wood smoke. The long smooth finished really went well with the freshness and earthy flavor of the beef.

Not to be out done the frites were no mere side dish, they were a standout all their own. What made them so wonderful and surprising is that they were fried and served with fried capers which gave them the saltiness that you look for with fries without having them covered with table salt. The saltiness was almost infused into the fries, similar to what happens when you drizzle them with malt vinegar. This way allowed them to stay crispy. Delicious (and I know this because I stole more than one from Jay’s plate!) 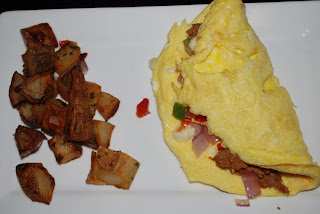 I knew my omelet was going to be good as soon as it was set in front of me as it was not smothered in butter. The eggs where light and fluffy while the lamb sausage added some wonderful texture without adding any grease. The sausage had a range of lovely flavors. I could taste cumin, mint and fennel among them. There was just enough feta to add flavor without throwing everything out of balance or adding to much salt. My homefries where a good pairing with the omelet because they were balanced well and the seasoning used was meant to bring out the flavor of the potatoes, not disguise it.
Though full we needed to try dessert (all in the name of research you know) and settled on the Olive Oil Cake with citrus. The cake was similar to a crumb cake but was moist enough that it would be eaten on its own. Plated with two types of sauces, one a citrus sour cream, the other a honey citrus sauce, the cake was the perfect ending to our meal. Jay commented that a small portion would make a lovely palette cleanser between courses since it wasn’t very sweet. 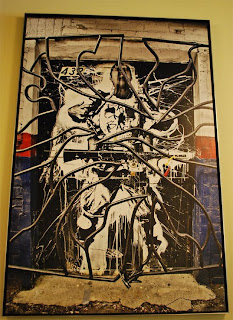 We left the Republic Café happy and full, but not weighed down which is not an easy task. If asked to explain the food in one word I would say, balanced. With all our dishes this café found a way to let the different food and ingredients shine. Throughout the meal we commented that you could taste each individual ingredient with no one ingredient outweighing the other. In our over-seasoned and over-processed world the Republic Café was a reminder that with good ingredients, care and joy for what you are doing less is more. The joy that they have with what they are doing is evident, they are a food lover’s café, run by food loving people and that is what really made the difference.

So, whether you are looking for a great meal, or want a friendly fun place to have some wine and appetizers the Republic Café would be a good fit. Their menu is specifically designed to allow for a group of friends to socialize over some great drinks and share some wonderful dishes. They have cold and hot antipasti that can be mixed and matched to allow a sampling of everything. Just make sure you order the frites, or, steal some from your husband……

You can find the Republic Café at:

Nice write up...Love the board:) Food looks and sounds wonderful!