Relay For Life – It’s Not About the Food 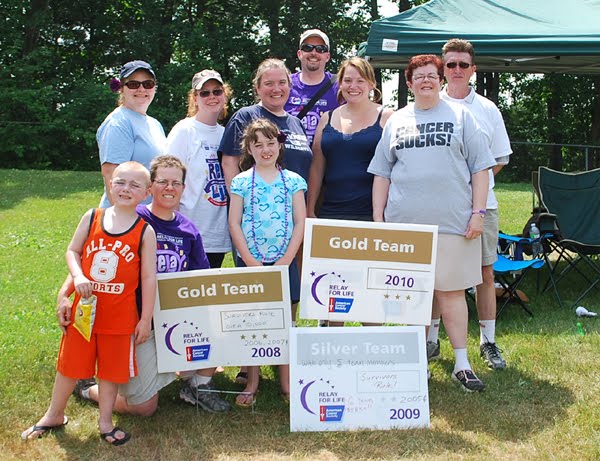 My wife and I captain a Relay For Life team every year. This event is unique because teams setup camp sites at our local high school track and walk all night to support the battle against cancer. This event isn’t about food, and because it is family friendly it is alcohol free. We did apply for the Foodbuzz 24x24 event to host a cookie/brownie and soda pairing at our Relay but were not accepted. A loss for Foodbuzz for sure, and here is why. Our team, named Survivors Rule!, is the most successful team in the history of the Relay For Life of Greater Derry & Londonderry, NH. Our hard working team has come in first place (for fundraising) 4 out of the last 5 years, having raised more than $10,000 each year in those same four years. Our total funds raised as a team, supporting multiple charities since 2003, is over $72,000!!!! Back to the real story though.

When you camp out at Relay you commit to no showers, minimal sleep and whatever food you can bring in or happens to be around. Some people bring grills, but our team has learned one thing with Relay, keep it simple. What you bring in on Friday night when you have lots of energy you have to bring out on Saturday at noon when you are wiped out. For us that means we bring snacks, drinks and rely on the Derry Rotary who run the snack bar for more substantial food to keep us going. The food is simple and designed to give you calories to burn off on the track. When most of the team is aiming for marathon distance of 26+ miles, it doesn’t matter what the food is, it just has to be easy and energy producing.

This year there were some culinary standouts though. Beantowne Coffee House from Hampstead, NH setup a full coffee bar at Relay for the second time this year, a much needed staple for the walkers. Beantowne served up lattes, hot and iced coffee and snacks/sandwiches to many people. We enjoyed the iced offering which Margot was told was cold pressed, and technique used to enhance the flavor of the cold coffee. I very much enjoyed this coffee, especially because I was losing steam and needed a boost. I drank it fast during a sock change and then headed back out to march that track as a soldier in the battle against cancer.

Nothing at the Derry Relay tastes as good as a McMoody egg sandwich early Saturday morning. These tasty sandwiches are the hallmark of the morning crew from the Derry Rotary and have their own special announcements when they are ready. They consist of scramlbed egg, Canadian bacon and cheese on a flat top grilled English muffin. They are so good at 6 AM when you still have six hours to go until you are done. I forgot to get a picture, but at 6 AM after being up most of the night my brain wasn't worked well. Enjoyed with a hot cup of coffee and donuts from the local Dunkin Donuts, it almost seems like there isn’t anything better! 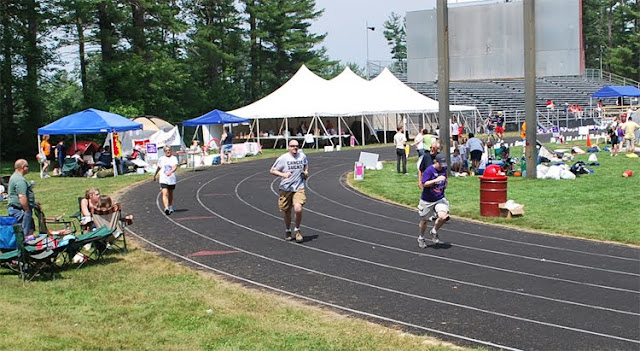 (Jen and I showing Cancer who's boss!)

This year our team came in first again and raised over $11,500 in the fight against cancer. I met a recent cancer survivor (Jen) who has several weeks to go in her treatments and is extremely defiant in the face of her own diagnosis. At 11 AM I had one lap to go to reach my 30 mile goal and I chose to run it as a sign to anyone who was watching that cancer can come knocking, but it better not get comfortable. As I motored down the track Jen came up fast alongside me and with the comment “if you can do it, so can I” she kept running ahead of me. I still get goosebumps thinking about how awesome it was to have to chase someone with so much energy at time when her doctors think she should be suffering from low energy and be tired. We finished that lap to cheers from our teammates, something I will cherish forever. As a cancer survivor I have worked hard to give back in support everyone who must battle this disease. While this event doesn't pair well with my food-obsessed lifestyle, it does give me the ability to do something wonderful during my time on this planet.