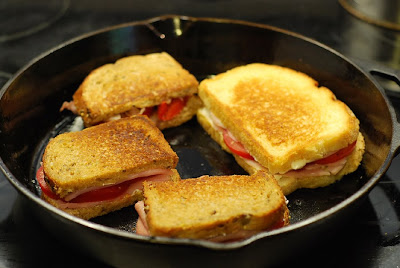 My mother, Helene was an amazing woman. Her and my Dad had six kids, and eventually took in three more. Even though money was tight there was plenty of love to go around. The house was crazy growing up and as the youngest I had more than my share of sibling, well, let’s call them “issues”. With a small budget and many mouths Mom always found a way to make food stretch.
The culinary background I came from was made up of words and phrases like: instant, ramen, boil in bag, cream of, canned, roni (ex: pasta-roni, rice-a-roni, noodle- roni) seasoning packet and Kraft. Mom did her best and to be truthful she shined on the holidays which were filled with delicious turkey, Canadian pork stuffing, homemade peanut brittle, sucre a la crème (a Canadian fudge) and oh her delicious, fought over doughnuts. During the holidays there seemed to be a bit of extra money and more time to make the food just right (most likely due to threats of no presents if we made her too angry).

One of my favorite treats she made when she could was a grilled ham, tomato and cheese sandwhich.

Take two pieces of white bread and spread cream cheese on the inside of each slice. Then place a piece of ham on top of the cream cheese on one slice. Top the ham with fresh tomato slices, another piece of ham and them the second piece of cream cheese bread. Coat the outside of the bread with butter (Mom used margarine) and grill on each side. Simple and delicious this sandwich was one of my favorites and a treat as deli meat was not always in the house due to expense.

My Experimental Make Over

The replacement for the cream cheese was easy, I used Chavrie Brand Goat Cheese. I have come to really love goat cheese over the last year, its tanginess has always reminds me of cream cheese. I kept the tomato because to me that was such an essential ingredient, but replaced the white bread with whole grain to add some earthiness to go with the goat cheese. Where I was stuck was the meat. Mom used plain old deli ham, no smoking, or strange curing, honey this or maple that. I really wanted to try something different, but was not sure of what. I came back from the deli counter with the following: 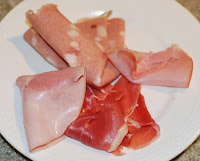 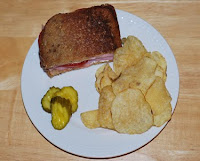 Prosciutto, cause it was a good excuse to buy some.

And Mortadella , which was purchased because I had heard about it but never had it.


I made Mom’s version just as she would have (though I have to admit I replaced the store brand white bread with English toasting bread). Then I assembled half sandwiches using the Goat Cheese, Whole Grain Bread, Tomato and one of the three meats. Rather than spread the butter on the outside of the bread I melted it first and then brushed it on. I have found when grilling sandwiches this creates a much more even grill.
Jay and I had a taste test and this is what we found:

Prosciutto : I did cook the prosciutto in a pan over medium heat prior to using it on the sandwich and that worked well. Once on the sandwich the meat really overpowered the rest of the ingredients. Jay thought that when he had a bite of the sandwich without the meat it was great because the salty essence of the meat was there without being too strong. I would probably do this again in the future but finely chop the prosciutto and sauté it then mix it in with the goat cheese before I spread it.

Canadian Bacon: This worked quite well but ended up with the opposite problem of the prosciutto, the meat was overpowered by the other ingredients and left no real mark on the flavor.

Mortadella: Ah, this one was surprising, Jay and I both agreed it worked really well and balanced perfectly with the other ingredients. The Mortadella held its own flavor without being overpowering. The texture of this pressed meat worked extremely well with the crunchy grilled whole grain bread.

Mom’s classic version: Nothing bad to say about this. It is the original and still brings me back to childhood. As I have made it for Jay throughout our marriage he called it familiar.

The overall winner was the Mortadella, goat cheese, tomato on whole grain bread. It was a fun twist on familiar flavors and really brought more complexity to the party. We will most definitely be making this one again.

Until next time I encourage you all to try a new twist on a child hood favorite. For my first in a series I think this went well, good food, good memories…..great Mom.

What great post its like having an Iron Chef competition in your house well done. I am going to have to try this approach to an upcoming post.

A terrific makeover! The sandwich sounds super delicious with the Mortadella & goat cheese!

@5 Star Foodie
Thanks Natasha. Margot enjoyed reading some of your blogs as she prepared for the experiment. Definitely a fun way to relive some past and make new futures.

Oh, an adult grilled cheese. I love it! That looks absolutely heavenly.

Great post...Agree on the winning results:) How grand to turn childhood favorites to current day loves.