In honor of the World Cup we selected two wines from countries participating in the cup to take with us on our first visit to Margot’s sister Celeste’s new home.
From the host country, South Africa, we selected the Indaba Sauvignon Blanc 2009 and from Spain, the Marques de Caceres Rioja Reserva 2002. My brother-in-law Bob is not as much of a wine drinker as the rest of us so I also put some of the homemade Belgian White and Belgian Trappist on ice for the trip. We didn’t know what was on the menu so I hoped my wine choices would have broad enough food worthiness to work.

Upon arriving Celeste indicated she had used a new recipe and was openly nervous about how it had come out. Unfortunately being so food obsessed makes people think I never have a so-so or bad experiences. I do, and often. With the amount of stuff I try not all of it can possibly succeed the first or ever!

We all sampled the Sauvignon Blanc and the beers with some snacks and tours of the new house. The Sauvignon Blanc was universally liked and clearly demonstrated some citrus and cut grass flavors. It was crisp and acidic, but not overwhelmingly so. I had also brought along some of the 2010 Thomas Hooker Watermelon beer to try. I had been told it was better than the previous year, their first, and that information was correct. Both the flavors and aromas were more pronounced with a bit more of the citrus aftertaste I had expected when I had first had it. It wasn’t a fan favorite, but it was being sampled alongside my Belgian White which has proven to be a strong competitor.

With the secrecy of the menu finally removed we sat down to a wonderful dinner, good wine and hilarious conversation. 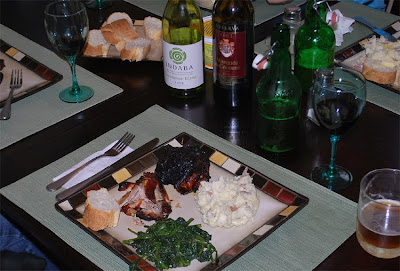 Baked Chicken with an Apricot Preserves, Onion Soup Mix & Oregano Glaze
Creamy Red Mashed Potatoes
Sautéed Spinach with Garlic
So the apricot preserves on the skin of the chicken had worked its magic and become crispy and well cooked. Celeste was so hung up on this. The skin peeled off easily and underneath was a flavorful and delicious piece of chicken. We finally had to tell her stop going on about it, and I told the story about Cuban-style pork I made a few weeks back that took tools to find the meat inside the charred exterior!

I spent a few minutes with the Rioja before I ate just to get a feel for the wine. It had nice red fruit flavors, some wood and had a long smooth finish. Later Celeste remarked how much she loved the wine as she killed the bottle. She and I love to hang out and drink wine. It had been too long! 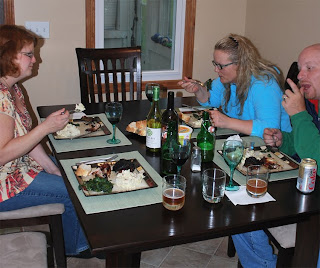 Both the Rioja and the Sauvignon Blanc went well with the chicken and it was a toss up on which one could be deemed a better match for it. The spinach and the Sauvignon Blanc went very well together, although the potatoes made it taste a bit sour, not a surprise at all. The Rioja worked better with the potatoes, but seriously, they were so good on their own I wasn’t struggling for a good pairing.

Dinner with family was spectacular. We never did get the name of the person who made the chocolate and peanut butter cake we ate for dessert. We do know they work at one of the local Shaws Supermarkets though…

We did watch some of the USA vs. England World Cup match earlier in the day and I am hoping to have some more fun pairing wines to the games as the tournament plays out. What a great excuse to try some new wines and yell at the TV for a while.

Marques de Caceres Reserva is one of my favorites !!!
Well, I hope one of these days, you taste an Argentinian one !!!