I found myself in Montreal unexpectedly Monday and Tuesday this week. Margot’s uncle Gerry lives in the city making the destination a strong family tie for us. We visit him there at least one or twice per year and despite his failing health (the reason for our spontaneous trip any my shortage of posts and tweets) and its eventual change in our purpose for going to Montreal, we know and love the city and will always want to go back.
We’ve adopted a simple ritual when in Montreal, find new beers. Quebec has its own generation of craft and small batch brewers with a wide range of styles to choose from, and several you can visit in the city. We sampled from the beer selection at the IGA this time, and while we found some interesting beers, the lack of any choices from Dieu du Ciel (a favorite of ours) was disturbing. We’ve gotten them at the market in several other places in the city so location may have played a part.
The slam dunk choice for us was the Noire (oatmeal stout) from St. Ambroise label, produced by a Montreal-based brewery. We discovered their beers on our Montreal Beer Adventure in April so I was happy to see it available to try again. We are going to visit the brewery on an upcoming trip. We’ve had a local confirm their patio overlooking the river is the place to taste some beers! I also saw an Apricot Wheat from the same brewery, and despite not being a huge fan of fruit beers I gambled on it, finding it to be one of the better fruit beers I have ever had. The 3 label mixed pack from Les Brasseurs RJ, a company we tasted new beers from on our last trip as well, offered a white ale, spiced Belgian ale and a spiced buckwheat ale. Interesting and intriguing and the only one with a high alcohol brew in it, so I took it! We bought 3 six packs total assuming at least one bottle of each of the 5 styles would make it home for a second tasting. 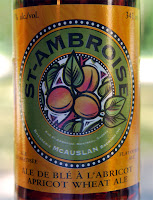 I started with the Apricot Wheat. The aromas were solidly fruit and grain driven and well pronounced. After my first sip I immediately was drawn to the length of the apricot flavor and that is doesn’t taste incredible manufactured. The wheat beer is slightly creamy with just the right amount of carbonation. The aromas and flavors don’t fade and the refreshing character of the beer stuck with me to the end of the bottle. I definitely see this is a fine summer beer and one I hope folks get to try when in the area. 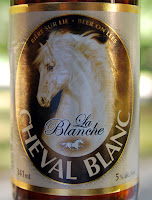 The next one I tried was the Cheval Blanc. I really dig hugely aromatic Belgian white ale style beers. The spices, yeast and fermentation aromas are magical to me and make drinking the beers exciting. This beer had a good sized nose on it and delivered in taste very well too. It is a light and cloudy beer true to style. It has a lighter finish than most thought, one that doesn’t last which to me means it isn’t designed to be a dethroner of the more finely crafted versions of this beer.
We headed out to get so dinner at this point. We hadn’t been out to Rueben’s to get smoked meat sandwiches in several visits. This isn’t the absolute best and only place to get smoked meat in the city, but is close the hotel, serves well prepared meals and has great service. We split a sandwich with poutine as a side dish. We also ordered some cereal battered chicken fingers that came with fries and Dijonaise. How freakin’ Canadian is that? Everything was good, despite the heavy emotions surrounding our visit. I didn’t take any photos where I was there so you will just have to imagine the table of food!
Back at the hotel we clicked around on Montreal hotel television looking for something hugely funny (in French) or something relatively mundane and in English, but would likewise make us laugh. Some of our fondest memories of stays in Montreal, outside of visiting with Gerry and his friend Eloy in the city, are of watching Bat Thumb, Fraken Thumb and other hilarious stuff on late night Much Music TV in the early 2000’s.

Next Margot and I split a Noire from St. Ambroise. The beer just smells legit. The malty aromas lift off the surface of the beer. The flavor is bold but not obnoxious with a creamy texture that makes me think that this is what good Guinness used to taste like! Most of these came home with us and we will absolutely be buying a whole case of this on our very next trip.

The next one I tried was the Coup de grisou, a coriander infused buckwheat beer. I didn’t find it to be terribly inspiring, although it was refreshing and does have some merit as a lighter beer with full-character though.

The final taste was the d’Achouffe from RJ. This is a Belgian golden ale infused with spices. I’ve had several of these before and I especially like this when it comes in strong form with significant spices and fermentation aromas in the nose. I actually plan to make something of that ilk in my next round of beermaking in about a month. This beer clocks in at 8%, the only strong one of this tasting for me, and is pretty well nuanced. The aromas and flavors are there, but it felt a bit unpolished, almost rustic. Not having a lot of experience with the style I couldn’t say if this is a good thing or not. I’d definitely drink it again for what that is worth.
Being a commando trip there wasn’t anything more of note from the city. We did enjoy walking around a bit in between family visits, but taking time off on short notice had us tied to the hotel and our PCs helping to keep things moving back the office.
Cheers!
Jason

A roundup of past Montreal beer posts:

Best wishes to you thoughts of good health to you and Margo's uncle. Thanks for the post. I love beer and Montreal. I know you're a drink specialist and love Montreal too so this is a must-read post for me.

I enjoy dark beers but in your post L'Achouffe and Coup de Grisou (sp?) really caught my attention for the spices. The Apricot white also looks tasty. I'll look for them in our local "Beers of the World" store. :-)