Margot and I generally host at least one open invitation summer party each year, sometimes more if we've got the time. We try to plan different parties each year, switching up activities or picking a theme for the food. This year we organized a blind tasting of four different regional wines for a Summer of Riesling (#summerofriesling on Twitter) event with our guests. 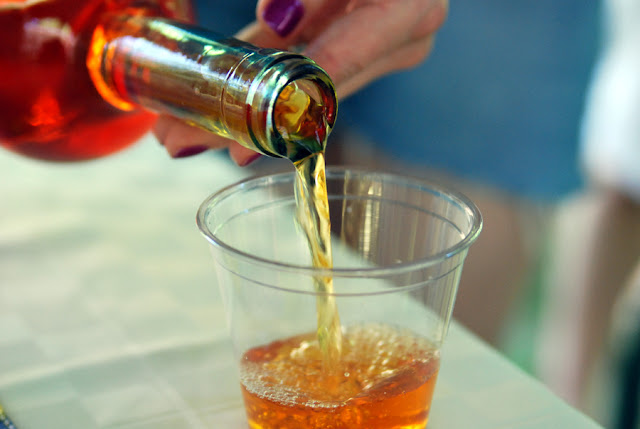 We kicked off the party with some local and homemade wines, a Sauvignon Blanc from Candia Vineyards and our own 2009 Strawberry wine. The strawberry from 2009 is widely regarded as our best. The 2010 isn’t much different, but different enough for it to get a second place amongst friends. The Candia Sauvignon Blanc is light & fruity in the nose and in the mouth with a slightly sulfury finish.  I bought this bottle after a tasting last year and I am not disappointed as I am so much wondering what the cause of the off finish was. I’ll be reaching out the winemaker to inquire. 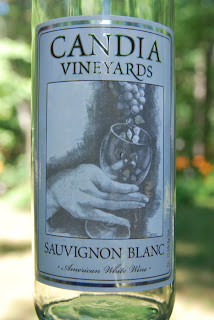 I next brought out my underwhelming 2010 Sauvignon Blanc. It has too much bell pepper and has an acid imbalance. It is drinkable, but not excitingly so. Blending was suggested, and as a component of our 2010 White Blend where is does better, but not by a lot.
Last week I introduced and kicked off the Ancient Fire Summer of Riesling events with a food and wine pairing. Check out Summer of Riesling online and at local wine & food shops near you. This installment is going to be blind wine tasting of four regional (US) Rieslings.
Margot and Missi bagged up the four bottles of Riesling. I knew the states and labels, but in fairness I had never had the selection from Koenig in Idaho, only had the Ferrente from OH once last week and the NH wine from LaBelle over a year ago at a tasting. The Six Mile Creek (NY) Riesling was from a recent shipment and was something I expected I might recognize. The Salmon Creek Dry Riesling (also NY) was used as a control wine and to dispel the sweet Riesling myth. While some of the wines being tasted blind would be sweeter, others would be similar in dryness to the Salmon Creek.
Everyone got to tasting in any order they wanted. I was taking some notes as I usually do, mostly to classify the attributes of the wine in hopes they might speak to me about which ones were from where. There wasn’t a clear advantage even with my knowledge, but in the end I did guess all four correctly having written it down before the unveiling of each. I don’t take that outcome to be a sign of much. Not being intensely familiar with any of the states’ wines, except NH to a degree, I had no real context. So what I would say is that I was able to nail the NY wine and then got real lucky with the other 3!

I went in numeric order like a good little engineer. I found the Koenig to have a great nose of sweet apple and pear, but the tartness on the palate and in the finish seemed a bit disconnected. Nobody outright said they would never drink it, but there were some quizzical looks about the relationship of first impression in the nose to the very different taste.
Number two was the Ferrante from Ohio. Tammy Colson, one of my new WBC friends, passed this bottle on to me last week as we were heading home. I enjoyed it during the Other 46 tasting and knew I could give Ohio exposure with my friends back home with it. The minerality was the big note for me when I tasted it. It is medium-dry with aromas of peach and pear. I also picked up hints of citrus on the finish. I didn’t immediately attempt to guess the states until I tasted all 4, but even then I was guessing and not confident I had much to work with! 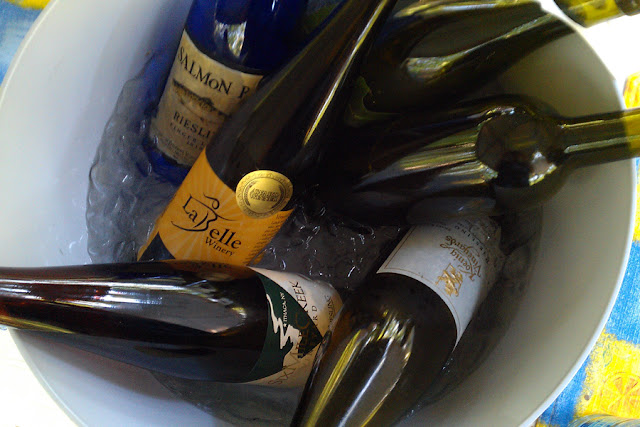 When I got to the third wine, the Six Mile Creek, I pronounced a classically German Riesling character and a well made sweeter style wine. In my head New York was my hands down guaranteed correct answer. There was a good deal of fruit in the nose and an oily aroma/textural element on the palate.
The LaBelle Riesling from New Hampshire was the fourth wine. I believe we have only had this wine at tastings and the last one was a year ago. I got a good deal of melon from this medium-dry wine that has a tart clean finish. It was pleasing, quite drinkable, but not at all forward. It seemed average. I didn’t think it would catch of lot of attention with the group and indeed it did not.
I read off my state choices and other folks weighed in with their ideas as well. Some well reasoned ideas were put forth while others hung back to see what occurred. As we unveiled the order of Idaho, Ohio, New York and New Hampshire emerged. As each one was unveiled I was checking my notes and sure I had gotten then right after the second one. While the mere fact I knew the states involved gave me some constraints, in the end the only one that really distinguished itself was the Six Mile Creek selection. 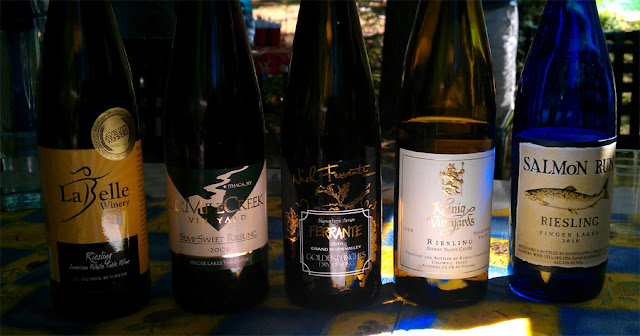 ( red them in order right to left, sorry )
As we cleaned up and shifted gears I brought out a bottle of my own 2010 South African Chenin Blanc and the first taste of our 2011 Orange Vanilla Mead. The Chenin is a light drinking wine, but isn't developing much of any character. Mixing the recently strained mead with a little simple syrup allowed me to test the desired sweetness level on a pretty diverse group. I have three gallons to bottle and I hadn’t yet worked up the proportions. I took a couple folks down to see the wine in the cellar and broke out a bottle of cider. Swigs all around and discussions of what needed to be grilled enused. 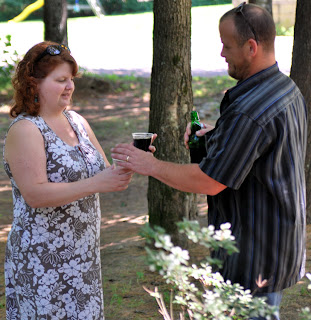 Dinner which was served with four different homemade beers, a bottle of 2008 homemade Amarone and a good deal of laughs. Margot's first Stout (being poured in the picture to the right) this year is one of our best beers ever and the Orange Wit is much improved over last year. I love the citrus and herb flavors from the hopped pale ale I made, but it surely is an acquired taste. The brown ale is good, but not super exciting.
The 2008 Amaraone is one of my very best wines as well. The juice came to me in pristine condition and every worked right through to the aging of it! It tasted so good with the burger, I was very disappointed when both were gone! The wine has developed a good deal of flavor concentration and the manageable oak has left it fresh. 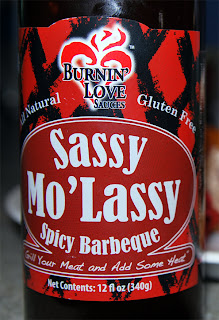 My simple beef burger seasoned with Montreal Steak Seasoning was a huge hit. I had prepared a gourmet style burger idea for folks to try. I added sharp cheddar cheese, sautéed onions and “Sassy Mo'Lassy” BBQ sauce from “Burnin' Love Sauces” that I got at the Dewey Square Farm Market in Boston. I’ve got to say that the amount of flavor in the burgers was much bigger than most I have made in the past. I saw a lot of smiles. The Italian-style chicken sausages from Sams got a lot of attention as well.
After diner we set out the desserts and I poured from the first bottle of the 2011Limoncello. I got the balance better this year and the kick the stuff offers gave a few people a nice ride! It was ice cold and very refreshing after the gluttony that preceded it.
By the time the day was done we had celebrated the Summer of Riesling with four different selections, tasted some local wines and drank several styles of homemade wines, beers, cider, limoncello and mead. Not bad!
How was your last summer party? I only ask because I know most of you weren't here...
Cheers!

I love this paper bag line up tasting idea! This must have been such a fun get together. I am now tempted to try this as well. Being obsessed with fruit wine, I'm thinking I need to do this with NH fruit wines such as strawberry (off the top of my head, I can already think of 3 NH wineries that make one). Kudos to you for correctly identifying all your Rieslings- impressive!