One Day in Maine – Scavenger Hunt in Portland

Our one-day trip to Maine was a summer vacation for the two of us, but as noted in the lead-off post it did have several underlying purposes. We had several missions on the trip, and something specific at each location. We didn’t complete our Portland mission. We were unable to find a Riesling wine made in Maine, but we did accomplish the other items, including having beers at Sebago, getting a birthday present for my Dad, exploring more of the Old Port area and otherwise enjoying our time in the shops and on the streets with all the tourists.
I’ve done a little research on the wine and it turns out that at least two Maine wineries do make a Riesling making my search pretty specific. Cellar Door is one of them and their Viognier was a bottle I brought home to try. It appears I can order their wines online and may just do that to get some of the Riesling in hand to finish my Summer of Riesling party. Bar Harbor Winery is the other Maine producer of Riesling, but as far as I can tell I’d have to go there, or near, to get it. 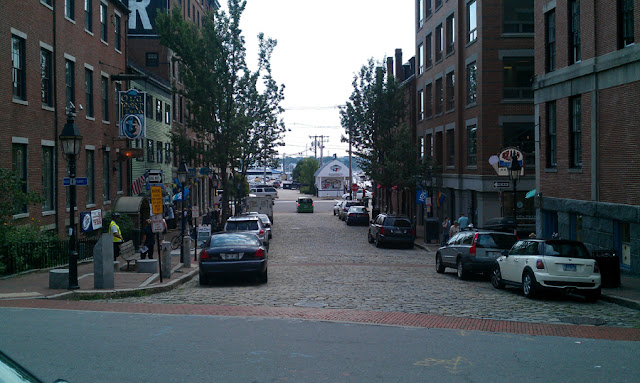 Portland’s Old Port area spreads out over a tightly packed set of streets adjacent to the ferry terminal and fish docks. We’ve been in the area several times for a ferry trip to Peak’s Island so we had some expectations from poking around on those trips. I made the wine the primary task and we set out to Maine Beer & Beverage to see what we could find. We did find a number of wines made in Maine with a significant number of ciders and meads in the mix. The majority of the wines are fruit based or made from hybrid grapes, which is not surprising at all given the climate. Unfortunately many of the bottles lookws like they might have been there some time and I wasn’t that interested in taking much chance on styles I hadn’t come for. I did pickup a bottle of Kenebec Hard Cider (Winthrop, ME) which I look forward to trying soon.
Maine Beer & Beverage is a store within a store, inside the Public Market House, and to get there you have to pass the cheese cases, including one with just cheese from Maine in it. The Buy Local sticker in the inside of that case pretty much sums up our plan for the day. We didn’t buy any cheese on the count of the huge breakfast and the day still being early. 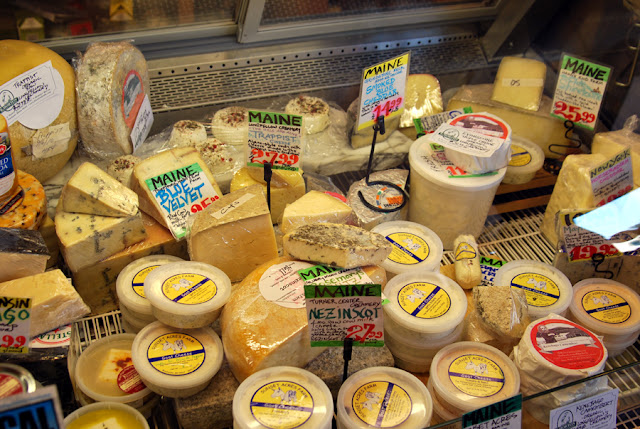 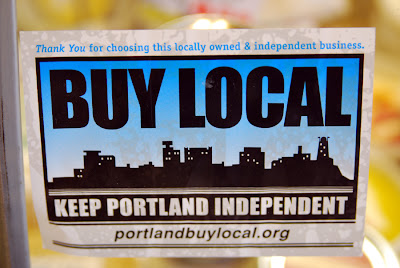 From there we walked back down to Fore Street and wandered in and out of shops. We checked out Cool As a Moose, Life is Good, City Beverage, Maine’s Pantry and several others. We also walked out towards the docks and checked out the wares at the Harbor Fish Market. 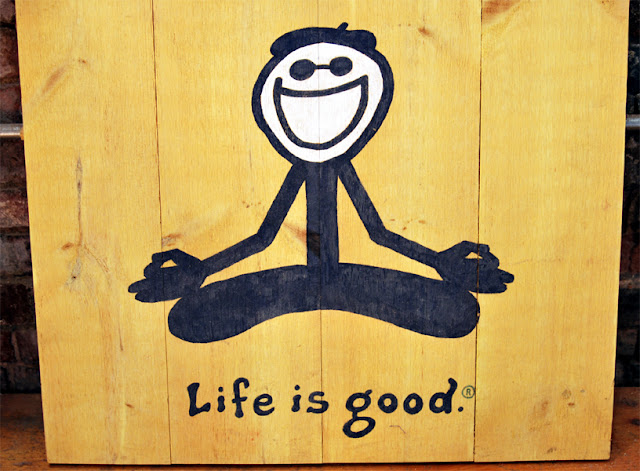 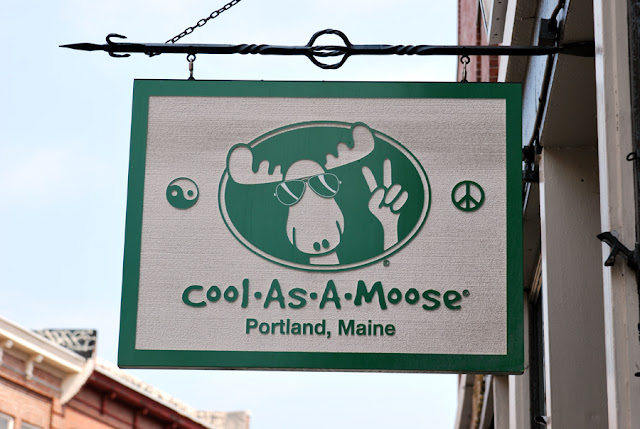 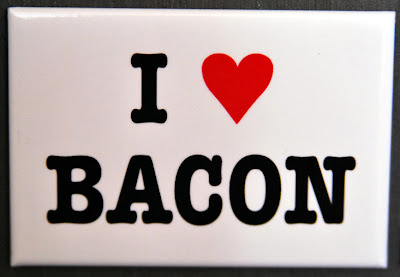 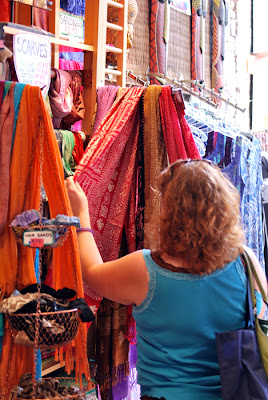 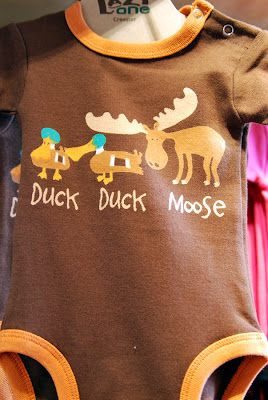 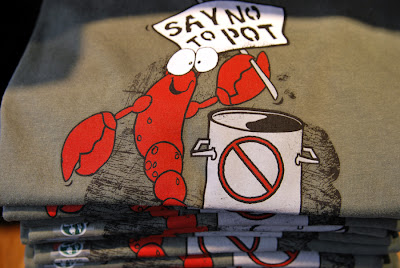 Our last retail stop was at Downeast Beverage where I found the Cellar Door Viognier which is made in Lincolnville, ME. We also picked up a bottle of blueberry soda and some local pickles. The blueberry soda was pretty damned interesting. I’ve had peach, grape and cherry sodas from the South that really make the fruit flavors sing, and I’d say that Bar Harbor Soda got the same punch of out the berries for this soda. It was refreshing on a rapidly warming day, and so Maine! 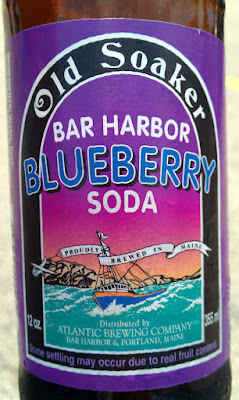 The fresh fish at the Harbor Fish Market looked like it would be well worth the trip! 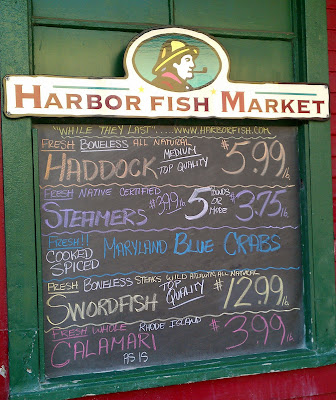 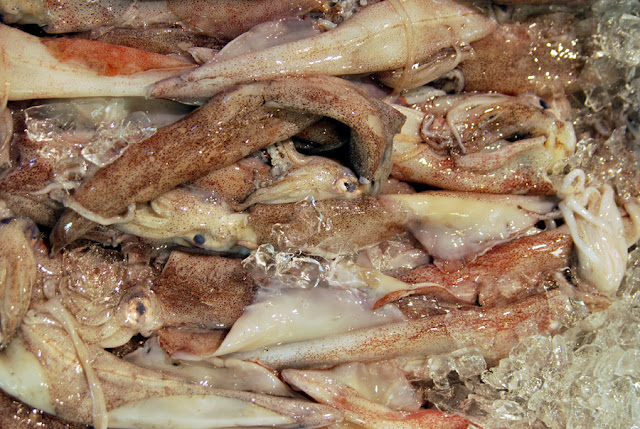 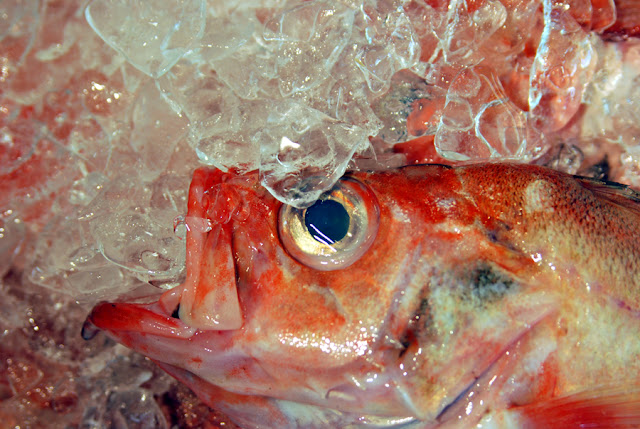 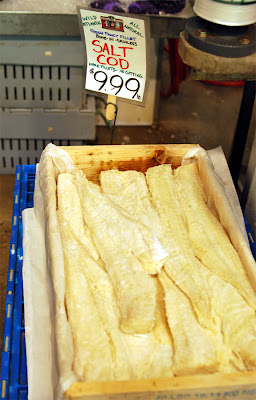 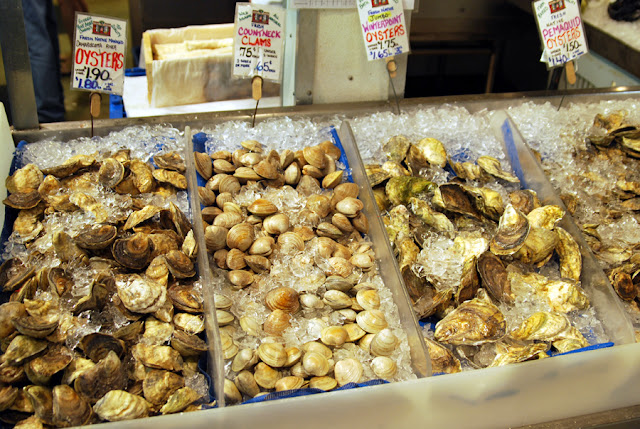 Our final stop in Portland was intended to be a relaxing one, and one with a bit of refreshment available. Sebago Brewing just recently moved to the corner of Fore and Franklin with floor to ceiling windows on both sides of the corner, and seasonal outdoor seating. It is a beautiful space with lots of light and will likely quickly become a pretty popular space. We decided on the beer sampler and some pub pretzels for what would be lunch on our already food-filled day. 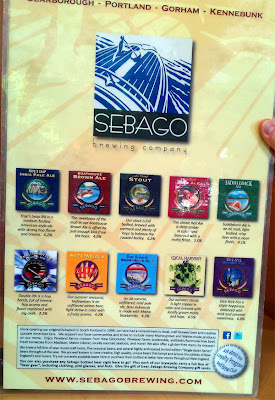 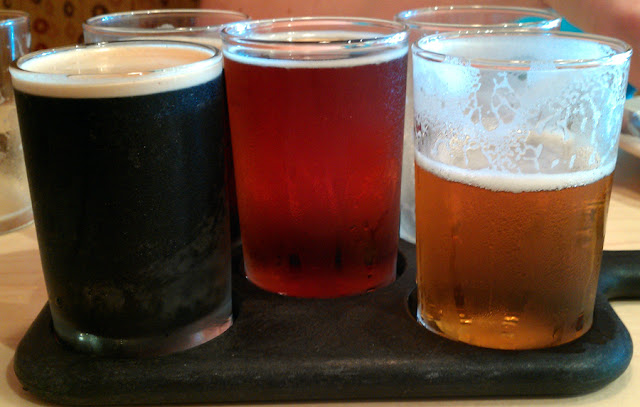 Our favorites were the Frye’s Leap IPA and the Lake Trout Stout. I’ve enjoyed IPA several times before and really was taken again with the huge and pleasing hop aromas of this beer. Margot gave the stout the once over as is typical these days. Both of us found lots of chocolate and roasted nut aromas and flavors.
I spotted a huge jug on the back bar with what looked like and drink being made. It turned out to be a watermelon sangria, which Margot ordered to give it a refreshment test on a warm summer day. Margot told me that it was sweet, but not sickeningly so, with flavors of clove. She added that the chunks of watermelon were very tasty and overall the drink was very refreshing. 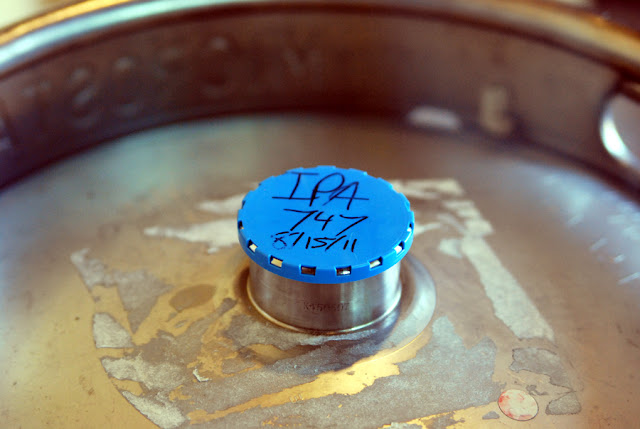 I finished with the Grand Cru, a blend of their Bourbon Barrel Aged Full Throttle Double IPA, Barleywine, and fresh Frye's Leap IPA, which is served in one size and in a tulip type glass. The nose is huge on this beer with fruit, baked goods and spices. In the mouth it is moderately malty, hoppy and just a bit sweet. Some coconut tumbled through in a few of my sips. I almost ordered a growler to go, but remembered I needed to save my $$ for my remaining missions! 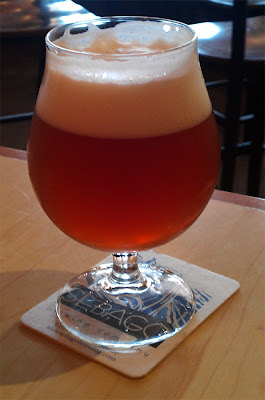 In my next post I will share the blueberry search from the North Berwick Farmer’s Market.
Cheers!
Jason
Posted by Jason Phelps at 10:00 AM