One of my action items from #WBC11 was to get more local. As I said in my post where I outlined my action items from the conference, I’m no stranger to what is made in my own backyard, but I realized I could be more familiar with my local beverage producers and products. More of a local focus is also likely to be more rewarding because, at least in my area, the stories are just beginning to be told and the writing and networking space isn’t as crowded.

I know I’ve been to the space that is now Milly’s Tavern since I started going out in Manchester, but only when it was the Stark Mill Brewery which would make that 2001 or before. Margot works right down the street now so meeting up for lunch at Milly’s makes for a convenient and a worthy food and beverage adventure.
Milly’s is located in what used to be a mill building along the Merrimack River in downtown Manchester, NH. It is Manchester’s only micro-brewery (there are many others state-wide) and popular night-time destination in the city. Milly’s has at least twelve beers on tap anytime you stop in. With eight all year round offerings and at least four seasonal beers, there is definitely plenty to try no matter when you go. Milly’s also is a full service restaurant with a diverse roster of pub-style fare and a special Sunday brunch menu.
Margot and I planned our lunch as a fun change of pace for a mid-week workday. We expected to have quick bite and check out a beer sampler, but we got much more than that. And wearing my Beer Advocate t-shirt was the key. 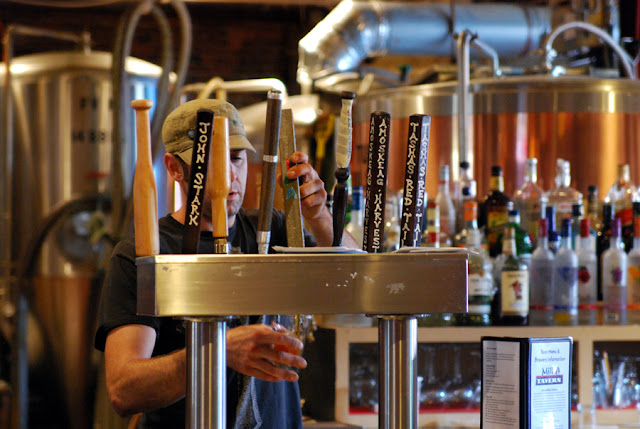 ( Steve - Brewer, DJ, handyman, server and a great story teller! )
The restaurant wasn’t busy, not a big surprise for a Wednesday at lunch, so we were seated quickly and began perusing the menu. Before I could ask about the beers Steve Souza, the Assistant Brewer, came over and introduced himself. Jackpot! I love talking to other beer and winemakers about how much they love what they do. Steve walked through the beer menu explaining the styles of each of the selections so I could best decide which 6 I should try. I lined up the Mt. Uncanoonuc Golden Cream Ale, Manch-Vegas I.P.A, Bo’s Scotch Ale, Van Otis Chocolate Porter, Milly’s Oatmeal Stout and the General John Stark Dark Porter for my sampler. Steve headed back to the bar to pour my sample and returned with beers in hand and stories to share. Thanks, Steve!
It turns out that Steve and his current role as the Assistant Brewer are a pairing of luck. Steve had been a prior patron of Milly’s, has been and still does some of the DJ’ing for events, does some handyman & other work for the tavern and has always enjoyed their beers. So when the opening for the job came up Steve was close at hand to express his interest. His mandate, learn to brew Milly’s beer. Some people who want to get into commercial brewing after doing it at home for some time might have trouble with this very specific request. Not so for Steve who likes Milly’s classic beers and thought nothing of learning to brew them to someone else’s recipe and standards. He now brews these beers one to two times per week on their 15 barrel system, and has been pouring over the aging brewing records and recipes looking for the originals that helped the tavern build the base of loyal customers they have today.
Margot and I also ordered lunch, with me opting for the pizza on special that day. The pizza was a simple flatbread pizza with chicken, BBQ sauce, red onions and lots of cheese. It might have been simple, but it came to the table hot, tasted great and was a great match for the beers. I’d have to stop in more often to be more authoritative on the food, but I’d bet you’d get the same treatment I did and even when they were busy. 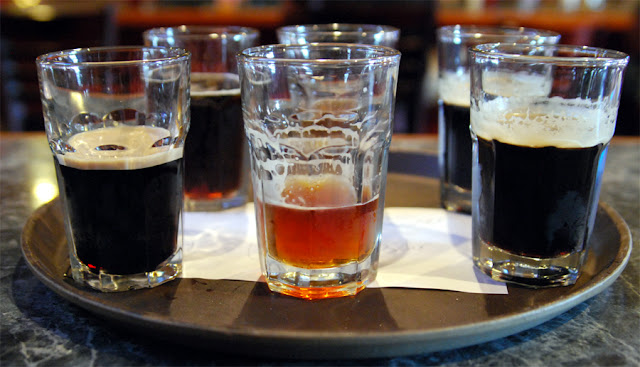 ( A beer sampler is never a bad thing! )
The Mt. U Cream Ale is a light, golden colored beer with hints of malt and hops in the nose and on the palate. It is crisp with subtle hints of butter and lightly creamy texture. I’ve only had a few Cream Ales in my experience and this beer is lighter than the most notable, but had a clean-ness in the flavors that speaks to care in its crafting, so I’d put it up there in quality.
I asked Steve if he has observed any improvements in the beers since his transition into the job (the prior regime had left some problems behind) and his focus on the original recipes and process. He acknowledged there have been some noticeable changes and the most rewarding indication of them has been that several regulars have confirmed that the newer versions of the beers like the IPA and Oatmeal Stout are back in line with what they had grown to love from the early days. Well done indeed!
Up next was the Manch-Vegas I.P.A. I love hoppy beers and this beer offered me lots to consider in the nose. The complexity wasn’t surprising so much as it made me stop and savor it.  The beer has the typical richness in the body, but it isn’t sweet and transitions to a bitter hop finish without effort. I’ll be back for this beer!
I moved on to the Bo’s Scotch Ale from there. Steve explained that some of the beers with large grain bills (lots of grains or non-beer geeks) are used in a second run with the spend grains and additions to produce another beer. In the case of the Scotch Ale its grains were made into a second run that was used to produce the New Hampshire Honey Brown. Milly’s web site describes some of their measures to mitigate their environmental footprint which includes giving the spent grains to a local farmer for feed. If you can make two beers from them AND feed local livestock I’d say you got your money’s worth! This beer has malty & sweet aromas with a bit of wood smoke thrown in. The body and flavors were complex like whiskey with a long flavorful finish. 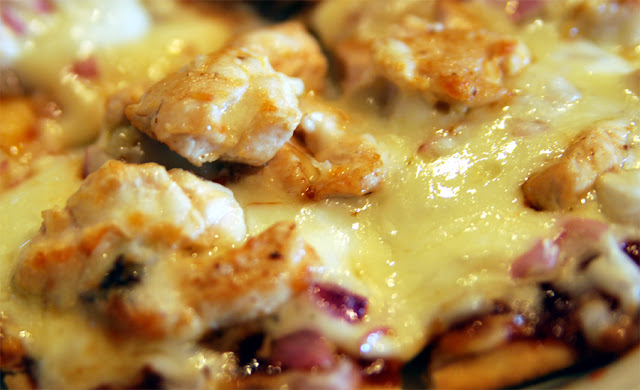 ( My pizza which was a well made match for the maltier, smokier beers in my sampler. )
I asked Steve how hard he would have laughed if someone had told him he would be a brewer at Milly’s a few years back. He chuckled and agreed it would have been a wild joke and not a bet he would have made. Stating that he has always found himself “doing something else” at various points in his life he sees now that this new job makes sense. He also noted that knowing the crew at Milly’s already made taking the job a slam dunk because it really is a family atmosphere at Milly’s.


The Van Otis Chocolate Porter was up next. I asked about brewing with chocolate because we had plans to do this pretty soon ourselves. Steve said it sucks and it makes a mess of everything. I had figured as much and hoped we wouldn’t run into too much trouble! The biggest thing I can say about this beer is that Margot and I picked up a dusty cocoa nib flavor and texture from the first sip on. For full disclosure and so I don’t get crap, Margot attached the description to the flavor that I humbly described and dusty chocolate powder. Steve agreed and was noticeablely happy that we described it that way. The beer is not as bold as I was expecting for a Porter, but it was very pleasant and had a dry finish which was unusual to me.

The Oatmeal Stout came up next. Margot has pretty much determined that the measure of a brewery is what they do with a standard Stout so I let her have first dibs. Her approval gave me something to look forward to. The aroma of oats comes through just a bit with a restrained amount of creaminess typically from that ingredient as well. It is light in body, as a basic Stout should be, with a mild bitter finish and hop notes on the way out. This is a solid performer and a beer that would bring me back for sure.
The last beer in my sample was the John Stark Dark Porter. I found this beer to be spot on for the style. The smokiness I expected was a bit delayed in arriving but stays on through the finish so on balance, it works. It has the boldness in the nose and on the palate that you might expect. The malty richness in the mouth made for a great finish to my sampling of Milly’s beers, but I wasn’t done.
I asked Steve if he sees a lot of craft beer fans and home brewers at the bar. He said he meets a fair bit of both and always loves when he can spend a few minutes with someone who knows beers and wants to get to know the ones he makes better. His quote was that he knows that “many home brewers would kill for the job” when I asked about the feedback he gets from some of the fans. And he’s right.
Steve thought there were two other beers I should try before I took off. See what my pursuits do? First up was the Pumpkin Ale, from an out of season batch if I recall, which I found to have layers of spices and a “meaty” flavor that I was guessing came from the squash. The final beer was the Tasha’s Red Ale. To be fair I will say that for some reason Red Ales don’t excite me much so I don’t order them. This beer was solid with a balanced nose of malt and hops with the hop aromas and flavors coming through nicely along the finish. Because the style doesn’t particularly excite me I might not order this beer, but I wouldn’t discourage anyone from trying it because it tasted like a well made beer and had no detracting attributes.
The standouts for me were the John Stark Porter, Manch-Vegas I.P.A and the Oatmeal Stout. In those three I found rich aromas, well defined flavors and great balance. I am looking forward to visiting Milly’s in the coming months for the seasonal brews. The service at Milly’s was excellent and the food was well prepared making Milly’s a great addition for your next gastro-adventure.
Where do you go to enjoy your local drinks?
Cheers!
Jason
Posted by Jason Phelps at 8:38 AM