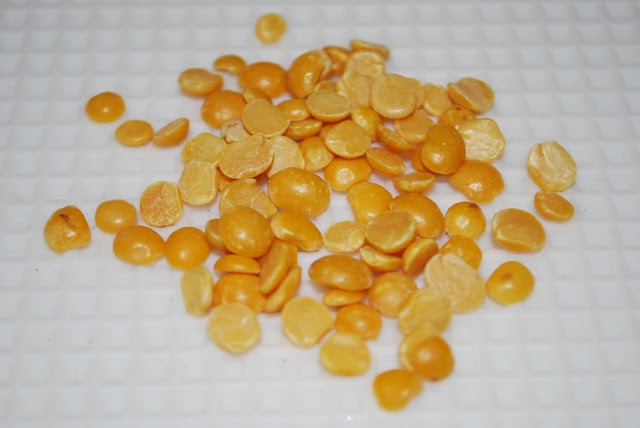 Toor Dal (split yellow pigeon peas)
The Indian word Dal (also spelled Daal and Dhal) describes the preparation of beans, lentils or peas that are dried, removed of their husks and split. From there the type of bean/lentil/pea and the method of preparation branches out in many directions. Those familiar with Indian cuisine will know that there are many regional distinctions beyond a general difference in ingredients and methods between the north and south of India.
A few years back I took a job where I met many wonderful people from India. I was under-exposed to Indian food but being food curious this didn't last long. A willingness to share their homeland's food wonders was a great privilege for me, one that I worked hard to answer with things I had learned growing up the American food culture, like Apple Pie. Back to the Dal.
I love to cook what I call Dal stews, essentially lentils cooked with aromatics and other simple ingredients like onions and tomatoes. I generally serve this dish with store-bought appetizers like Pakora or Samosa and Naan bread.
Recipes for dishes like this abound and preparing the dishes is straightforward. Trying to match the flavors to what you might find in a local Indian restaurant will be a challenge due there not being a "master" recipe, and individual cook's decisions about how much of various spices to use. I say don't both bother. Make versions at home you like and happiness will follow.
A recipe for Lentil Dal from Itsy Bitsy Foodies was featured in the FoodBuzz Top 9 today. This recipe is a very straightforward preparation and a great framework and starting point to experiment if you choose. Check it out at http://www.foodbuzz.com/recipes/2214277-lentil-dal.
I have tried several enhancements to recipes similar to the feature including adding onions sautéed in butter with turmeric and cumin seeds after the lentils are finished cooking. I have also added cilantro paste, bought in a container in the grocery store, a few minutes before the end of the cooking to add some flavor without having to find or use fresh cilantro leaves.
In a recurring column named The Minimalist in the New York Times Mark Bittman writes on food and beverage topics. In an article from January 2010 he wrote about this same topic with good background and lots of ideas for the curious home cook to tackle. Check the article out at http://www.nytimes.com/2010/01/06/dining/06mini.html?ref=dining.
In particular I found the definition of the enhancement I described above, called a tarka, a nice validation of the things I had learned first hand as I have come to know how these dishes are made.
If you are lucky enough to have an Indian market nearby you can find all of the ingredients you might use in a dish like this as well as sides, appetizers and chutneys to serve along with it. In the same store bread is also worth exploring. Naan is the most well known type where I live. There are other styles, several of which are layers of bread with seasoned vegetables and onions in between, that are definitely worth a look.
Wikipedia has a nice article on Dal and lists some of the names of the other commonly found legumes that form the basis of this type of dish. http://en.wikipedia.org/wiki/Dal. 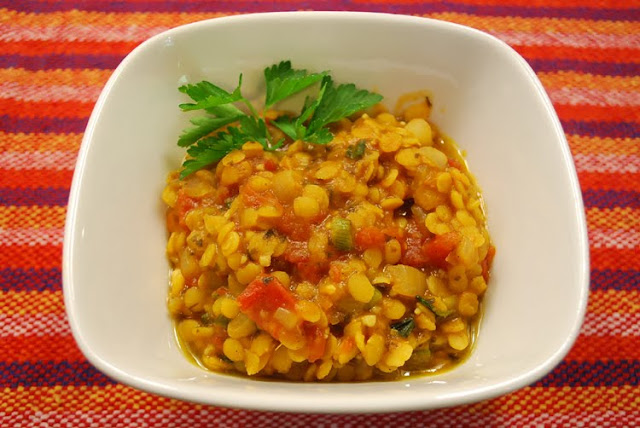 The picture above is my version made today. I used the FoodBuzz recipe as a guide and experimented with some changes. I used vegetable stock instead of water, substituted diced tomatoes for the tomato paste and added green chilies and cilantro paste with the tomatoes. For the cumin and coriander I used seeds and gently crushed them together with my mortar & pestle to ensure good aroma and flavor extraction. I finished it with a tarka of green onions, butter, lemon zest and curry powder.
A note on curry powder. This is strictly a facet of the western world. It was created for the British who got used to Indian flavors and then moved elsewhere. It is not something a native Indian will use. The blends of spices used in Indian food may be similar to this but are more often totally different, and that is what makes Indian cuisine so interesting. Using curry powder from the grocery store is a good way to harness flavors you are used to and I still use it from time to time. More often I used the base spices in different combinations depending on what ingredients are in a dish.
With food and beverage pairing constantly on my mind here are my ideas of how to pair with a dish like this. The dish is not overly spicy, although you can make it this way if you like, so the standard off-dry wine may not be necessary here. I am actually going to suggest a medium-dry rosé served cold. If rosé is not your thing or not to be found then a Riesling or Gewurztraminer will pair nicely with this dish and anything served alongside. If spicy sides accompany this dish then definitely go for something with a little sweetness to balance the heat. A hibiscus tea with a touch of sugar will also pair well. If you have time make and chill the tea ahead.
My wife and I love Indian food and continue to experiment with different dishes and methods and enjoying many dinners along the way.
Cheers!
--Jason
Posted by Jason Phelps at 12:26 PM