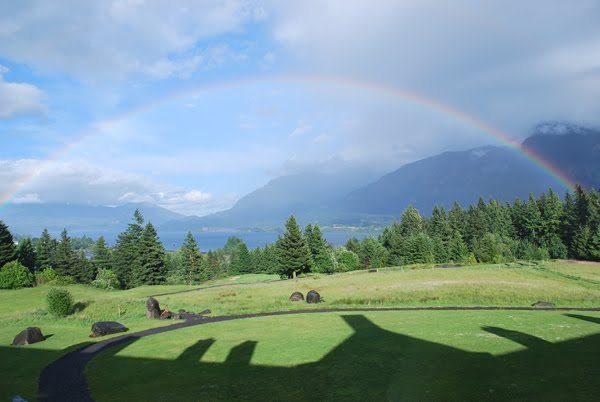 (Skamania Lodge, Stevenon Washington)
The third annual WineMaker Magazine Conference was held in Stevenson Washington from May 20th to the 22nd, 2010. Over 400 amateur and small winery winemakers assembled at the Skamania Lodge in the beautiful Columbia River Gorge area for 3 days of education, networking, wine tasting and fun.
The format of the conference contains seminars and panels during the day including topics such as Testing for pH, Country (Fruit) Winemaking, Vineyard Management and Award Winning Tips from Past Winners. Two full days for sure. Each day there were keynote addresses over lunch and a wine evaluation seminar in the mid-afternoon. Attendees were obliged to bring wine to share at meals and of course to meet your fellow attendees, swap tips and have fun.

I chose a program focused on lab testing including for SO2 (Sulfite), pH, Total Acidity and Malolactic Fermentation. These measurements will all be a key part of the new batch of wines I will start this month.

In addition I sat in on seminars for Adjusting Wine Must Before Fermentation, Award Winning Tips, Yeast Nutrition and Improving Wine During Aging. After two days my head was spinning from all of the information I was soaking in, but with some good notes taken down I will be prepared to leverage what I have learned immediately,

One of the most interesting seminars was on entitled Same Grape, Different Yeast hosted by Sigrid Gertsen-Briand from Lallemand, a maker of wine yeasts, enzymes and yeast nutrients. During the seminar we were introduced to four white wines and two red wines, each from the same starting batch of wine infused with different strains of yeast. The goal of the seminar was to see firsthand through an evaluation of these wines how the yeast selection affected the end result. We were encouraged to evaluate the wines for color, clarity, aroma and taste as well as blend them to better understand how the individual components might be better together. The white wines where from the Chardonnay grape and at the table I was sitting the highlight was the blend of sample #2 with sample #4. The result was a well balanced smooth Chardonnay with pleasurable aromas, good flavors and a medium finish. How cool!

The first night was the swap meet. Right off I am going to be clear that I saw more open bottles of wine at the swap meet than I had anywhere else before. Risking damage during transit, Margot and I brought three bottles of our wine to share, a 2009 Strawberry, 2009 Chateau du Roi (CDP from a kit) and the 2010 Symphony. We dropped the CDP on the swap table and plucked a Cab Franc up to open. I have to admit that I don’t recall (and didn’t capture) the maker of the wine or my impressions. I was having too much fun. We opened our Strawberry at the table and then shared it around with some of the folks we met earlier in the day. The feedback was a great honor. Those of you who have had it know it well and the reaction here was much the same. The bottle was empty not long after it was opened. I went on that night to try upwards of 20 wines from all over the country made from a range of grapes and fruits. Some Merlot from PA, Zinfandel from CA, Cab Franc from WA and the list goes on. Not everything I had was to my liking, but when considering the enthusiasm with which they were poured and the camaraderie this event offered my detailed evaluation is not important. I had the very last sip of a 1982 homemade Merlot. It was showing some age but was drinkable and a treat to try. We were having fun and everyone I met, like myself, acknowledged that they were there to learn how to do it better. Some of the local commercial wineries and amateur winemaking clubs were also pouring their wines. 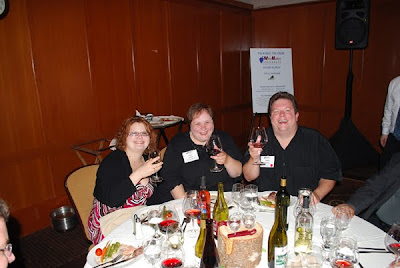 (Margot and Kelly & Robbie Rogers from NC)
The second night was the closing of the conference which was capped off by the competition awards dinner. Between Margot and I we had entered fifteen wines and hoped for some luck again this year with the judging. Boy did we end up surprised! We sat at a table with folks from NY, NJ, NC and a local winemaker from MA, Noel Powell, who I had corresponded with via the web prior to the conference. In all our table took home 12 medals , a nice concentration that got us some attention for sure. The big joke was the fact that my name got called nine times! “And once again from Londonderry New Hampshire, Jason Phelps” was how it went for the last two. The recognition was amazing and fellow attendees stopped by as we were packing up from dinner to congratulate me. So many people offered their kind words of support, and thanks for tips and encouragement I had offered to them over the two days. I felt like a rock star. Rex & Barbara from CA were the big winners taking the winemaker of the year award for the third time, something I was surely a runner up for. A true honor indeed. I personally congratulated both of them and let them know we hoped to see them again next year. With some of his tips in hand, he presented on the awards winning tips panel, we plan on giving them a serious run for the top award the next time around. 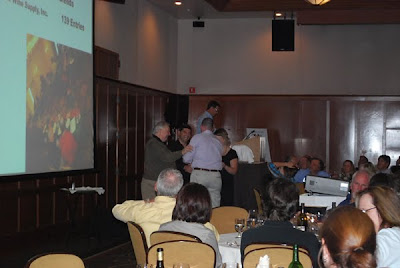 (Heading to the Podium!) 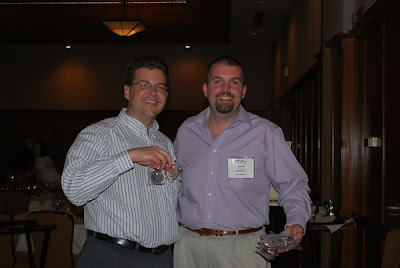 (Noel & Jason Representing for New England!)
On Sunday morning we enjoyed the deluxe Champagne Brunch at Skamania and headed off to Portland and ultimately Seattle. The next few blog postings will contain wine reviews for Washington, Oregon, winery visits to Chateau Ste Michelle & Columbia Winery and dining and drinking reviews for Seattle. Don’t touch that dial!