(This sign hangs over the island in the kitchen in Vermont. You have to visit to know the truth...)
In April when my parents, Margot and I were at our place in Vermont we were talking about the menu for Vermont house cleanup and summer kick-off weekend, from which we just returned. My mother mentioned she had a pork roast she wanted to use and Margot reminded me of the Food TV show on which we saw a recipe for slow cooked pork with Coca-Cola mentioned. My mother and I collaborated on the plan where she would bring the roast and side dishes and I would bring a dry rub to prep the roast with, the complete recipe and a willingness to pull it off.
When we arrived on Friday night I defrosted the pork and applied the rub. The recipe for the rub was posted on Foodbuzz earlier in the week. You can pick it up at http://www.foodbuzz.com/recipes/2255787-sweet-smoky-dry-rub.


At about 8:30 the next morning we sliced two onions, placed them in the slow cooker and put the roast on top. Any of the rub was scraped off the plate and dumped in the cooker. More flavor, more better! We then added one 12 oz can of original Coca-Cola, 1 cup of chicken broth and 1 tsp of liquid smoke and turned the cooker on to high.
After two hours we flipped the roast and turned the cooker down to low. For five hours we could smell the roast cooking and were sure we were on to something. In the early afternoon the roase was flipped again. After the five hours we turned the cooker back up to high with the expectation of serving dinner three hours later.
At 5:30 PM I took the roast out and placed it in a roasting pan covered with foil and set it in a 250 degree oven. I removed the onions from the cooker and placed them in a sauté pan with 2 Tbsp of melted butter over medium heat. The onions slowly cooked for 45 minutes and were perfectly caramelized.
The cooking juices from the slow cooker were added to a stock pot and set on medium-high heat. I added
We also grilled some split heads of romaine lettuce drizzled with olive oil and a vegetable seasoning blend. When everything was ready we cut the pork down, it didn't need much, and served it with the onions, BBQ sauce, grilled romaine, cole slaw and potato salad. The picture you have all been waiting for is below. 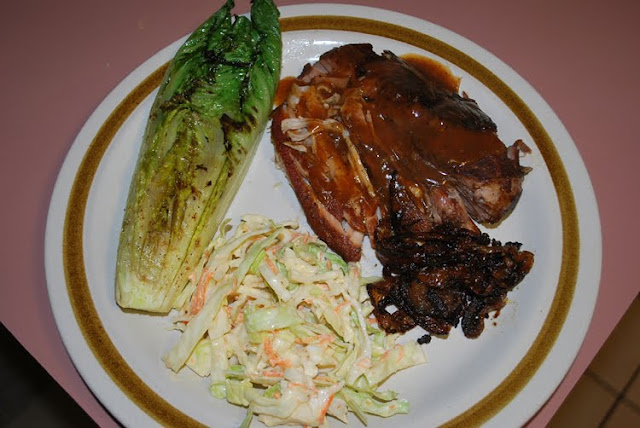 This recipe came out better than I had expected. We paired it with a 2005 Merlot from our Ancient Fire homemade wines, a wine that was purposely left to age this long to see whether it would last. And it did. It was showing some age, but was still very drinkable. The pairing with the sweet & smoky pork was right on. I also tried it with a 2008 Shiraz, also homemade, and although the wine was fruit-forward and spicy I felt it overwhelmed the dish.

As we at the comments about the meal we were flying fast & furious. Here are a couple to give you an idea of the enthusiasm.

Mom - "That dinner would rival any BBQ dinner you would get in the Big Easy!"

Dad - "When you do pulled pork dinner, make sure you aren't a beginner."

Margot - "I love you, I love you. I feel sad for women whose husbands like sports."

I didn't really know what to say other than it was damn good and I would make it again any day.