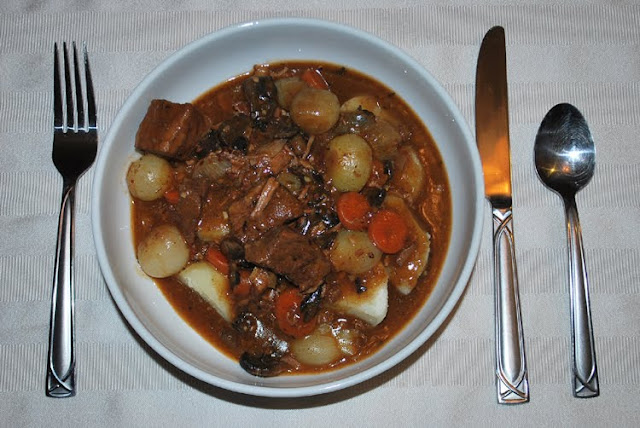 This post describes my experience of making Beef Bourgogne from Mastering the Art of French Cooking Volume 1.

One point of clarification. I did see the movie Julie & Julia and thought it was pretty good, although the story about Julia Child's life is what I liked most. I am certainly not embarking on a quest to make all the recipes in her first book.

I made this specific recipe because I wanted to make a dish that I could pair with a good bottle of Burgundy. I needed the savory flavors and the earthiness from something like mushrooms and since this dish hails from the region, and can be made with the regions's wine, I figured it would be just what I was looking for.

Julia Child is someone I recall seeing on TV when I was a child. Her shows aired on WGBH out of Boston and I lived in northern CT which picked up the station. I have always known of her and thought she was an interesting character from 20th century America. For a brief time when I was a kid I thought of being a chef when I grew up and I am sure I would have mentioned her as a reason why. My mother and grandmother were the primary reasons and though I did not become a chef I did learn to cook well enough for it to be a passionate hobby.

This recipe has a lot of seperate steps and takes a while to make. You might not be sure it is worth it up front, but trust me it was worth every minute!

The recipe calls for a bottle of wine to simmer the beef with. I used the Louis Jadot Savigny-Les-Beaune from 2007. I tasted a bit of this wine, not one I had had previously, and found it to be focused and reserved with a good balance. The wine was a deep red color but allowed light through, almost to showcase the color and clarity. The finish was long and smooth and the teeth drying effect from the tannins was there but not real strong. Because I was cooking with it I didn't let it breathe so my evaluation may have been arbitrarily short. I didn't feel I got a good read on the aromas and flavors during this brief tasting.

I am not a big fan of mushrooms and the more reading I do the more I think I am going to have to get over this. Mushrooms are found in many dishes and the wine pairing reccomendations involve integrating with the flavors mushrooms are known for. With a pound of crimini mushrooms in this dish I wasn't going to be able to avoid them. I was hoping the wine was going to help me here.

Oprah's web site has a reprint of the recipe from the book for those who want to see what is involved. http://www.oprah.com/food/Boeuf-Bourguignon

The most intense part of the effort was browning the beef, everything else was pretty easy. A friend of mine did confirm that following the recipe as closely as possible would increase chances of happiness. Once the beef and liquid made it to the oven I was able to switch gears to something else. As the recipe suggests I prepared the onions and mushrooms while the beef was cooking.

The aroma from the oven once the beef got to a constant simmer was incredible. I was pretty sure I was in for a treat. I chose to serve it over boiled potatoes rather than egg noodles, which I hoped would be a nice twist. I also made some crusty white bread topped with a little butter which worked well to soak up the sauce.

I paired the Domaine Pierre Gelin Gevrey-Chambertin 2006 with the meal. This is another wine I had not had previously and was eagerly anticipating. I did decant this wine one hour ahead of time to give it some breathing time and ensure that the temperature was right. The wine struck me as more subtle than the American wines I am used to. I am finishing it as I write this. The color is ruby-red but also allows light through to accent the clarity. The aromas hint at black cherry and wood. The flavors are again restrained and balanced and while they don't overwhelm they come off as a bit spicy. The tannins are mild which speaks of a good balance. The finish on this wine is also long and smooth like the earlier selection. I selected this wine based on availability and had not checked the winery web site before hand. I looked at it while I wrote this post and in a true twist of fate the winery suggests that this particular vintage would be a good match with Burgundy Beef. I got lucky on that and it worked!

The wine played off of all the key ingredients including the mushrooms. I ate all of them in my dish. I tried them in combinations with the beef, the onions and all together with and without the wine. While I still think the flavors inherent in mushrooms are what I don't like, I can see how they bring some dishes together.

From the first bite to the last I savored all of my planning and hard work. Cooking can take many forms and I won't be spending this much time (or money!) on dinner every night. I have a much keener appreciation for anyone who spends their days in a kitchen at home or for work. Hopefully they get to enjoy the fruits of their labor as I have.