I am happy to introduce Margot as new contributor to the Ancient Fire Wine Blog. She has been a regular character in the adventures, but generally just a hungry and thirsty participant and a silent editing partner. Silence no more! Take it away Margot.

http://www.thepurplecafe.com/
There are times in your life that you know you have just experienced “The Best”. We do not know when they are coming most of the time but when those moments happen it is like fireworks and neon signs blinking to alert us to them. Heck, Food TV has even built a show around this called “The Best Thing I Ever Ate”. Prior to our trip to the Pacific Northwest Jay and I saw the episode about pizza. At the time I was firmly on the side of those “celebrity” chefs that chose the traditional style pizza: thin crust, good tomato sauce and mozzarella. I was a pizza purest. Sure I had my fair share of fancy toppings and sauces but in the end I thought that the title of “The Best” should go to the Old School style….. Then, on our trip….
We were in Woodinville, a Washington town known for the huge amount of wineries and wine tasting rooms that lined the streets. After touring and doing a private tasting at Chateau St. Michelle and then hitting the Columbia Winery tasting room, we were hungry. Not knowing where to head I asked the woman doing our tasting where she would go for a snack. She immediately said “The Purple Café”. Taking her suggestion we headed out to get a quick bite, nothing fancy, just something to get us through till dinner.
Pulling into the strip mall the outside of this place is much understated. The interior was quaint with three of walls consisting of shelves filled with wine bottles (much to Jay’s delight). Our food order consisted of the following: scallops wrapped in bacon and the Parma Prosciutto Pizza. Hoping to pair a wine that went well with both selections Jay suggested I order a gewürztraminer, named Sleight of Hand “The Magician” from the Columbia Valley in Washington. His intuition was accurate as the wine paired well with both menu items we ordered.
The scallops wrapped in bacon came first and they were cooked perfectly. The scallops were juicy and soft, the bacon crisp, thick and salty.
Then, the pizza arrived, it looked unassuming; thin crust, piled with arugula with glimpses of the gorgonzola cheese and prosciutto peaking through. When I bit into it, ahhhhh heaven, the fireworks went off and the sign starting blinking “BEST EVER, BEST EVER”. The balance of the ingredients was perfect. I am a huge fan of mixing sweet with salty, when it is done right, and in this case it was. The crust was crispy and really allowed the toppings to play center stage. The sauce in this case was a red onion jam which was sweet and savory at the same time lending itself to pair nicely with the creamy saltiness of the gorgonzola cheese. The prosciutto was found throughout each slice, but used sparingly as to not overwhelm the rest of the flavors. Topping it with the arugula was genius, as the crisp, fresh flavor helped to enhance your experience of the rest of the flavors. 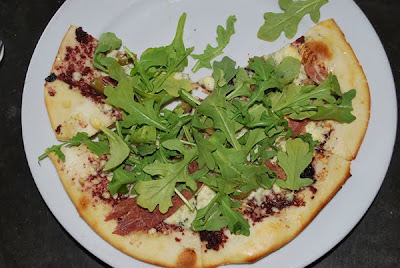 So there it is, the best pizza I ever ate, in a strip mall in Woodinville, Washington. Though I will most likely never get back there again I am thankful for being able to have that “Best Ever” moment. Never found when you are looking, but there for you to stumble upon…until the next one, memories will have to do.