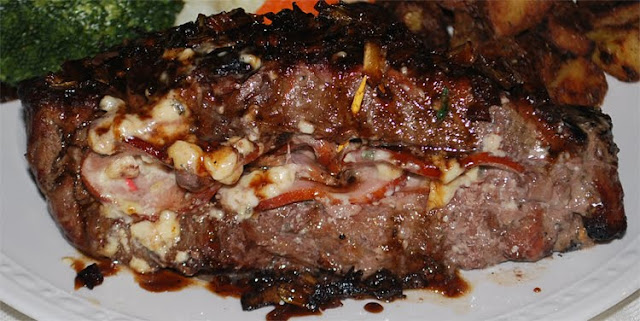 A few weeks ago I saw a post on a blog named “The Manly Housewife”. I can’t recall what the post was about, but the name of the blog certainly attracted my attention. I inquired about the mission behind the blog and found someone promoting more men in the kitchen. Preaching to the converted for sure. Without hesitation, and being a newly minted Foodbuzz Featured Publisher, I suggested we collaborate to help give something more to our respective readers.
We selected a Stuffed NY Strip to recreate based on his recent experience at the Chef Point Café in Watauga, Texas. I hadn’t heard of this place before and the description of five star dining at a gas station was certainly intriguing. The steak is stuffed with Canadian bacon and smoked cheese, served with roasted potatoes and mixed vegetables.
We decided we would each make the dish, with a couple of modifications, and pair it with both a wine and a beer and then blog about our experiences. During the initial planning we talked about anything that might need to be done differently. Additional seasoning for the steak was highlighted. We went with the addition of caramelized onions and a maple bourbon reduction to add some texture and flavor.
Margot and I cooked our meal on Sunday June 6th. I picked up two 20oz NY Strip Steaks at McKinnon’s in Salem, NH where I also found the Canadian bacon and a smoked blue cheese that I felt would go nicely in the steak.
Here are the recipes and preparation steps for everything but the vegetables, which were simply cut, steamed and served with some spray butter and a little fresh grated parmesan cheese. 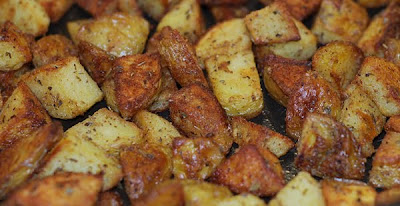 Cut the potatoes into bite sized pieces. Heat the roasting pan in a 375 oven with 2 Tbsp butter. Add spices, ½ of salt and pepper to melted butter and set pan back in oven for 2 min. Add potatoes, olive oil and return to the oven. After 10 minutes add and stir oregano. Stir every 10 minutes for a total of 45 minutes. Turn down heat to 325, add remaining salt and stir with 15-20 min. to go. 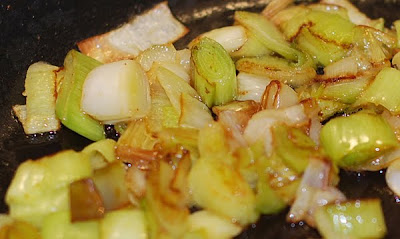 Caramelized Leeks
2 large leeks
2 Tbsp butter
Salt and pepper to taste
Wash and clean the leeks. Slice the white/light green part of the leeks ½ inch or less thick. Melt the butter in sauté pan over high heat. Add leeks. Once they are starting to brown, turn heat down to medium low. Saute, stirring occasionally for 25 minutes.
Bourbon Maple Reduction

Combine ingredients and bring to boil, reduce heat and simmer until thickened 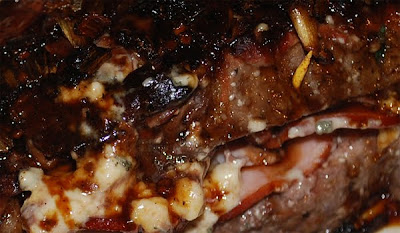 Pat steaks dry, season with salt & pepper. Grill to a good sear on both sides. Slice open back as close to fat end as possible to create a nice pocket. Stuff with bacon & cheese. Use tooth picks to secure the gaps. Wrap in foil, with the slit in meat facing up, and bake at 450 until meat temperature is 150 for a medium cooked steak. The meat will continue to cook as you unwrap and plate it.

I had never cooked a steak (intended as a single serving) as large as this, nor had I ever ordered or eaten one of this size. To truly honor this dish and make for some good pictures size mattered!

The aromas in the kitchen from the caramelized leeks and potatoes were very enticing and adding the permeations from the maple bourbon reduction got us hungry well before it was time to eat. To make sure we could separate the influence of the wine/beer from that of the food we opened both early and tried a few sips of each. When the food was served we tried the steak and potatoes without the beverages first. 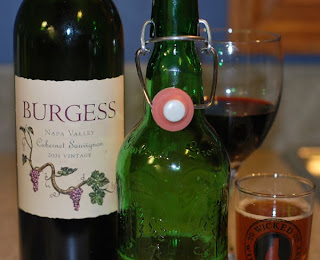 For wine I chose a Burgess 2004 Napa Cabernet and for the beer I chose a recently homemade Belgian Trappist Ale. The Cab was a sure bet with the richness of the steak and is fantastic on its own. This selection came to me as a present from a former co-worker who does indeed have good taste in wine. With a deep red color the wine had some mocha and wood flavors and had the familiar green pepper aroma. The beer was malty and hoppy with about 8% alcohol and moderate carbonation. I was hoping the malty flavors would help surround the steak in a similar way the red wine would, and that the hops would add a bit of spice to each bite.
The meat was just slightly more cooked than medium-rare, juicy and extremely flavorful. Margot said it had a wonderful crunch on the outside without being burnt, obviously from a good sear to start. The smoked meat and cheese provided a nice foundation for each bite, and the maple bourbon reduction provided a good deal of zip without being overbearing. The caramelized leeks provided additional crunch and had soaked up some butter which added a creamy texture. The potatoes included a mix of spices that intermingled well and came out wonderfully. They were crunchy on the outside and soft inside, with a hint of mustard in each bite. A very good match with the steak. These will be made again by themselves or maybe for breakfast.

The Cabernet paired exquisitely with the steak and didn’t overpower or become overwhelmed by the strong flavors in the dish. It was not a good match for the potatoes which Margot was the first to notice.
The beer on the other hand paired with both the steak and potatoes. As I had hoped the flavors in the beer surrounded the meat and cheese and played off those flavors to create a warming, exciting bite, umami I would imagine. The earthiness of the beer, an influence I believe from the Belgian Trappist yeast, paired nicely with the potatoes, much better than the wine. 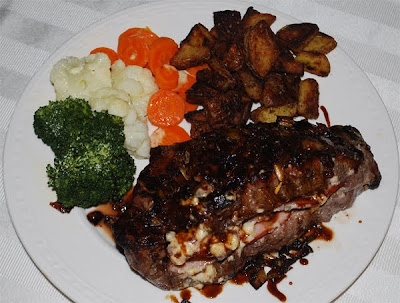 The finished masterpiece!!!
This was one of the most exciting food and wine experiences I have ever had. I haven’t focused on cooking beef too much as we don’t it as often. The method I used this time definitely helped retain the moisture, something I will do well to remember since I generally like my steak medium-well which means overcooked to many people. Researching what Canadian bacon actually was prompted me to think about making it at home. And of course collaborating with the Manly Housewife gave me opportunity to think creatively about yet another food and wine adventure.
Today I am guest posting on The Manly Housewife's blog. Be sure and check out this post over there today and check back tomorrow when the he will be our special guest cooking a similar meal here at Ancient Fire Wines.
Cheers!
--Jason
Posted by Jason Phelps at 8:58 AM

Thanks for working on this project for with. We should find other bloggers to take on more projects like this. Well done on the post and the recipe.

Now that is a manly dish. My husband would go bananas to have that dish. Just might have to make it for him. Great choice with the Burgess Cab - I bet the meal was outstanding!

Oh God, those steaks look to die for...

Kudos! I love this post. And, I love (and envy) your ability to pair wine with it. I've always been a beer guy. I think beer and wine have similar complexities but wine is like Chopin. Beer is like Motorhead. I just haven't "learned" the subtleties of wine yet.

I've been trying for a similar approach at my site. Big robust food with wine and beer recommendations. At any rate I think the recipe is awesome and I'd eat this any day of the week.

What a great meal!! Thanks for the recipe! Can't wait to get my eat on with this :)

NOM! Looks seriously tasty. Can't wait to try it. Thanks for the recipe!