This year marked the third annual Montreal pub crawl and beer quest for Margot and I. A few years before we started formally doing this we had remarked that Quebecers love their beer and celebrate it in a very local way with small brewpubs in neighborhoods all over the city. The pub crawl we created is pretty simple. I pick several pubs with Metro access and we pop in to sample their beers. Many of the pubs serve beer brewed on site, and others serve a combination of local & regional brews along with foreign imports that are not the typical that we get at home.

This year we visited Bar Barouf on St. Denis and Dieu du Ciel! on Laurier.

Our stop at Bar Barouf was random after not walking quite far enough to find Le Saint Bock, also on St. Denis. The place was almost completely full and quite noisy. This is typical for bars almost any night of the week in Montreal, but a guarantee on a Friday night. The décor is very modern and the long bar has taps along a significant portion of it. The beer selection was a combination of local brews and imports presented in European fashion by style (blanc, rouge, noir, etc.) Margot has determined she is a stout girl and requested something dark and chocolately. The St. Ambroise Noir fit that request nicely. St. Ambroise is a Montreal-based brewery that has been steadily growing since they came on the scene in the first generation of craft breweries in Quebec. The St. Ambroise brewery and brewpub are not far from the city center and will make for a great stop on a future crawl. I opted for the Grimbergen Abbey Ale. Grimbergen is an old Belgian line of beers first brewed by monks who became known for their hospitality and beers.

St. Ambroise Noire
Black in color with a huge Guinness like head.
Lots of dark chocolate flavors with a smooth finish

Our next stop was Dieu du Ciel! Dieu du Ciel! represents the new generation of Montreal craft brewers offering a range of styles and beers with unique ingredients. We are familiar with some of their beers from Montreal grocery stores, but not all of their styles make it into the bottle and sampling them fresh from the tap is ideal. 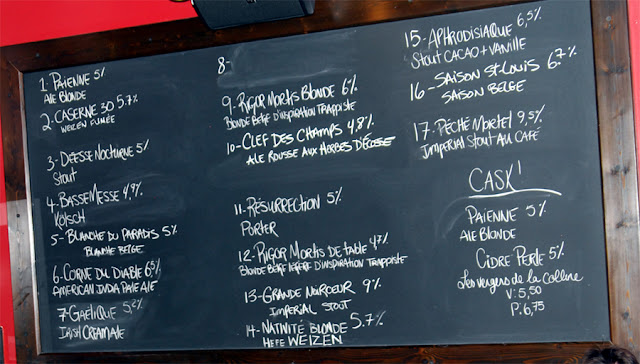 The menu in the photo above greets you when you arrive. You can’t really go wrong starting off like that! The place was jam packed with a small amount of room near the bar to stand and wait for a table to free up. The first two styles we tried were the Grande Noirceur and the Gaelique.

Grande Noirceur (Imperial Stout)
This beer had lots of roasted malt flavor in it and living up to its Imperial name, lots of alcohol. It was smooth and enjoyable but not the kind you could sit around (or not at least I) drinking all night.

Gaelique
After a long car trip, walking back and forth to the grocery store and her first beer, Margot was praying for a second wind at this point. Because of that she only offered “it’s good” for this beer. It is a red (Irish perhaps?) ale with a good deal of earthiness. It enjoyed a few sips, but didn’t pay it much mind.

A table opened up and we grabbed it as soon as we could. We queued up tastings (6 oz each) of 5 additional beers, including the Saison St. Louis, Aphrodisiaque, Clef De Champs, Resurrection and Peche Mortel.

Saison St. Louis
Gold/orange in color and not as "funky" as I would have expected. The bitterness and citrus in the body were refreshing, but I thought it was only ok.

Aphrodisiaque
This was the highlight of the visit to Dieu du Ciel for both of us. A chocolate and vanilla stout. It SO lives up to its name. The flavors are captivating and taste like the real deal. Margot suggested it tasted like real chocolate pudding, and not the fake Jello stuff. This is a beer I hope to have the opportunity to try again. There was just a hint of sweetness to make the flavors pop and shift you to a dessert frame of mind, and a good match for a chocolate dessert as the finishing course of a great meal.

Clef de Champs
I picked this beer solely from the description, a rye beer made with herbs. I picked up the aroma of cannabis while I was giving it a good smell. I am sure there were other herbs in there but that one stuck out. It was interesting and made me think of a beer pairing with salad that included field greens. I wouldn’t consider it an everyday drinker, but was a fun left field selection to throw into the mix.

Resurrection
This was listed as a porter and I was looking for that signature smokiness which I definitely found. It is very dry and black in color. My notes say “it stands up” and my vague recollection is that this beer is no slouch and demands your attention when drinking it. The hour was getting late for us and I had been putting them back for about 4 hours already so what can I say!
Our final beer while at Dieu du Ciel was the Peche Mortel, and one we were familiar with from the 6 pack we took home with us in 2010.

Peche Mortel
Black in color with pungent coffee and chocolate aromas. This is their best stout (an Imperial Coffee Stout with fair trade coffee infused into it) and a beer of uncompromised character. It is far better fresh from the tap than from the bottle, but I’ll take either whenever and wherever I can get it. The depth of the flavors and how smooth they go down is a testament to passion in the process of crafting this beer. 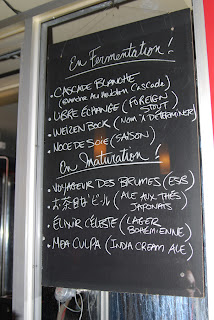 The sign above was just outside the brew room at Dieu du Ciel! What a tease, since I won’t be back soon enough to try them!

Neither of us tend to stay out very late so I buy some beers to have back at the hotel while we wind down and otherwise hang out. I picked up two different selections, a Maple Scotch Ale from Dieu du Ciel and a mixed pack (Cannon, Loch Ness and Titanic) of strong beers from Les Brasseurs RJ Inc, also from Montreal.

Cannon
This is a Dopplebock and true to the style it is a rich brown color, heavily malted, with a sweetness right in the center. At 7.6% ABV you could make a pretty good go of an evening with these!

Titanic
This was presented as a strong beer aged on the lees. It was lighter brown in color with a nose full of yeast, bananas, cloves and other spices. Margot said the aromas for too pungent and would turn some folks off. I’d bet she is right. The flavors were very well developed and rich from the sur lie aging. I definitely enjoyed this beer and will gladly drink the one bottle I brought home real soon!

Loch Ness
This was labeled as a Scotch Ale. It poured red/brown with yeasty aromas and some malt and spicy aromas. I did find some of the characteristic acidity and bit to the style, but not as much as I would have expected. This drank well, but didn’t really impress.

This was my favorite of the beers I tried back at the hotel. It poured hazy with a solid brown color. The head stuck around for a while and was off-white in color. The maple flavor was subtle and restrained and the beer finishes with a good deal of acidity. The hops leave a little bite in the finish. It reminded me of my own homemade maple brown ale where it was just ever so slightly sweet and a little earthy, but not far away from the beer of the same style without the maple.

The very last beer I tried while in the city was the Don De Dieu made by Unibroue in Chambly, Quebec. I purchased a bomber (22 oz) of it at a local 24 hr convenience store on my way back to the hotel from dinner with family and friends. It was billed as a strong bottle conditioned Belgian style pale ale. I’d suggest that was correct, although with a lot less of the spice and malt than I would have expected. I may have picked up a bad one or have been fatigued after the prior day’s events, I’m not sure! I enjoyed it, and I slept well after drinking it, but I am not sure it was 100% correct.

So as you can see we take this quest quite seriously. After trying 14 beers (13 of them new to us) from several new-to-us brewers, we have to once again say: “Quebecers Love Their Beer!” And we love them for it.

Jason
Posted by Jason Phelps at 7:59 AM

This sounds like a great way to spend a weekend and makes me want to plan another trip to Montreal.
It was so nice to meet you last night!

What a great review of the beers available in our city! I really enjoyed your post. Hope you don't wait too long before visiting again. Maybe you can continue your research during the Jazz fest, and see the city really come alive.

Okay, that aphrodisiaque and the Clef de Champs sound intriguing and delicious. Of course I always enjoy a good Saison. And Dopplebock, that's just fun to say!

Fun post and I'm bookmarking it for our next trip to Montreal. Did you make it to March Jean-Talone? There's an amazing spice shop there...