One Day in Maine – All Day Breakfast Two

Summer vacation to Maine was one day for us this year. As I am often accused this ended up being a “working vacation” as Margot calls it. We had four destinations with missions in each location. We would travel to Biddeford, Portland, North Berwick and York Beach before heading back to NH. We were questing for local wine & beer, blueberries and lobster rolls at the beach. A day like that wouldn't start well without of good breakfast though. And here’s where I finally get to experience All Day Breakfast from the legends of nearly 15 years ago.
When I first met Margot her and her sorority sisters would talk about car trips back to Maine to go to their sister Jen’s family’s all day breakfast restaurant. Named in that most straightforward of ways (gotta love New Englanders!) All Day Breakfast did just that, served breakfast from morning into the early afternoon closing time, seven days a week. We had never made a trip despite being close by a few times.

In 2004 Jen’s sister Val opened All Day Breakfast Two taking the model she knew so well to a new location not far away. Margot contacted Val a few weeks ago and arranged for us to stop in for breakfast and to get the backstory about the restaurant.
At 10 AM on a beautiful summer Friday the restaurant was pretty busy. In talking with Val I learned that they have a considerable number of regulars but also see fair number of seasonal tourists being so close to the Maine coast. All Day Breakfast Two is open from 7-2 seven days a week and is only closed on a few major holidays. I have it on good authority that they are busy all day most of their summer days which keeps the pace high and the need to be on top of things paramount.

Margot and I perused the menu and settled on the Irish Benedict, Blueberry Pancakes and the Whole Hog Breakfast, one of the day’s specials. As we waited for our plates we chatted more with Val about what makes All Day Breakfast Two what it is. 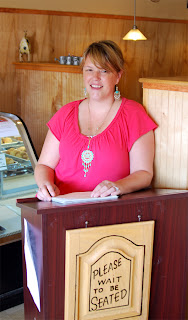 Val was 24 when she opened the restaurant and with encouragement from her parents and experience in the business in hand, she has successfully developed a thriving business. When you talk to her she is clearly passionate and spoke often of the people involved in the day to day, whether they be regular customers or the staff. I asked her if she ever imagined doing this. She replied, “no, I never thought I would go into the family business.” She also added “that taking on opening the restaurant at 24 years old was scary.” I was 26 when I started a consulting business so I know exactly what she means!
As I walked around and shot photos the phrase “country kitchen” kept coming to mind. That is how I would describe the décor and atmosphere. They have a counter that clearly is the center of the action during much of the day. I caught some of the staff talking business while we were enjoying breakfast.
Our food arrived and we switched gears from talking to eating. 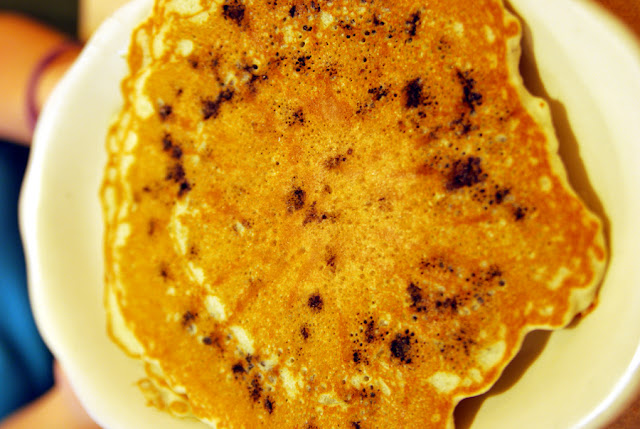 The blueberry pancakes are huge! The pancakes were the first thing I wanted to try. Val confirmed that she gets as much Maine produce as she can from her vendors, and the blueberries were from not far away. The cakes are light with tons of berries from edge to edge. The berry flavor was significant and the cake didn’t taste heavy or thick. I used butter and ultimately some maple syrup, but for berry lovers the syrup was unnecessary! 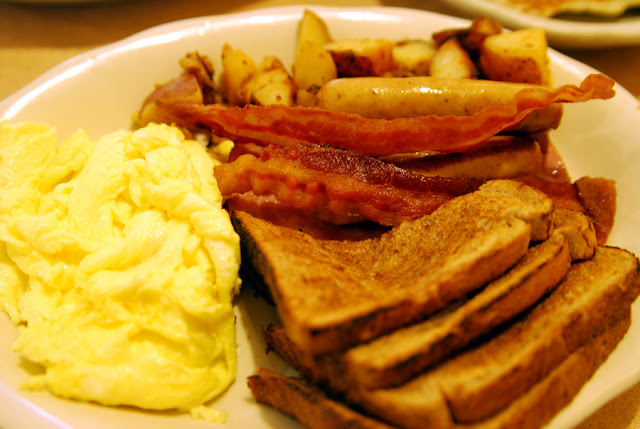 One of the themes we immediately picked up on is how gently prepared everything was. There was no substantial grease or oil on any of the items. The clean tasting flavors of the components of the Benedict and the home fries really came through. The Benedict was that perfect storm of flavors you might think it would be. Eggs Benedict is great with just Canadian bacon, but when you swap out that meat for another form you really can work some magic. The eggs were cooked just to the point of not being too messy to eat, very nice! The hash was flavorful, not salty, and was so savory with the Hollandaise sauce! The potatoes served here could easily go unsung, but when you actually taste red potato that is lightly fried and gently seasoned it is a real pleasure. All of the hog in my Whole Hog breakfast was hot and tasted equally great. 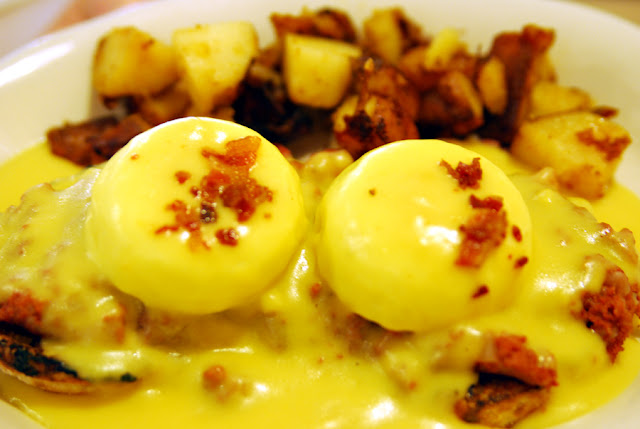 We certainly couldn’t eat all of our breakfast and packed up the rest for home. Sidenote: The leftovers heated up very well and made us happy a second time! 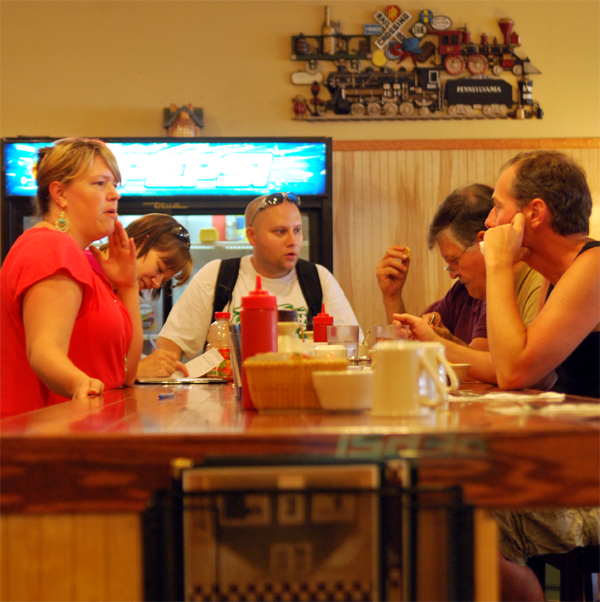 When I was talking with Val I asked about any recent changes to the menu. They in fact did make changes this past May. A revamped the look for the menu, the additions of biscuits and gravy (I hear some people order the gravy as a side for other dishes!) and Panini sandwiches to the lunch section of the menu were the big changes. Another notable point about the food is that they have no fryolaters and no fried items on the menu. Sandwiches are served with hand-prepared cole slaw, pickles and chips. Some folks might miss the fries with a tasty sandwich or burger, but I doubt they can be really missed since they can’t possibly taste as good as everything else you might order.

The menu also includes products of Val’s husband’s labors. Last year he decided on a change of pace and has been experimenting with baking a range of different goodies like muffins, cupcakes, breads and cookies. Taking a look in the case near the entrance and you can find all sorts of things, including several gluten-free products which are quite popular with a number of regulars. We took home double chocolate cookies which sadly never got in front of the camera. But I can tell you they were quite good! The balance between the crunchy and chewy textures was excellent, and the richness of the chocolate didn’t hide. The cookies didn’t last long once we opened them!

All Day Breakfast Two can be found at 420 Alfred Street, Suite 8
Biddeford, ME 04005.
With our to-go bag packed we said our goodbyes and headed for more fun in Maine. Check back for the next post on our scavenger hunt in Portland which includes local beers!
Cheers!
Jason
Posted by Jason Phelps at 9:22 AM

Great write-up of All Day Breakfast! I grew up in the same neighborhood as Jen and Val, and I've been to both locations many times. Every meal I've had has been excellent, and you are so very right about the lack of grease when you get your meal. It's just wonderful!