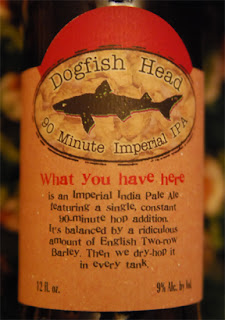 Check out my introduction to the Discovery Channel series Brew Masters in my post from earlier in the month.

Episode 3 of BrewMasters has us thinking about the Dogfish Head (DFH) Punkin Ale, originally inspired by a competition winning beer Sam brewed before he went commercial. This beer is one of the brewery’s most popular and is brewed with cinnamon, allspice, nutmeg, brown sugar and of course pumpkin. I have never quested to try all the pumpkin beers I could get my hands on (yet, I will be doing so this year) so I have to regretfully admit I have never had this beer. It is only available in the Fall and sells out quick. This year I will be primed and ready to get it while I can! The twist in this story was a mixup with bottles that resulted in quite a few screwtop bottles being capped with traditional crown caps, a combination not used by Dogfish Head. The big concern was whether the bottles would leak and render the contents unworthy of distribution. The quality assurance team is called into action to run tests on the errant bottles over a short period of time to determine if they were experiencing any problems. In the end, although no problems were found, the beer was given to employees as part of the normal incentive program. The exuberant comments from several employees at being able to get this particular beer this way was a sure sign that they love where they work.

The second story of this episode was the newest “off-centered” idea from Sam, a beer brewed in partnership with Epic Beer of New Zealand. The brew is brewed using a porter base and smoked tamarillos, a tree tomato found in New Zealand. This beer hasn’t landed in the United States yet and I can’t say whether we would find it interesting or not. The competition it was entered in for Beervana, a New Zealand brewing trade event, did not net an award and it was clear some judges were not sure they could perceive the influence of the indigenous ingredient. At any rate the story did show us how beer fanatics from both sides of the planet can come together to do what they love.

I have enjoyed the Dogfish 90 minute IPA many times. I haven’t had the 60 minute only because I really like this one. As for the 120 minute I just haven’t worked hard enough to get it when it is available. I will this year though.

This beer is a cloudy orange brown in color. The head dissipates quickly. The orange and floral aromas emanating from the glass turn on the enjoyment meter for me. The body has just enough sweetness to it to balance the sour citrus flavors. The malty flavors harmoniously hang with the citrus and pine components. The bitterness on the finish is just enough to be cleansing and the finish lasts. For me this is the best IPA I have ever had. In 2010 when I attended the NH Brewers Fest there was an IPA from Flying Goose which was incredibly pleasing and is on par for the hoppy components in this DFH beer. The Flying Goose version didn’t have as much body and sweetness so it couldn’t top this one, but it reminded me of the many times I have tipped back a DFH 90 Minute IPA. One word of caution. At 9% ABV the 90 Minute IPA creeps up fast. Drink them responsibly.

That wraps up installment two. Check back soon for reviews on Grain 2 Glass (ep. 4) and Ancient Ale (ep.) 5 and tasting notes on Midas Touch and Indian Brown Ale. Hopefully episode 6 will drop soon and I can sit down and try some new off-centered beers while watching the DFH crew create craft beer magic.