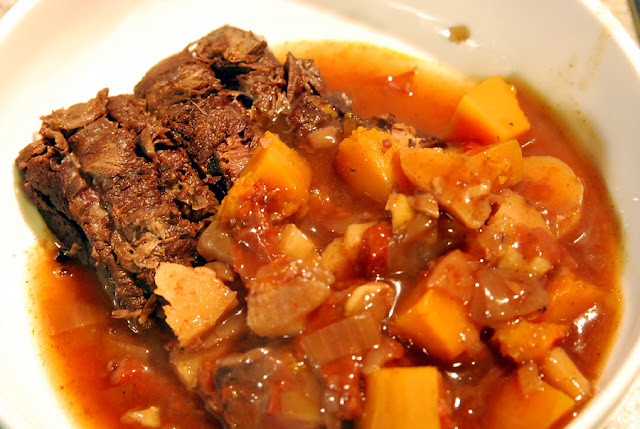 So I get this weird e-mail from a co-worker last week. “Want any venison?” He doesn’t hunt (that I knew of) so I wasn’t exactly sure whether there was a punch-line somewhere or it was a legitimate question. It turns out it was a valid question. A friend of his uses his house a base for hunting and had taken down a deer over the weekend. Payment for the friendly use of his place was some of the kill. I ended up with a three pound roast.

I’ve had venison several times before, but had never cooked it myself. Margot had seen a recipe for a Beef Tagine with Butternut Squash in a the Jan/Feb 2011issue of Cooking Light magazine (p. 80 or at the Cooking Light website). We had planned on making this recipe over the weekend with some local grass-fed beef. I used the recipe as a guide to develop a slow cooker meal around our newly acquired local venison roast.

Most of the slow cooker recipes I have made call for some amount of packaged stock (chicken or beef). I often use vegetable stock instead, but I felt like trying something different for this recipe. I also needed a bit more volume than the tagine recipe called for it to cook it all day. I used ½ of a bottle of Cote du Rhone wine, 1 cup of water and Vegemite. One of the recommended usages for Vegemite is to add flavor and salt to soups and stocks so I thought I might try it here. 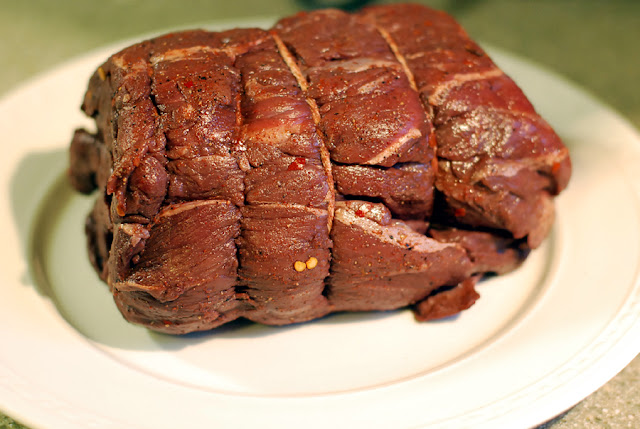 Place the roast in a zip top bag. Combine the next 9 ingredients and mix well. Pour the mixture over the venison and close up the bag with as little air within it as possible. Shake the bag to distribute the marinade. Double bag the marinating roast and refrigerate it overnight.

Assemble your slow cooker and coat the insert with non-stick spray. Turn it on to high setting and cover. Remove the roast from the marinade, patting it dry. Discard the marinade. Heat 2 Tbsp of the oil in a large pan over medium heat. Apply salt and pepper to the roast. Brown the roast on all sides. Remove the roast and place it in the preheated slow cooker. Add the remaining oil to the pan used to brown the roast, increasing the heat to medium-high. Sauté the onions and shallots until just beginning to get brown. Add the paprika, cinnamon, ginger and crushed red pepper. Mix and allow to sauté for 2 minutes. Add the wine, water and Vegemite. Mix the vegemite in. Scrape all the savory bits from the bottom of the pan. Bring the mixture to a simmer. Add the tomatoes and garlic. Simmer for 5 minutes. A slight amount of thickening will occur. Remove it from the cook top.

Pour this mixture over the roast, add the bay leaves and place the cover on the slow cooker. Cook on high for 2 hours. Reduce the heat to low and cook for two more hours. After 4 hours of cooking, add the squash and parsnips, covering them in the hot cooking liquid. Add more wine or water if needed. Continue cooking for 4-5 more hours, until the meat has reached the desired consistency. We like ours to be soft and easily broken apart. Serve the meal in a bowl like a stew with crusty bread and red wine.

I let Margot dig in first. I love to gauge what I am in for from her reaction. She couldn’t stop saying how good it was. “Jay, seriously. This is really good.” I was busy pouring a glass of homemade Amarone to pair with the meal. I handed that to her and asked for a read on the pairing. Her immediate reaction was, “This works perfectly. The meat and vegetables are spicy and the wine complements that very well.” I sat down to dig in myself. Everything she had said was immediately confirmed. If somebody else served this to me and forgot to mention the type of meat, I would never have guessed venison. The wine is full bodied with a little sweetness and a bit of spice that stacked up well with the meat, sauce and vegetables.

The meat was soft and came apart with just a gentle action with a fork. Both the butternut and parsnips were soft but not falling apart. I did thicken (with cornstarch) some of the liquid from the slow cooker to pour over the meat and veggies. This choice really kicked up the flavors, something I would definitely recommend. There is indeed some spiciness from the crushed red pepper. If you have a low tolerance for heat I would recommend dropping the crushed red pepper from the second portion of the recipe.

I look forward to making this type of recipe again sometime. I am not a hunter, but the enjoyment of this meal made me think about how cool it would be to have my very own kill stored away in the freezer!

Jason
Posted by Jason Phelps at 6:56 AM

I've never had venison, but I had seen this recipe for beef and thought I might try it in my new tagine. I have some unpleasant associations with venison that may prevent me from ever trying it. But I've had bison and it was good.

Wow - that is local meat, right there. Generous neighbor. A beautiful dish here, love the colors, that sauce needs a good hunk of bread!

Venison is wonderful and what you've done with it here is absolutely perfect!!!

Not fair Jason, not fair.. my dad hunts and I always look forward to the pounds of meat he hands my way.. but not this year :( A combination of being too far away and him being in Afghanistan= no venison for this girl.. I guess I'll just have to gawk at yours!

I've not had venison, although my mother has many times over the years. She'll love this. It looks so warm and comforting for this time of year.

What a gorgeous hunk of venison. I'm a total fan of game meats, but am separated by waaaay more than 6 degrees from anyone who hunts, so for me to indulge my fondness requires taking out a second mortgage. I am living vicariously through you right now, Jason. Oh, and the wine-pairing possibilities. *sigh*

When the leftovers were gone there was sadness all around. My co-worker took one look at the recipe and was already thinking about what he needed to make it!