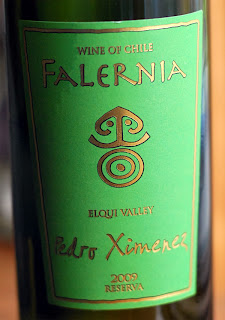 I picked up a bottle of Falernia Pedro Ximenez 2009 at Bottles in the North End of Boston in 2010. I wrote a bit about my trip to Bottles in a post last year. It was actually that visit and the conversation I with Peter at the shop that got my wine region project started.

The aromas from the wine were definitely fruity with some white peach and green apple. A floral note was present, but subtle. The predominant flavor for me was lemon and the sweetness I detected was surprising for what is billed as a dry wine. Upon researching the wine it would seem others have said the same thing and the actual residual sugar is very low. There was a mild hit of acidity in the middle of the taste and the finish was of moderate length.

Unfortunately I felt like the wine was falling apart before I even got to the bottom of the first glass. The aromas and flavors seemed to come unhinged. The serving temperature is suggested at 50 degrees so I threw it into the fridge to see what some additional chill would do. It was pleasing again after it cooled down, but it seemed to degrade fast with as it warmed up.

The Falernia page at Wine-Pages has some interesting information about the Elqui Valley and how grape growing and winemaking go started there.

The funny story I was told about the wine is that is made from a red grape traditionally used to make Sherry in Spain, that is grown in Chile, and tended to by a guy from Italy. Oh, and it is a dry white wine. Talk about a state of confusion!

Wines of Chile has a page on the Elqui Valley with a map showing its location in relation to other winemaking regions in the country. The valley is at the southern edge of the Atacama desert and has some serious elevation (6,000+ feet) where grapes are successfully grown. The region is better known for the grapes grown for the distillation of Pisco. Red wine grapes dominate by a large margin these days.

While I didn’t find this particular wine to be exceptional, I will be back for more adventures in Chilean wine. In 2010 I had Chilean wines made from Torrentes as well as one from a blend of Carmenere and Cabernet that were both excellent. Later this year I will be bottling my homemade wines made from Chilean grapes. Recent tastings of them suggest that I will be happy with the effort put into my Cabernet, Syrah and Malbec from Chile.

Jason
Posted by Jason Phelps at 9:01 AM