A Twist on Rum Punch 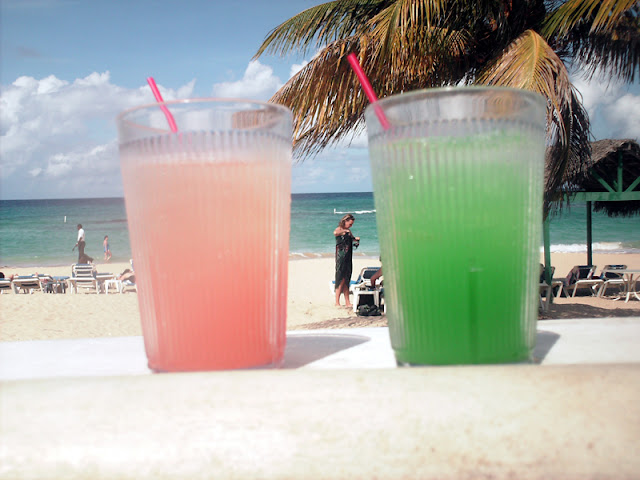 ( a Rum Punch and a Cool Runnings hanging out on the beach. )
One of my favorite drinks when on the island of Jamaica is rum punch. Memories of Jamaica are always very special for, because that’s where I met Margot. Technically I met her at Boston’s Logan airport on our way to Jamaica, but screw technicalities.

Rum punch is pretty much juice, sugar and rum, and is often mixed up in large batches to be consumed in kind. I’ve had it on every trip to the island and it packs a pretty mean punch (the play on words is totally intentional!) with sweetness, acid and a nice pleasing finish.

In chapter 5 of “And A Bottle Of Rum – A History Of The New World In Ten Cocktails”, written by Wayne Curtis, we find a whole section on Planter’s Punch, the origination of what we now know as rum punch. Rum fueled the history of the colonies and ultimately the United States, something many people don’t actually know. William Penn was said to have thought that rum punch consumption rivaled that of beer in the colony of Pennsylvania in the 1700’s. In this section of the book we also find a quote containing the four basic ingredients of early rum punch, “One of sour, two of sweet, three of strong and four of weak.” Pretty simple.

( one of the drink signs at Sandals in Ocho Rios. I love their Rum Punch! )
On January 26th, 2011 from 4-6 PM PST there will be a cocktail TweetUp and the topic this month is rum! Use the hashtag #drinkup on Twitter to share your experiences and follow all the action. We will be celebrating rum cocktails, rum history, rum adventures, new products and stories about vacations planned in the search of rum! Check in with @MyMansBelly for @AncientFireWine for more information.

Here is my spin on rum punch to help guide you on your way to the TweetUp next week. 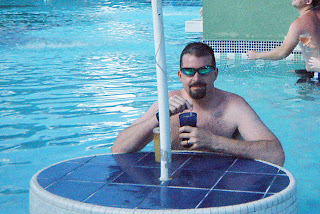 ( that's me killing a Rum Punch and a Yellow Bird in Ocho Rios. it was 10 AM! )
Earlier in the day @RumShopRyan asked on Twitter if anyone knew what today was. The answer was Boat Drink Day. I had to look that up because I am not really well versed in island and maritime drinking culture. Wednesday, was my answer. While correct and with sufficient wise-assery, I was wrong. I try.

Jimmy Buffett used the phrase boat drinks in the title for a 1979 song. The definition is of a strong drink, typically rum based, that can be easily made on a boat. Not to leave us hanging @RumShopRyan passed along the link to the recipe for the Coconut Cruise Cocktail, which can be found at http://rumshopryan.com/2011/01/19/coconut-cruise-cocktail-drink/. I will surely be having one of these during our TweetUp next week!

That sounds like a great rum punch. I've never made one with wine before. I can't wait to give it a try.

Thanks for the shout out buddy. I'm glad I could help further your drinking education. Boats Drinks are an important part of the Castaways diet. Helps one relax while thinking of warm days on the beach. I will definitely be giving your rum punch a try. I love a gooooood rum punch. Thanks again.

Your close-up of the pretty drinks on the beach have me dreaming of warm days... Thanks for the rum punch twist and a little summer sun on this chilly January morning!

With all that nasty snow outside, I'm glad I get to at least look at a lovely picture of a beach and a delicious drink! It looks so yummy!

I so want to be on the beach with an umbrella drink. Instead, next week I'm headed to freezing Europe on a business trip.

Loving these cocktails... really brightened up my morning!

We went on our honeymoon to a friend's wedding in Grenada. There was delicious rum punch all times of day and night on boats and beaches and in bars, and the locals had a cool little saying about how it was made. I totally can't remember, but it had a couple of different rums and Angostura bitters. We made it once for a party, and no one wanted to touch it :)
Yours looks like something we could drink a lot of!

I'm not drinking right now, but as soon as I am, I'll definitely try this punch!