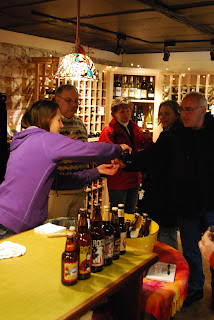 I only got out to one local beverage event this week, the Winter Beer Tasting at The Drinkery. In the week or so leading up to the event Joan sent out a note to her newsletter recipients with the list of winter beers she had on hand. She was asking us to vote on what would make the lineup on tasting night.

I had sampled several of the beers in the lineup at the NH Brewers Festival in 2010, and had included several others in the beer tasting at our holiday party. My votes were split between some I had had and some new selections.
And the final lineup was: 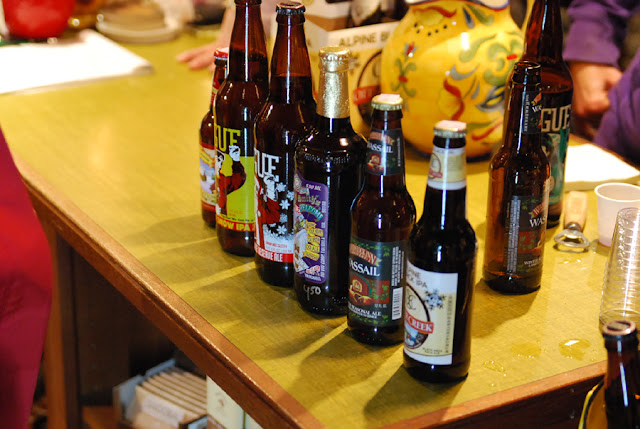 ( winter beers lined up and ready to sample! )
My tasting notes on the first four can be found in the holiday post linked above. The Woodstock Wassail was one I tasted at the NH Brewers Festival. The comment I made to my friend Richard then and that was backed up again this week, is that is smells like maple syrup covered French Toast. Several of the other tasters found that to be apt description.

The Otter Creek Black IPA was definitely interesting. Nice and hoppy like you would expect from an IPA with dark malt flavors reminiscent of a stout or a dark brown ale. This is definitely a winter warmer with some character. 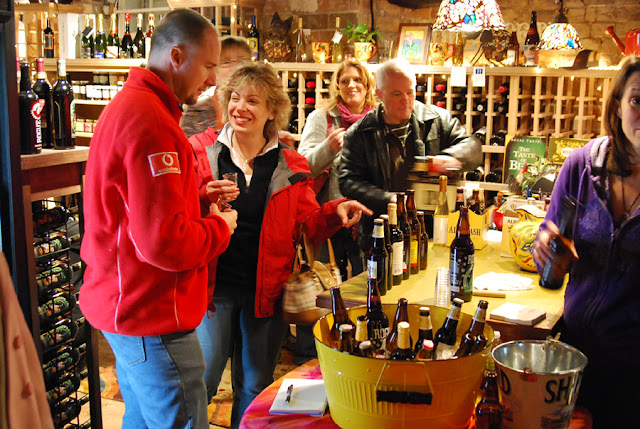 ( as you can see, the place was hopping! )
The beer I was most interested in trying was the Rogue Mogul Madness. I knew I was going to buy one even if I didn’t get to taste it, but Joan cracked one as soon as I asked about it. Thank you so much Joan!

The hoppy nose is nicely enveloped in malty aromas making for a pleasing warm smell. The malt flavors are reasonable and there is only a mild hit of acidity. This is a sweet spot of a hoppy/malty beer for apre-ski warming. I am hoping to visit Rogue later in the year. I might not want to leave! 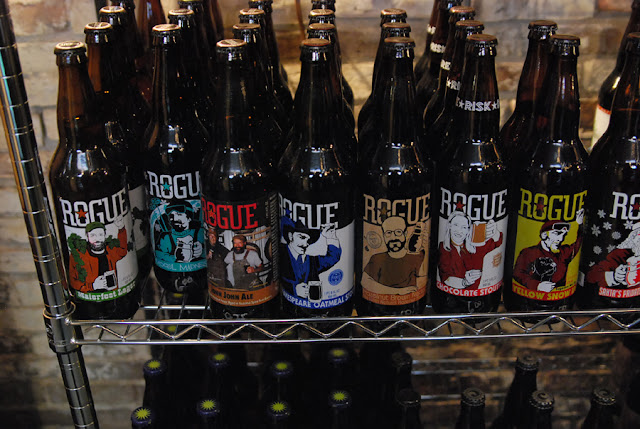 ( Rogue makes an interesting lineup of beers. )
Margot went with me to this event and of course got excited at the selection of beers to take home. She hadn’t had the Brooklyn Chocolate Stout yet so that was added to our mixed six pack. Also in the pack was one each of the Dogfish Head 60 Minute IPA, Midas Touch, Indian Brown Ale, Palo Santo Marron and Burton Baton. Reviews on these will show up down the line. We also grabbed a Rogue Mogul Madness and a Shipyard Prelude. I can’t wait to crack one of these after a snowshoe trek! 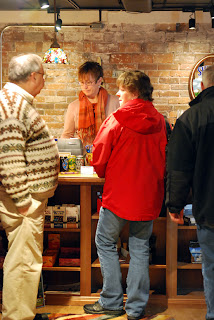 *** Don’t forget that the Easter Seals Winter Wine Spectacular is coming up on January 27th. Tickets are sold out (or nearly so) but there are many other events going on during Wine Week. Check the event web site for more information.
Posted by Jason Phelps at 3:17 PM

Oh, this looks like so much fun! (Too bad I'm on a drinking detox until Feb.!!!)

This is a great post, I know little about how to discover new good beers (or wines) and it's so great to have someone else do all the dirty work for me!