Margot and I lined up three local meads to taste last night. We went simple with the pairings, aged sharp cheddar from Grafton Village Cheese Company and Double Stuff Golden Oreos. There is a story about the Oreos from our Rum TweetChat earlier in the week. You’ll find the story a bit farther down.

Mead is a fermented beverage traditionally made by fermenting honey and water. There are lots of variations on this basic construction like cysers, pyments, braggots, melomels, metheglins and many others. We mentioned Tej in our first post about the Discovery Series Brew Masters. Tej is an Ethiopian fermented beverage also classified as a type of mead. Wikiepedia has a list of all the types of mead and some history you might find interesting. The oldest record of mead productions from 7000 BC! I have made mead once, technically a combination melomel and metheglin, from blackberry puree, honey, water, nutmeg and yeast. I am planning on a making a vanilla/orange (think creamsicle) mead sometime this year. 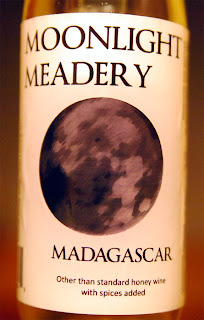 When I say local I really mean it. Two of the selections are from Moonlight Meadery located in Londonderry, NH where we live. I could walk there in less than five minutes. I met Michael Fairbother, the owner and mead-maker, at the opening of the new space they moved into right before Christmas. Michael is very active with Brew Free Or Die a local homebrewers club to which I have yet to make my first meeting. The third selection is from Isaaks of Salem in Salem, MA. I heard about Isaaks of Salem through Twitter where Ian, the owner and mead-maker, is quite active.
We tasted them in two rounds, the first without food and to collect notes on the appearance, aromas and flavors. The second round was all taste and pairings with our cheese and cookies. We also paired the second round with the first new episode of season 2 of the FX series Archer, a huge laugh for rough around the edges types like us!
The first mead we tasted was the Moonlight Madagascar. It is made with honey, water, Madagascar Bourbon vanilla beans and yeast. This mead is light gold in color and brilliantly clear. Aromas of spice and candle wax were detected. I didn’t initially detect the vanilla aromas as I am used to them but as it breathed a little it came along. It is dry with a delicate texture. We found the honey flavor in the finish along with a bit of alcohol. If you thought candle wax (from the prior sentence) was weird get this, both of us agreed that the flavor of tamale or corn cake was predominant in the middle to the end. It was pleasing but definitely an interesting nuance. I quickly noted effervescence in the appearance during the first round and then again in a taste in the second round. It was subtle, but there. 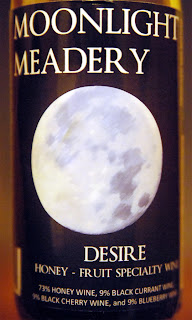 The second tasting was of the Moonlight Desire. This mead is made with honey wine as well as slightly less than 10% each of black currant, cherry and blueberry wines. The color is of aged dark red bricks. Having made black currant and cherry wines before I noticed the parallel in the slight brown shift in the color. While this might be a sign of age in a traditional red wine, here it is something found in the young wines of those wine types. The blueberry and cherry aromas are wrapped in honey on the nose. This mead has incredible balance with noticeable tartness that transitions to a sweet finish. There are spiced flavors present but the fruit flavors a naked and accessible. The black currant comes through after a second and third taste with dried raisins being the most comparable description. Margot said it tasted like a berry blintz.

This past Wednesday Pam of @MyMansBelly organized a TweetChat with the topic of rum. I love rum and ended up posting three times leading up to it. I have posted lots of recipes for different rum drinks and if you are interested go find the post from the day of the event here. During the event Janis, Brian and I got to tweeting about Brian’s recipe base for Hot Buttered Rum. Janis mentioned that she was putting Southern Comfort in it to which Brian responded, and in his typically snarky way, “oh how delightfully trashy!” We all laughed quite a bit over the comment and Janis said that the acronym DT would now be a code word for all us. Not to let anyone down I used it on Friday when I asked jokingly how I could put a DT spin on my local mead tasting. And then came the recommendation to pair them with vanilla Oreos. It really isn’t a trashy idea and we have used cookies in wine tastings before so we were surely going to give it a go. 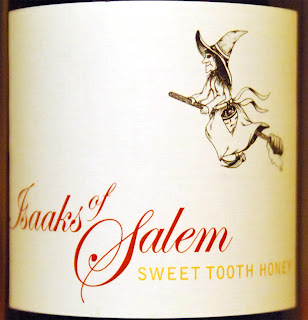 The final mead we tasted was the Sweet Tooth from Isaaks of Salem. I met Ian from Isaaks a few weeks back at the Boston Wine Exchange. He was in to share his meads with the shop owners and possibly get them to stock his available meads. Thankfully they did and I purchased both the Sweet Tooth, tasted here, and the Hopp Road Raspberry that will be tasted in a few weeks. This is a classic mead made form honey, water and yeast. Unfortunately the mead poured with a slight haze to it and an appearance of carbonation both visually and on the tongue. I don’t believe this is intentional and the question about the carbonation came up during my first tasting of it as well. Ian didn’t believe he could detect it and conjectured that not everybody might. He is quite right about that and I am sure is keeping track of how often this comes up for future reference. We picked up aromas of golden raisins white flowers, citrus blossoms and vanilla. I picked up the honey flavor in the middle of the sip and found a slight drying, almost like that you get from tannins, in the finish. Margot said it smelled like Sara Lee pound cake. I agreed and thought that might be something that would appeal to a lot of people. 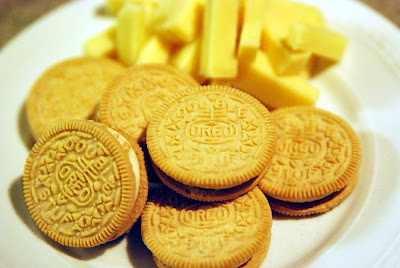 ( DT all the way! )
During the second round we didn’t find that the first and third meads were enhanced by or themselves enhanced the cheese or cookies. The Madagascar actually had its alcohol elongated by the cookie and it wasn’t pleasurable. The Moonlight Desire however, was excellent with both. With the cheese the Desire took on an elegance that held me in place for a bit. The cookie opposed the mead with just enough sweetness to match, and the tartness of the wine kept that sweetness in check. We both went back for both of more of those pairings.

I am a big believer that all food products (that aren't going to make you sick excepted) are owed respect and should be used. With that idea in mind I have plans to try some cocktail creations with the Moonlight Madagascar and the Isaaks Sweet Tooth meads. Nothing I am suggesting indicates that I didn’t like them, but I am taking a bet that I can find ways to increase my personal enjoyment of them through a little experimentation. Hopefully Michael and Ian aren’t going to hunt me down and kill me! The flavors of these two meads should make great anchors for drinks with traditionally neutral ingredients, think martinis, and might be accentuated with bitters and some hand infused spirits. This is sure to be a fun way to experiment with local products and who knows, we might even discover a new drink that everyone is going to want to have.

I have to admit that I've never actually tried mead. After reading this I'm eager to try! Sorry I missed the rum chat. I will have to check out the rum drinks... rum and I get along well!
Delightfully trashy, I love that!!! Janis absolutely cracks me up, I love her blog!

Great blog! I browsed through looking for the Oreo reference, and got lost in Meyer Lemons. Wonderful, interesting recipes, too. I'm a follower.

This is Ian here, the janitor/winemaker/owner of Isaaks of Salem. Thanks for a great article! I am a little jealous at the local honey wine spread you got to try. It is sometimes difficult to find enough stores to get differant brands that are local.

I did want to point out that the bubbles you experienced are 'normal'. I would have liked to vacuum the wine to draw-out that residual C02, but was unable to do so with our equipment. As the bottles warm up, the C02 expands and 'degasses' from the wine, creating pressure in the bottle, and those small fizzy bubbles. If the wine is decanted, they will go away in about 15 minutes. All bottles are safe, and will not break under this small amount of degassing pressure. (for those who might be worried)

Look forward to more posts and thanks for the review!

Thanks for the feedback.

Great read and nice review Jason...
and I see those Oreo cookies :)