Inspiration for a Rum TweetUp! 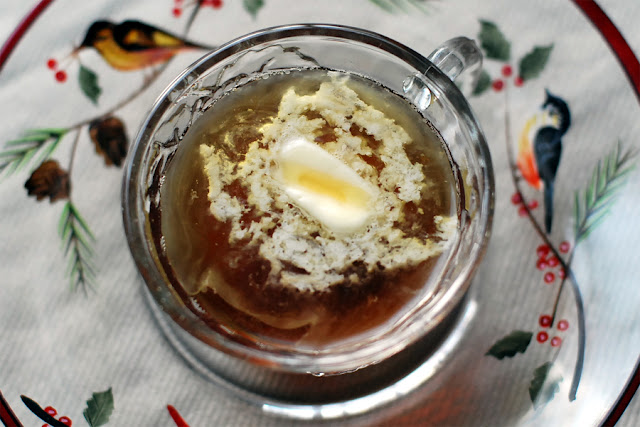 On January 26th, 2011 from 4-6 PM PST there will be a cocktail TweetUp and the topic this month is rum! Use the hashtag #drinkup on Twitter to share your experiences and follow all the action. We will be celebrating rum cocktails, rum history, rum adventures, new products and stories about vacations planned in the search of rum! Check in with @MyMansBelly for @AncientFireWine for more information.

In preparation for our TweetUp I offer some inspiration in the form of a rum based hot toddy, the Hot Buttered Rum.

Place the equal portions of cinnamon stick and vanilla in 2 heatproof mugs. Heat the rum, water, simple syrup and sugar in a saucepan until almost boiling. Remove from the heat and pour into the mugs. Put the pieces of butter on top of each and let it melt into the mixture.

Crafted Manhattan competition. I didn’t win and the person who did made a ginger infused drink. The drink doesn't contain rum, but that doesn’t mean I can’t share the recipe with you!

Combine, stir and serve. Add a cinnamon stick and orange twist for garnish

It is so cold out tonight and this looks so absolutely wonderful. I really want to make one of these.
Thanks for the recipe!

A great way to forget about the snow outside! Thanks for sharing.

Oh if only I could have one now. This whole working thing is getting in they way of sampling some tasty beverages. I love rum. Can't wait to try this.

Perfect for a cold, snowy day!!

Yum! I have a great tottie recipe, but this looks pretty awesome too. I love the ability to change it up a bit.

This toddy sounds sooo good - especially right now with all that snow and cold! I'd love to have a sip! :)