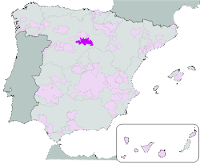 This visit is virtual, and hopefully our descriptions are enticing to anyone wanting to explore winemaking all over the globe.

Ribera del Duero. Located on the northern plateau of Spain within the community of Castilla y Leon, it is one of nine recognized winemaking areas in the community. It is believed that viticulture has been part of this region and its culture for over 2,000 years. What we recognize as winemaking today became part of the local culture in the twelfth century, most likely introduced by Benedictine monks from the Burgundy region of France. Even with this longstanding history it was not until the 1970’s that the region became internationally known for its wines.

Heralded for its natural beauty with sweeping views of the Duero river Valley, this region has maintained it sense of history. Along with the modern winery facilities that dot the landscape the region also boasts testaments to its past through the various monasteries, churches and the Peñafiel castle, in the town of Peñafiel. This castle not only provides breathtaking views of the valley but it is also home to a wine museum. This wine museum is known as a must see if you are visiting the region and is geared towards serious wine lovers who really want to know the details of winemaking and viticulture.

The heart of this wine region is the Milla de Oro, or Golden Mile, which is a parcel of land that runs alongside the Duero River. The area is said to have been the land that proved vineyards could grow and florish in this sometimes harsh region. Along the Milla de Oro you will find many of the cornerstone wineries of the region including Vega Sicilia, Pingus, Abadia Retuerta and Mauro.

Wines from this region of Spain are almost exclusively red wines and the white wine that is produced from the Albillo grape is consumed locally. The predominant red grape is Tempranillo under its regional name Tinto Fino. Though the majority of the bottlings are blends with Grenache (Garnacha), Cabernet, Malbec and Merlot there are some varietal bottlings that get high praise.

Due the fusion of Mediterranean and Continental climates (due to being on a high plain), fertile soils and moderate-to-low rainfall the grape growing areas are especially suited to the production of excellent red wines. The Tinto Fino grape has a thicker skin and smaller berries which translates into surface area and an extraordinary extraction of color and body in red wine vinification. 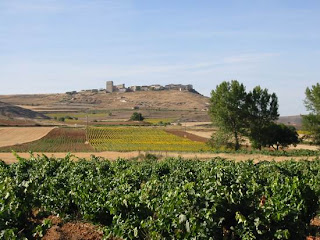 Wines bottled under the region’s DO (designated Spanish wine region) come in several classes, Joven, Crianza, Reserva, Gran Reserva and Rosado. Starting with no oak we then have oak aging and bottle aging for one year each, one year in oak and two in the bottle and then to a select category only made in the best years, requiring five years of aging two of which are in oak. Rosado wines are early released wines made without skins with fresh fruit flavors and easy drinking.

There are some similarities here to Rioja to the north, but ultimately differences in local geography and climate (terroir if you like), the grapes, and thus the wines, are quite different between the regions.
The regional cuisine is dominated by the Castilian-Leonese style where you might find chickpea based stews as a signature dish. Made in many styles, they often include vegetables, sausage and meats. They are found alongside soups, both used to fend off the cold of the winters of the region. Roasted lamb and suckling pig are other specialties found within in the sub-regional cuisines. This area is also known for its long history of bread making.

We chose to recreate two dishes, a Garlic Soup and Olla Podrida, a slow cooked stew of meats, beans and vegetables. Its name means “rotten pot” which is a reference to the method of letting it cook so long it turns into a mess of a dish! 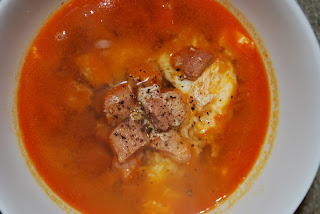 The Castilian Garlic Soup (Sopa de Ajo) is a very simple soup made of sautéed garlic and ham with water, salt and paprika to give it some zip. We used the recipe at About.com as a guide and served the bread on the side rather than in the soup. We let is simmer for a longer time only because we had the time. Looks good!

While it may be simple, we assure the soup is really, really good! It is light with a subtle heat. The egg is essential adding its own flavors and textures. We feel like this soup celebrates garlic as a flavor and not just an accent or spice. Margot thought this might be excellent for breakfast and during the colder months here at home.

The Olla Podrida was a bit more of an experiment, something that never having had can’t clearly be considered authentic. The name translates to “rotten pot” or “putrid pot” or “messy pot”, a reference to the long slow cooking time and the eventual breakdown of the dishes’ ingredients.

I smelled this dish cooking in the slow cooker all day! Here is what is looked like when I assembled it. The recipe follows. 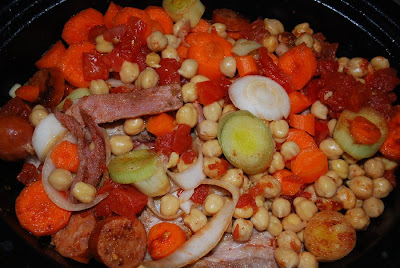 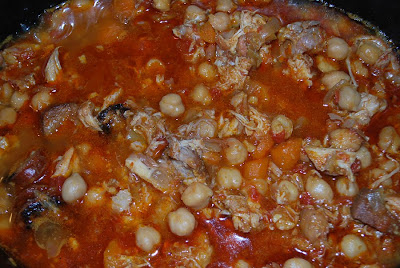 (10 hours later)
Spray the inside of a slow cooker with cooking spray. Turn on to high. Sear the ribs on all four sides for few minutes before using. Cut the sausage and ham into chunks and sauté briefly. Slice the onions, leeks, carrots, diced the garlic and chop the tomato and place in the slow cooker. Add the sausage. Add the cumin, chili powder, paprika, 2 tsp salt and ½ tsp of black pepper. Mix well. Open the cans of beans and drain. Add to slow cooker. Open the can of tomatoes and dump into cooker. Mix well. Remove 6 cups of the mix in the cooker and place the ribs on top of the remaining mix. Add reserved mix and 1 cup of water to slow cooker and cover. Cook on high for 3 hours and low for 6-8 hours. At 4 hours and beyond, stir stew twice per hour. Serve with crusty bread and Tempranillo based wine. 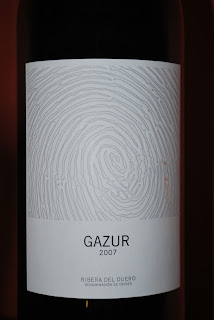 We paired both dishes with the Gazur 2007 Ribera del Duero we sourced from Wine.com. The wine has a wonderful fruity aroma and strong raspberry flavors. Some dark cherry tartness was easily recognized as was some smoke and spice. The mellow tannins would make for a nice smooth introduction to bold red wines.
The wine made the garlic and gameyness in the ham pop! The flavors in the wine and the meat in the Olla Porida were so well matched. The subtle heat of the stew was not extended by the wine which made for consistent enjoyment.

Margot said “I do not have words for the deliciousness we just had.” I guess that says it was good.

Somehow I think we did a good job capturing the spirit of the Ribera del Duero region and have an appreciation for some of the food culture one might find when visiting.

Really interesting, I love the soup idea, did you use a chicken stock?

Thanks for stopping by my guest blog on The Messie Kitchen :) This soup looks delicious and you pretty much had me at wine.. where are you based out of with your homemade wine and beer??

Great post! The dishes look wonderful and the detailed background on the wines and region are an excellent read:)

Great post, very thorough and interesting. I'm studying Spain in my wine class so this is very timely!

Of course no post about wine within the Rivera del Duero region is complete without mentioning just how much the special climate influences the taste of wines produced there. Especially with the Tempranillo grape, the extreme temperatures really make a difference. The summers can be 100-110 while winters go to -20. This extreme temperature range in a high climate, along with the short growing season produces grapes with intense tannins and dark colors. These grapes have a great acidity that gives the wine a powerful fruity flavor that you can drink right away while also aging nicely. Any wines from this region work well with the dishes you had.

Just over a year has passed since your virtual tour of the Ribera del Duero region. I have to admit I didn't read your post until very recently. Are you any closer to visiting in person? We're only a few weeks away from vendimia (harvest) and just before that Aranda de Duero has an annual fiestas (wine festival) in September which is very popular.