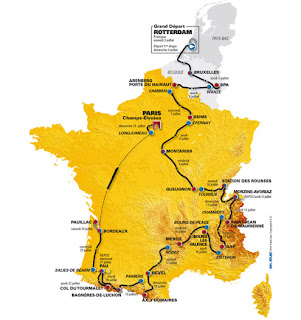 My love of the Tour de France started in a similar way as it did for Barbara at the Winos & Foodies blog, just one year earlier. If you haven’t read any of Lance Armstrong’s books, you should. Attitude is altitude, and we all could use an attitude boost now and again! Check out Barbara's LIVESTRONG With A Taste Of Yellow story

I wasn’t blogging at the time, and even when I started I didn’t connect the Tour, food and my blog until this year. I had some early plans of doing meal and wine pairings with key stages, but some other projects came up and I had to make a choice about the reach of competing ideas. The Tour lost. With some time I figured I could at least see what else is going on in the food blogosphere related to the tour.

The Gastronomic Duo, a blog I read often, have been profiling stages with recreated dishes and regional wines. From the first read I knew what kind of research and time goes into such an undertaking. Keep that in mind as you take a look at what others I found have been up to this year. Please read and comment on these works, they represent many individuals collaborating to celebrate many different countries coming together to compete. The best of humanity.

Winos & Foodies organized a Taste of Yellow 2010 group project for the Tour this year with different bloggers profiling the food and drink for each of the stages. I wandered through a sampling of the posts and found lots of history, geography, regional foods and of course wine. The tour is travelling through Reims (center of the Champagne region) and will be holding the time trial in Bordeaux and Pauillac so there is plenty of good wine within reach of the spectators! I'm in for next year.

David McDuff also has a stage by stage food blog going, an obvious pairing of his everyday wine blogging activities and interest in cycling. In his profile he mentions offering private sommelier services to local clients, something I will be asking some curiosity questions about for sure!

And “abc” over at the Wine Book Girl blog has her beverage focused stage by stage profiles going as well. I haven’t gotten through all of the posts yet, but the wine list from all of them will be useful region by region wine tour of France.

At this point in the Tour the riders are deep in the Pyrenees and climbing away. This year marks the 100th anniversary of the Pyrenees having been ridden in the Tour, which doesn’t really matter much to me. Climbing these mountains looks hard and is not something you’ll catch me doing anytime soon!

I did a little searching of my own to better understand the food and drink you might find in the Pyrenees, a crossroads of cultures, political divisions, languages and food.

Cheese was the first thing mentioned, which always works for me. Shepards in this part of the world typically (until recently) make their own unique style of cheeses, with variations having partly to do with what animal the milk comes from and what the animal was grazing on. Charcuteries (pate, tourine), confits and other types of duck preparations came up was well.

Cassoulet is the dish the region is most known for, a flavorful casserole made from white beans and several types of meat. The dish is slow cooked and recipes are varied throughout the region.

Today’s stage 15 finish is in Bagneres de Luchon often known just as Luchon. It turns out that Luchon has two dishes that are uniquely its own, Pétéram and Pistache. Pétéram is made from sheep tripe and served with potatoes soaked in white wine. Interesting. Pistache is a stew of mutton, tarbais beans and ham. That seems a bit more my style.

The region also had a number of sweet treats that hail from it, including Croustade; an apple tart made with flambéed apples lightly wrapped in pastry. I think a tasty glass of Armangac and some Croustade sounds good to me. Especially after a tough day of watching the tour!

And finally, the beverages. There are several regional wines that like many from other winemaking regions of the world are the best fit for the local food.

Madiran is an age-worthy local red wine that is suggested to pairwell with the local cheeses, meats and cassoluet. Madiran is made from the Tannat grape which is known for its high level of tannins. This wine was described as powerful in several places I researched it.

Jurançon, a local white wine was recommended for pairing with the local foie gras. Jurançon is made from the grapes Gros Manseng, Petit Manseng and Courbu. It is made in both dry and sweet styles.

Armangac is and eau-de-vie (brandy) made in Gascon, a region in Midi-Pyrenees. It is typically served as a digestif after meals or an ingredient in the best dishes. It does not have the profile of Cognac, to which it is similar, although Armangac is the oldest brandy to be distilled in France.

Although I haven’t watched the coverage of today’s stage yet I do know the outcome and what a Tour this is turning out to be! I am still a fan of Lance and since Team Radio Shack is leading the team competition I still have a lot of cheer for. I am a fan of Cavendish for the sprinting competition, but I can’t say whether he will get there this year. I don’t have a favorite for the king of the mountains, but a Frenchman wouldn’t be a bad thing at all. For the overall winner I am a Schleck supporter and am hoping that Levi Leiphiemer can pull himself up to the third spot, but that seems like a far way off.

Next year, why don't we all get together and divide up the stages and each can cook a dish from a stage and it's region...

Have you seen my Tour de French Cuisine now in its 4th year?

I enjoyed reading about the different French wines and like the idea of posting recipes from the different stages of the tour, bon appetit!

Jason, I love the idea of doing a culinary Tour de France! Wonderful post... I'm an Andy supporter as well... and it's a good thing you didn't watch the stage yesterday because poor Andy had a bit of a tough time. really enjoyed reading your post!

Hi Jason, thanks for the shout out. I originally planned on doing all the stages myself but I felt to do it justice it needed the input of more people. When I posted a request for participants, I was overwhelmed with the number of bloggers keen to participate.

Anyone know of any blogs doing the tour this year? I always hold a party at the end and am always on the lookout for inspiration! Well done everyone!