Story Pairing – Learning to Cook from my Mom 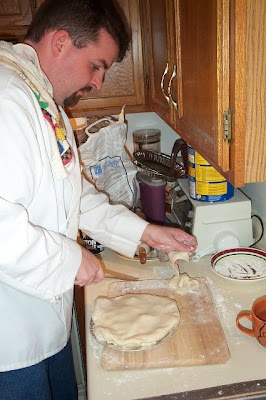 Today I am going to do a story pairing instead of a beverage pairing. The Manly Housewife posted a story and a recipe today for a dish from his wife’s childhood. He also considers the passing of knowledge from one generation to the next.

There is a picture in a family photo album somewhere of me banging on pots and pans in the kitchen while my mom cooks. I can’t recall how old I was, but I was pretty new. I guess it all started there. I wasn’t just playing, I was trying to mimic what I saw. I loved to eat as a kid, still do, but also developed a passion for cooking. My mother was extremely helpful showing me different techniques, teaching me about baking, and passing on some of her curiosity about food There were a lot of things I still didn’t eat until much later, but that wasn’t for a lack of trying.

The picture to the left is of me cooking pies for a fundraiser we did in 2003. The Lance Armstrong Foundation was the recipient of several thousand dollars raised selling homemade apples pies. I couldn't find a pic of Mom and I working together, but she was there and loves my apple pie.

My mother still recounts the joy she felt when my high home economics teacher told her how exciting it was to have me in class, and a boy no less! For a time I toyed with culinary school, but math and science took over and ultimately helped me develop a career as an IT consultant. I cook so much now that that choice doesn’t haunt me.

We camped a bit when I was kid; something communal with our church family during the nice weather. I was also in the Boy Scouts, an Eagle Scout actually, so I had plenty of opportunity for campfire and camp stove cooking. That style makes you resourceful and my mother always enjoyed trying different things with us around the fire, and that I was often up first to get the cooking fire going.

For years my mother would faithfully develop menus for family meals and stock the fridge so that I could take a turn at cooking dinner. When she went back to work, having a son at home to get dinner ready here and there must have been useful.

There were the cookie swaps around Christmas, countless holiday meals with the extended family and other gatherings that we collaborated on food for. I think we were both going to school to learn how to be better cooks and teach others the same. My mother never worried about what I would eat when I went off to college, I could cook. When paired up with roommates who couldn’t, I took full advantage. We all bought the groceries, I cooked, they cleaned up and I took my free beer (thanks guys) and went out and hand fun. Awesome arrangement!

These days my mother is a proud fan of my Ancient Fire wines and loves talking about how we pair wine with food, find new wines, try new foods and most recently the meeting of fellow food and wine bloggers on the Web. When we head up to the house in Vermont for the weekend there is usually a lot of conversation about what we are going to cook. When you are such a beautiful place having good food and wine is icing on the cake.

Now that I am getting around to eating some of those things I passed on as a kid my mother smiles. She gets really excited when I prepared them when she visits, because she often loves the dishes and doesn’t make them at home because my dad isn’t as fond of them. My dad is an eater, not a cook. That is not to say he doesn’t enjoy the results of our efforts, just not as much and he usually doesn’t have as much to say about it. Pour him a glass of a good scotch other hand and then you might be a while…

Pouring Dada a good glass of 12 year old single malt is never a bad plan if you want the night to go well.