A Cold One on a Hot Day

During the past few months Jay has made a point to delight you all with various drinks: herbed cocktails, beer comparisons, and most definitely wine. When I was walking through the grocery store last week I saw one of my favorite summer time drinks sitting there in the aisle, no ID required this beverage is for everyone: Root Beer.

On a hot day nothing makes me happier then “crackin’ open a cold one”. In my case the biggest joy comes from an ice cold bottle of root beer. Now, I am not talking about just any old root beer, nope, it has to be the good stuff. I guess you could say that I am a root beer snob. When looking for a root beer there are a few criteria that MUST be met:

1. It MUST come in a glass bottle. No cans or plastic bottles allowed.
To have the true root beer experience is to have that feeling of that cold glass against your hand as you drink it.

2. Small batch is good and local small batch is even better. Just like with regular beer the smaller batch root beer tends to have more flavor complexity and lower carbonation. Let’s call it “artisanal” root beer, A&W and Bargs need not apply.


On this particular day the brand that caught my eye was Squamscot Old Fashioned Beverages (www.nhsoda.com) located in Newfields, NH. More than anything it was the old fashioned, not flashy, packaging that caught my eye. In my experience sodas that are less flashy on the outside tend to have a better product inside. The only downside is that the six packs were in the aisle, not in cold storage. Upon getting my bounty home I immediately placed a few bottles in the refrigerator and waited…….
When I opened the bottle I knew I was in luck the very quiet and short, psszzzzz that escaped made be sure that it was not over carbonated. This pleasant noise was followed by that sweet root beer bouquet that has just a hint of vanilla to it. The flavor was wonderful, root beer, vanilla, with just a splash of that spiciness that a good root beer has that for some reason reminds me of atomic fire ball cinnamon. After a long hot day Squamscot Root Beer really delivered and will be a staple in the refrigerator for the remainder of the season.

Since I love root beer as a beverage I figured I would search for an interesting way to cook with it. I found a recipe for Chicken Breast Fillets in Root Beer Marinade from the Food Network:

Ingredients
Marinade:
Directions
Combine all of the ingredients for the marinade and add the chicken breasts. Marinate for approximately 2 hours in the refrigerator.

Preheat the grill. Remove the chicken from the marinade and place on the grill. Grill until cooked through, about 5 minutes per side. 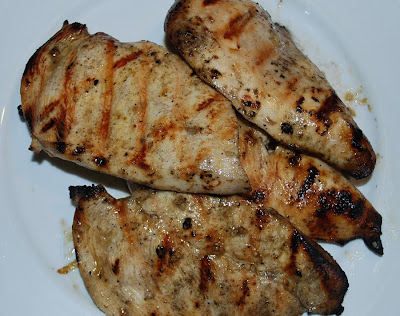 Though the serving recommendation was to have this in a bulkie roll sandwich style with french fries Jay and I opted to have the chicken as it was with some veggies on the side. While making the marinade I was thinking that the root beer flavor would most likely be over powered by the other ingredients due to the proportions, and I was right. Though there was a slight carmelization on the outside of the chicken the actual flavor of the root beer was almost indistinguishable. The chicken was very moist and the marinade gave it a light flavoring. Jay and I both agreed that though good, the marinade did not deliver much bang for the buck based on the preparation time and expense of ingredients used to prepare it.

Guess I will just have to stick with drinking my root beer until I find a new way to cook with it. Do you have a recipe to share?

I love root beer! We have a restaurant/brewery in my hometown that makes their own root beer. It's the best! I never thought of using it in a marinade. I think root beer floats are best :)

What a post, made me feel like crackin a cold one too! I drink Stewarts, which is fine by me, not sure if it would measure up to your standards. As for cooking with root beer, I just obtained a recipe for root beer chocolate cake. Will let you know how it works out.

I do agree with you dude. The pleasant noise followed by the sweet root beer bouquet has just a hint of vanilla to it.

I think we've still got a couple of root beers in the frig here in the office... I'm going to have to head that way :-)