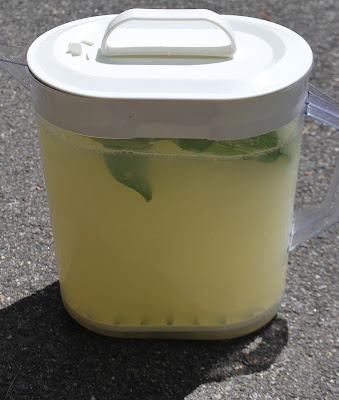 I love lemonade in the summer. I’ve made it many times and the variations have never strayed from mint and berry or a half and half with iced tea. That was, until this summer.

For simplicity in what follows my lemonade recipe is 1 cup of sugar, 1 cup of bottled lemon juice and water to 2 quarts.

I had pieces of leftover pineapple from the grilled fruit adventures. I added it, some basil leaves and made two quarts of lemonade. I shook it quite a bit and placed it in the fridge for the flavors to infuse for a while. The aroma was of savory tropical food and the taste was a wonderful blend of lemon and pineapple with a nice foundation of basil. I didn’t actually get a taste of this creation until the next day, but I had more basil lemonade a bit later in the day.

Sitting poolside with family I was alternating some homemade wine with plain old lemonade on the count of the heat. I ran out and queried my sister-in-law as to whether she had lemon juice and sugar for a refill. On the way in the house I saw her beautiful basil plant carrying some sizable leaves that needed to be picked. I asked if I could work some magic with them and received a strange face. A few minutes later I was shaking a way at a container of basil lemonade to some slanted and nervous eyes.

Those faces changed to smiles after trying some. Without a lot steeping time the basil flavor was subtle, but present. Very refreshing on a hot day.

Yesterday I made a gallon of sage lemonade to serve alongside other non-alcoholic offerings at a wine tasting we hosted at home. We made up the lemonade in the morning using two kinds of sage (purple and a traditional green style, a handful of each) and let it steep until early afternoon. The pitcher we used has built in mixing wand, which was used several times before serving to help the flavor infusion. The reception to this twist on lemonade was overwhelming, everyone who had it made a point to let me know that they found it to be extremely flavorful and interesting. I think a sage infusion happens more quickly and with that in mind I would take care not to leave the sage leaves in too long to ensure the flavor didn’t become overpowering. 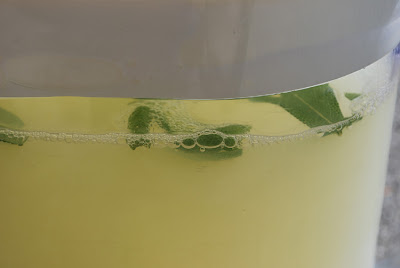 You could use this as a base for cocktails as well and a Collins or a whiskey sour are the first things that comes to mind. In the most recent issue of Imbibe magazine there is a recipe for a Tequila Sage Smash that is really a sage lemonade with tequila and sweetened with honey syrup.

All of these different lemonades sound fantastic! I really love the idea of adding pineapple.

I love lemonade in the summer as well :) Thanks for all the great twist ideas!

Oooo--basil in lemonade! LOVE it!

What fantastic summer drinks:) Love the basil here, must be amazing! Very creative and with such a wonderful twist...Love it!

What a great idea! thanks for sharing.