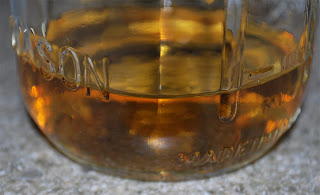 An infusion of vanilla was on my list of the last batch vodkas to make. One bean cut open sat in 8 oz of 100 proof vodka for 24 days and then it was strained. The color came out to be a nice gold. The reason the jar is nearly empty in the picture to the left is that because when the vodka comes out really food it doesn’t tend to last.
As for my bar tools, a big thanks goes out to the SavvyHost for my prize of a bar in a box set from the Foodie Night In event a few weeks back. A new drink was perfected with the new tools, which makes its debut even sweeter.
Meanwhile…
When the vodka was doing its thing I got to considering what to do with it. I decided I wanted “a drink” to herald this creation in. The first thing that came to mind was crème brulee. Two issues confronted me, first how to get a custard taste out of the drink, and secondly how to garnish the drink to give the impression of crème brulee and creating some flair for the experience. 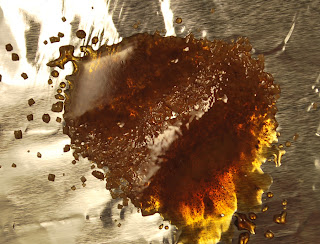 The first problem was solved with the use of CoffeeMate Italian Sweet Cream coffee creamer as the cream base for the drink. Some might argue, but for those looking to try it, consider the creamer only adds 70 calories and less than half of that in fat. That is for one drink, making it approachable for everyone. Back to the drink.
The vodka and a shot of amaretto to add some additional flavor and complexity and we have ourselves a nice egg custard flavor. 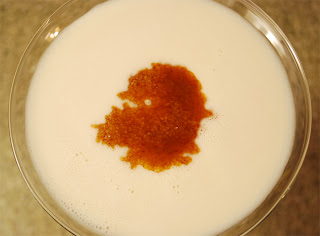 As for the garnish, a little bit of genius. Demerara sugar under the broiler to great some sugar chips to float on the drink. It works, it looks cool and it doesn’t dissolve in the drink so you get a nice caramelized sugar crunch at the end of the drink.
Mission accomplished!


A few weeks back I exchanged some nice messages with the SpiceSherpa about herbs and spices and how I was planning on using vanilla next. Margot and I have had a couple of events since, and my attention was more distracted that I thought it would and I didn’t finish my drink experimentation. The SpiceSherpa has a wonderful blog about creating your own vanilla extract which is effectively what I have done, except mine was intended for drinks. But it doesn’t have to be. Either way the aromas and flavors are so much better doing it yourself than the average product you can buy in the grocery store.
Ancient Fire Crème Brulee Martini

Shake and strain into a martini glass. Garnish with a sugar chip.

sounds unbelievable, can't wait to give this a try! yum!

Jason - that sounds fantastic! Connie's going to be bartending this weekend :-) Kate

Now this is my kind of martini!

Looks like a great dessert drink! Way to get creative.

Oh, wow. This is not even fair.