We continue with Beer Week today with Beer Sorbet and some tech talk for food bloggers about Google’s new Recipe Mode.

I made a beer sorbet earlier in the week, or at least I tried to. It didn’t set so we drank it like a frozen cocktail. It was OK, but not what I was going for. I am in the process of making it again with a slightly re-jiggered recipe and process that should overcome the issues. I am going to use this recipe for an example of Google’s new Recipe Mode. Here’s some background on that.

Last night I had a vibrant exchange with several food bloggers on Twitter about Google’s new recipe mode. It started because I saw a tweet that said it was unfair to small bloggers. I asked to have that clarified because I wasn’t sure what the angle was, even though I was fully aware of the open debate on this new service and recipe posting requirements. It boiled down to small bloggers not having the time or skills to reformat recipes, old and new, into this format in order to have high ranking in the search engine.

Here’s my problem. Google's search engine is free to use and they don't charge for rankings. There has been plenty of debate about companies that spend money on SEO and trickery trying to gain and keep the top spots. Fair enough. We do still live in a world where money talks and people who think community trumps that obviously don’t even know their own communities that well. Google looks for and punishes offenders so it is as “fair” as it can be. Ad banners and stats monitoring breeds competition, and it can be fierce. I hear a lot of people say they do it because they love it, but then fuss over traffic and comments. Get real!

For food bloggers though, not having the time or skill to use a new service that comes along ends up being a choice. The service is free (I am going to keep saying that) so people have to decide if they want to participate or not. Not participating because you feel as though your creativity and style is where you want to focus is a solid personal AND business oriented decision. This doesn’t mean what Google is doing is unfair. You can’t have something for nothing and this age old rule applies here.

The debate rages on, but there are also solid examples and “how-to” posts that are supportive of how to make the choice.

That said, the issue of Google’s move being antithetical to food blog style and creativity is way overblown. And I know why. The format and examples of the new Recipe Mode are technical because it uses markup language (code for the non-techies) under the hood and it looks menacing. I agree that code can be a bear to deal with. I’m and IT guy and I live and die by being able to code for my customers. But that isn’t the end of the story. Guess what, some enterprising folks have already created helpers to ease some of the pain. And more will come. And then everybody will be doing it and taking it for granted! Oh, and did I mention this is all free and the format being put forth is almost entirely optional so the tags (code) you are required to use is a short list?

The missing piece is for someone to demonstrate that the examples you see are a guide not a literal interpretation of exactly what every recipe has to be formatted like. They aren’t saying that, and food bloggers need to stop and think for a second about why they have gotten that impression rather than investigating how the creative and tech worlds meld here. I don’t know why anybody has to say this to people who use blogging platforms, SEO, ad banners, search engines, Twitter, URL shorteners, smartphones, etc. We use so much technology to be creative already, what’s the difference here?

I am going to take the long hand approach. That is to format my recipe as would normally format it in my post and then switch to HTML mode and make some changes to the recipe tags so that when Google scans it for Recipe Mode that it works. Ultimately a helper that could generate the different pieces in code so that you could copy and paste where and how you wanted would be even better.

You do need to add the style definitions to your blog’s stylesheet, but that is a onetime change and something that is done regularly by bloggers who want a pretty site. A complete list of all the possible tags exists for convenience. And get this, there is a test tool to allow to see what the preview for a recipe would look like and whether you have all the required information. This would seem to be a clear example of breaking down the barriers to this process. It clearly is a choice and not one with a burden that is too high for tech-savvy bloggers to bear in my opinion. 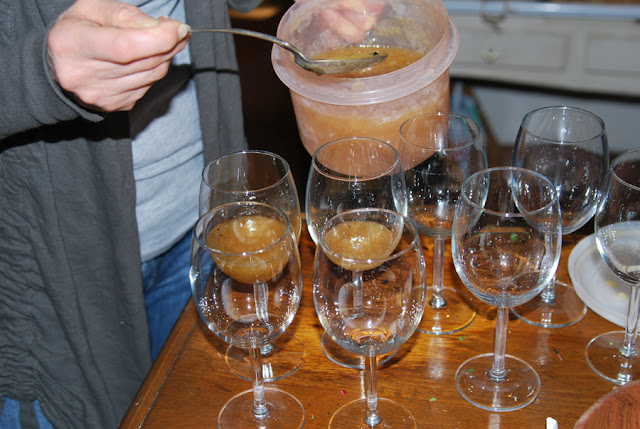 Scrape the seeds from the vanilla bean and combine with the first 3 ingredients.
Process in your ice cream maker according to the manufacturer’s instructions.


Total time: 2 hours
Author: Jason Phelps
Published: March 25th, 2011
Dessert
It didn’t set even after being in the freezer for a long time. Why? Maybe too much sugar. I make 2X simple syrup and sugar acts like antifreeze. The alcohol doesn’t help either, but that was much less of an influence due to volume.

Now, some of you might look at the recipe above and say “I style mine differently and that format is too rigid!” What format? The above is how I post my recipes all the time. I added some tags for a more complete recipe for the search engine, but they don't really affect how my post that contains the recipe looks! Google’s required code is in there and it didn’t require me to change my recipe at all. Furthermore you could stretch the ingredients out over a whole post, instead of in a list, and the instructions could be paragraphs of steps intertwined with greatest prose ever to exit your fingertips. Google doesn’t prevent this. You can still be creative and get ranked.

Here is the recipe and process I am using for my second attempt. 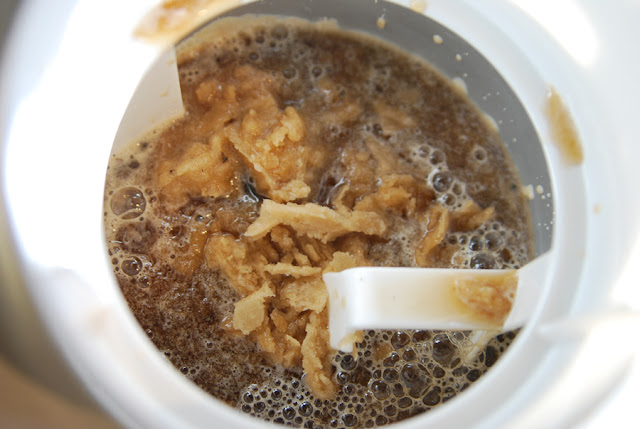 Scrape the seeds from the vanilla bean and combine with the first 3 ingredients. Chill in the freezer for 1 hour, stirring twice. Process in your ice cream maker according to the manufacturer’s instructions. 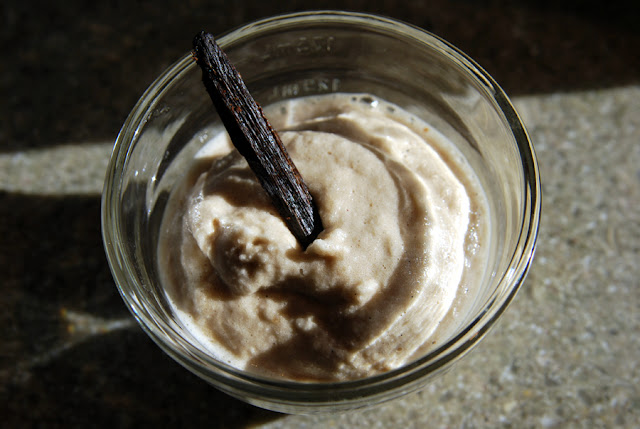 The new recipe and process worked out much better. The amount of air that was trapped in the mixture as it froze is incredible. It is so light and creamy. I can’t wait to serve this to my wine tasting guests tomorrow! The taste is different between the Stout and The Trappist style beers. Both give me lots of ideas of other flavors to mix with different beer styles to create sorbets that could be used between courses and not just for dessert!

As I said above, a helper tool to facilitate some of the code generation and even plug-ins that hide all of that for you will go a long way to making this process seamless. And they will come. I am sure some enterprising IT foodie is out there right now improving on everything that has already been done overcoming the issues that remained. For now folks that don’t have the IT savvy to do this should keep an eye out for contributions from those who do and wait until it gets easier for them to participate. Don’t cry foul, this is a free service that is technology based. You can’t have your cake and eat it too!

Jason
Posted by Jason Phelps at 9:27 AM

I love that you made Guinness sorbet! I make a sundae with pumpkin ice cream and guinness caramel sauce and I think a scoop of this sorbet would make it even better!!!

As I think you know Jason, I own a web company. So this issue has been of concern not just to me as a food blogger but also because a great majority of my clients are as well.

If it needs to be done, so be it; I'm weary of the whining and expectations that others should come up with an easy fix. I'm on the same page as you are with 'free' services (like if this site disappears one day and you have no recourse...who ya gonna call?) - I've always found it hard to fathom how much complaining I hear about Twitter and Google mail when there are issues...hey, it's FREE!

What I do take some issue with is the fact that Google apparently thought it behooved them to notify larger sites and aggregates a year ago..the issue is that they have had that time to input the new information and for some reason food bloggers were only privy to it a couple of weeks ago.

That being said...users have to start using it for it to have am impact. Yes, some of my highly ranked recipes are nowhere to be found if using the Recipe search but according to my stats it does like there has been a bit of 'the sky is falling' mentality when in fact I haven't noticed a change in those results.

What does bother me is that Google made the information available to a lot of sites before taking the indexing public and now food bloggers are having to play catchup. They made their own class distinction and even with the argument that they have a right to do whatever they want to with their free product that hit a lot of folks hard.

I'm not keen on any of the products I've seen thus far to help; and really, coder or not...there is a minimal amount of html to write a recipe to include that information; it's probably time for people interested in getting it right to delve into that minimum.

I appreciate your post. While I am in the same camp as VinoLuci, why whine if you don't have to, I still will support tweets from small players. It's called support for a reason. If my small level of support will help them over the "it's not fair" bandwagon and on to doing it right so be it. If not, they'll dwindle away naturally anyway. I always root for the underdog I guess because I've been there and know what a few kind words of encouragement can do to help one over the tall hills.

I'm not a fan of using the 'not fair' mantra however. If life were fair we'd all weigh 400 pounds and have dyslexia. We don't and it isn't. So as you say, use the tools available to you and get over it.

So, Jason, I'm one of the ones who FB chose for the New Belgium Brewing recipes. My first idea was beer ice cream - followed by a pork sandwich then beer bread turned into some different things... So, I couldn't sleep and just spent two hours on the internet researching proportions for ice cream, beer cheese soup and beer bread. What's one of the first recipes I see when I sign onto FB? Your beer sorbet. Looks great! Please keep your fingers crossed for my ice cream :-)

I bet this was tasty and perfect for the St. Patrick Day Holiday!!! I must try this!