I’ve decided this week is going to be beer week at the Ancient Fire Wine Blog. Why? Because it can be. Spring is on the way and I’ve already started thinking about grilling and backyard parties. And that of course makes me think of beer. So why not take a week in the early spring to celebrate transitioning out of the darker winter beers into the lighter spring and summer beers?

I’ve got a week full of beer posts on deck including a guest post from the Portsmouth NH area beer blogger with a great local beer story. I also have reviews for 10 beers from both domestic and foreign sources that have been recently tasted, a recipe for beer sorbet to try out and some NH brewing history to share. It should be an action packed week, and I hope if you like beer that it gets our imagination going about what you want to drink the next time you can sit outside in the sun to enjoy it! 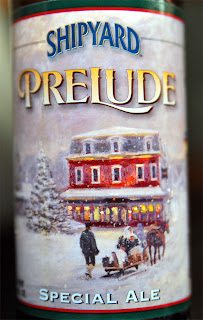 I am going to kick-off beer week with full on winter beer, Prelude from The Shipyard Brewing Company. This richer, heavier beer will be my line in the sand for us to move into a new beer season from.

I had my first taste of Prelude at the NH Brewers Festival last fall. I enjoyed the richness and malty flavors a lot. As soon as I came across a bomber of it I snagged it and sat on for a bit. I cracked that bad boy open two weeks ago and was instantly reminded of why I liked this beer, the aroma.

The toasted malt aromas jump out of the glass with this beer. It has a nice medium brown color and pours with head, but not one that last that long. I picked up flavors of molasses and maple which are very round and supple due to the sweetness in the beer. This full bodied beer does in fact have some acidity that seemed transformative because the molasses flavor is only present on the back end and not before. There definitely is some nuttiness to this beer, and when it comes to hops you know they are there, but they are very restrained.

At 6.7% ABV this beer isn’t super strong, but it isn’t weak either. Brewed as a specialty winter beer since 1993 you can typically find the new batch in your local beer store starting in November each year.

I was very sad when the last sip went down, but I know for sure that I will be picking more of this up for next winter. I might even make it my winter warmer with which I will greet all visitors weary after winter travel!

I hope you will check in every day this week for something new in the world of beer. I sat down with a brother-in-law of mine on Saturday and we tasted 11 styles of beer from all sorts of places. The stories, quotes and tasting notes should end up being a laugh-out-loud read. Check for that later in the week. Tomorrow Brian from the Seacoast Beverage Lab, guest posting for the first time, will share the story of a special beer day in Portsmouth, NH.

Jason
Posted by Jason Phelps at 7:25 AM

I really like Prelude and I wish I bought a couple to last me through cool spring nights and to save me from some of the less appealing summer beers. Good review!