Ancient Fire Wine Tastings Are Back! 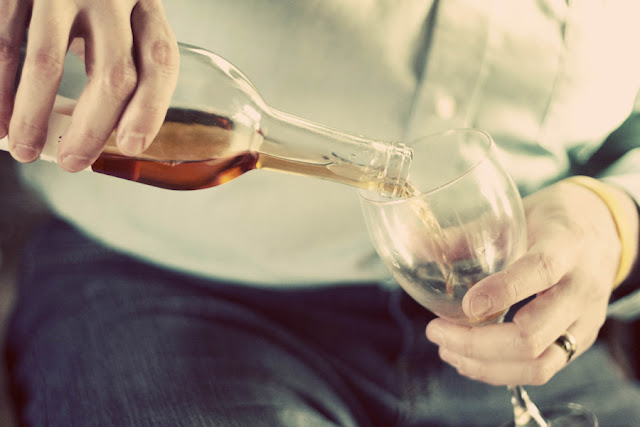 ( Brian has a great eye for a shot. )
It’s been a while since we had wine tasting at our place. There weren’t any particular reasons for that, it just kind of happened. This past Saturday we gathered a crew of new and veteran Ancient Fire tasters together to enjoy some good food, good wine and great conversation. 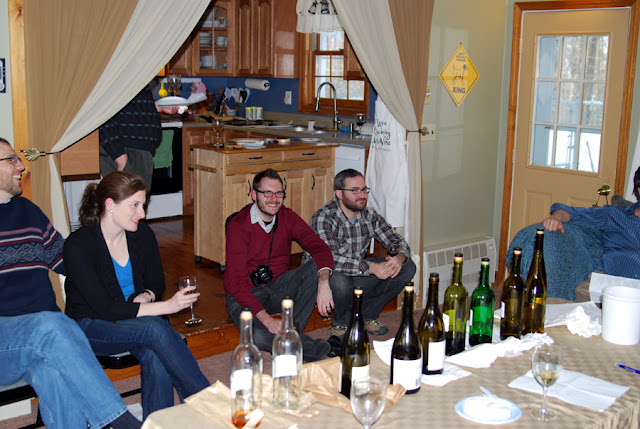 ( Smiles are always a good sign! )
There were two themes with this tasting, snacks with cheese in them and blind tasting. The blind tasting was based around a mix of commercial and homemade wines and would offer everyone the opportunity to see how many wines they could classify correctly. I was interested in how well I would recognize my own wines against similar styles from commercial producers. 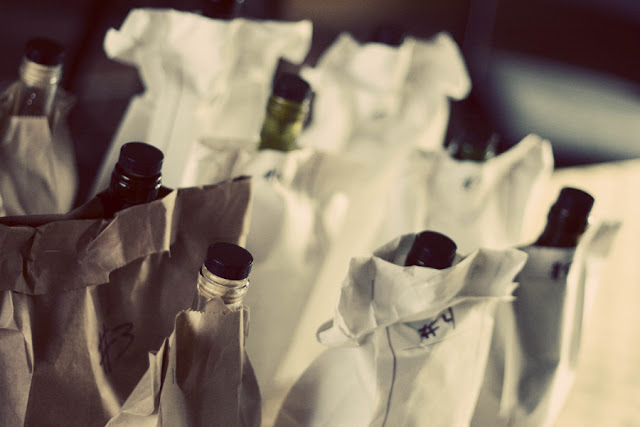 ( Just waiting for us to dig in! )
The wine lineup consisted of the following:
I was excited to have Brian from A Thought For Food join us for the tasting. His interest in my Jalapeno Dessert and Chocolate Raspberry Port wines resulted in us meeting up for drinks a while back. We both enjoyed the social time and agreed it shouldn’t be the last time. Both he and Eric made the trip up from Southie to party with us, and I am pretty sure a positive impression was mutual! The rest of the tasting crew, Ed, Jim, Amy, Brian, Wayne, Meredith, Richard, Missy, Melanie and Margot have all enjoyed a number of our wines before and always approach our tastings with curiosity and excitement. 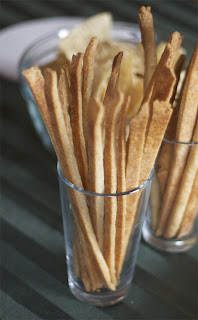 We had just enough food (it seems so often we have way too much) and an excellent diversity to enjoy with the wines.

Rosemary Cheddar Straws (I made these, and will share the recipe later in the week)

Make your own fruit skewers

The best pairing was the Chenin Blanc with the baked Camembert. That wine was a late addition after Wayne asked me about the Vouvray Margot reccomended he try. We had had it at Christmas and she loved it so much she was passing on a solid find. While not quite the same style, my South African Chenin is nice and soft with lemon flavors and just a hint of residual sugar. Up against the earthy cheese and sage affected onions, all were taken to a new level. The cheesecakes with the Strawberry wine were also a good match, but I felt the cheesecakes were too good on their own. The cheese straws were best for me with the reds, especially the Chateau du Roi. The rosemary and baked cheddar flavor weren't lost in the wine, which added a bit of spice to amp up the cheese flavor. 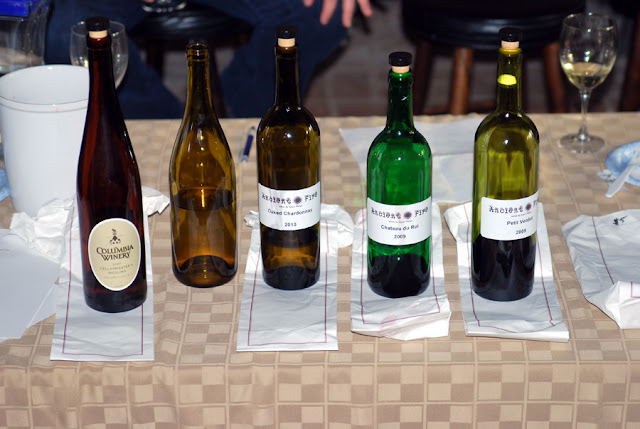 ( Some bottles got hit harder than others. My reds poured well this time too. )
Margot bagged up the wines so that I wouldn’t know what was what. I did however know what was included so it wasn’t truly blind for me. I was able to guess 8 out of 10, with the two I swapped creating a good deal of curiosity as several others mixed up the same commercial and homemade selections. These two ended up being the Rhone blends. I thought for sure the drier, more acidic selection was my own, but it ended up being the Chateau Beauchene. Having spent the last week tasting Cotes du Rhone wines I was heartened to find that my own version was truer to those I had tasted from the source. I’d surely make that wine again because I definitely enjoy the style. 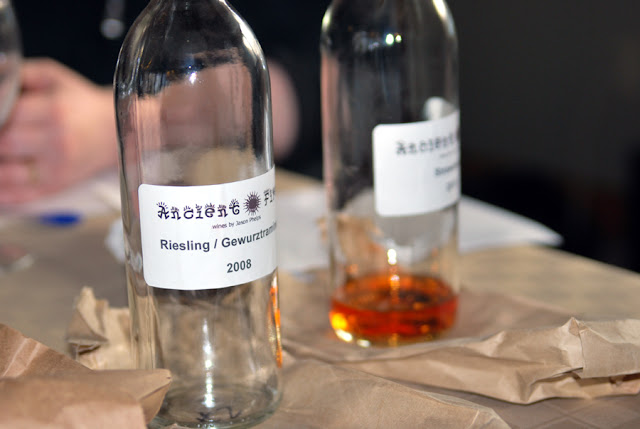 ( One empty and one almost. Definitely a message! )
My strawberry wine is an easy giveaway, but my purpose for including it was to get feedback on the newest vintage which again underwent some recipe tweaking from the year before. The consensus is that I have truly nailed it and improved on it once again. Accomplishing this mission for my flagship wine is a very proud moment for me. Otherwise it was pretty much split as to how many folks could classify the wines as mine or from a commercial producer. My Riesling/Gewurztraminer Blend fooled several folks and based on the feedback should be on my “make” list for 2011.

My heavily oaked Chardonnay wasn’t a big hit, too smoky and too buttery, but when I asked how many people had drank that style in the 70’s and 80’s (we are all too young!) and explained that is was in vogue for a time, it helped with a little context. I also added that there will be some excellent summer BBQ parings, like turkey burgers and smoked turkey, most tasters agreed to revisit it and see how it goes. The Rodney Strong Chardonnay was also oaked, just not as much, and a few tasters compared it and felt that the difference was noticeable, but not extreme. I expect, and hope, my version will calm down a little bit in a few months. 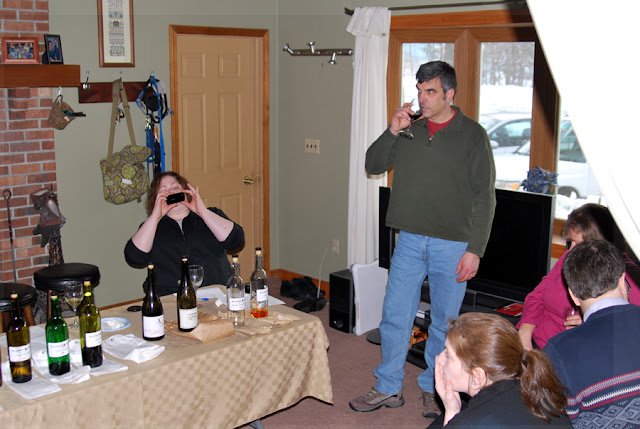 ( Richard was digging my Chateau du Roi and appears to be studying it. )
We had a second unfortunate experience with mead from Isaak’s of Salem. The bottle of Popp Road Raspberry poured like a champagne and after two hours of breathing it still poured the same way. There were no flavors in the mead, it was immensely dry and had some off aromas, something Margot likened to perfume or rubbing alcohol. Clearly something has gone wrong and the remedy offered in response to the first experience we had with the carbonation in the Sweet Tooth, let it decant for 30 minutes, was not successful here. I tasted this several months ago and was able to enjoy the raspberry flavor and subtle honeyed sweetness that was intended for this product. I was sad that I didn’t end up being able to share that with my friends. 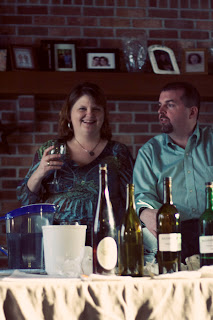 As always the socialization and conversation was the most fun element to the tasting. Margot and I had the chance to share tales from France with the slideshow going on the computer. Being able to say you stood inside a building that is 1,000 years old, is pretty cool any day of the week!

Our next wine tasting on March 26th will be a fundraiser for our Relay For Life event. Margot and I will supply the food and wine as a thank you to our family and friends for supporting us. Guests are being asked to make a $20 donation, either by check or online, as admission to the tasting. I am also hoping to have folks join us on Twitter during the tasting, raising a glass in support of the fight against cancer.

I also have to thank Brian for taking several great photos (#'s 1,3,4 and 8 in this post) and applying a set of stunning effects to make the pictures look vintage. Be sure and check out his portfolio of photography at http://www.briansamuelsphotography.com/.

Wish we could have been there. Next time hopefully. Looks like you had a good time.

This looks like a lovely evening. I'm a new reader. Do you make all of your wines yourself? Do you sell any?

Oh how I wish I could play! I need to create a party like this for friends. A dream job would actually be starting a tasting party company..how fun would that be!

I must be out of vogue. I love a buttery oaky chardonnay, especially with something like grilled salmon. My tastebuds have matured in the wrong direction.

Aaaaw, I wanna come. Brian was there??? I love Brian. You know Brian in person??? Petite Verdot??? Dang. So sorry that we live across the country from one another, because I would so have dug this.

And Judy, when I first started tasting wine back when I was young, I didn't think I liked it at first because it was all big, buttery Cali Chards, and at that time all I could taste was rough oak. Now, I completely am in love with those Big Boy Chards,and i proudly proclaim it, in vogue or not. The Chard grape isn't making sense to me in stainless! What a switch.

Thanks, Jason, for sharing this time with us. I'd buy a ticket to your event!!!

Looks like a very lovely time with a wonderful wine selection...